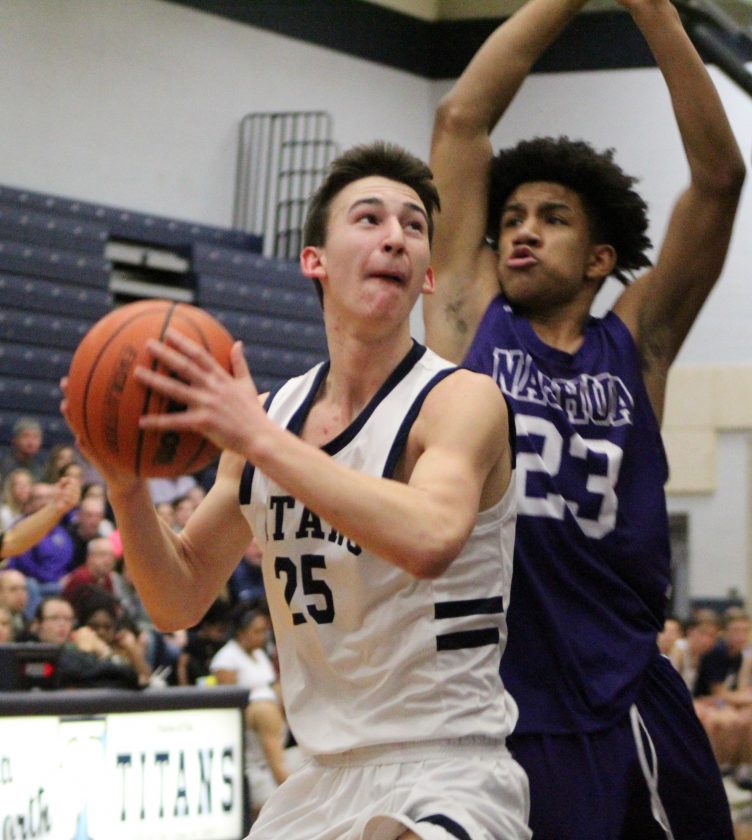 Telegraph file photo by TOM KING Nashua North's Nate Kane and Nashua South's Jeremiah Mitchell will be back to face each other again next season.

We don’t know who the best teams in all the respective high school boys basketball divisions would have actually been this season.

After all, that’s why they play the games.

Assuming things will eventually be normal enough to forge ahead next winter, who would have the inside track locally? Nashua North was a three seed and Bishop Guertin a fourth in Division I with identical 14-4 regular season records, but all five local teams made the tourney in what was a stellar year.

In Division II, Hollis Brookline was a stellar 15-3 after a rebuilding year the previous season. Milford and Souhegan (9-9) were both very competitive. Campbell recovered from a tough start to go 12-6 while Wilton-Lyndeborough struggled but still made the tournament at 6-12.

Here’s a look down the road:

It would have been fun to see which local team or teams emerged as a possible title threat to top seeds Exeter and Portsmouth. The area was guaranteed a team in the semis as North and Merrimack were to meet in the quarterfinals before the tournaments were cancelled.

We could be looking at perhaps an even better year in the Nashua city limits with Bishop Guertin, Nashua South and North all primed to be contenders.

Ah, the Titans. They are the team many will look to next season, despite the loss of highly athletic senior Brenden Choate and 6-3 inside grinder Gabe Buxton, among others.

“They have a lot of people coming back,” Alvirne coach Marty Edwards said. “They could be a juggernaut.”

How bout the Nashua South Panthers?

“It was a very good year,” South coach Nate Mazerolle said of his 11-7 team that also earned a tourney win at Winnacunnet, playing their last six games on the road. “My coaching philosophy is you want the team to play better at the end of the year than at the beginning. And at the beginning, we weren’t a very good team.”

The Panthers will lose a couple of the inspirations behind that surge, including seniors Andres Hulfachor and Ivan Nyantenji. But Mazerolle was working to give sophomore Alex Hulfachor the confidence to take over games at some points, Junior guard Jaden Murphy was an intense defender, and Mazerolle was beaming about the progress 6-7 sophomore Rhett Meddling made. “Rhett Meddling had a fantastic second half of the season,” Mazerolle said. “He’s going to have a monster year as a junior.he said. “And we had some sophomores that made progress at the JV level.” There’s an X-factor as well, as injured junior Cody Rochileau, highly regarded, came back late in the year and could blossom as a senior.

Can Merrimack repeat its fine season? The Tomahawks lose eight seniors, including the ever athletic Jared Dyer, who will playing football at Holy Cross, and supreme defender Adam Ellis. A senior team if there ever was one, but did anyone expect the ‘Hawks to win 12 regular season games at the start of the year and be one game away from the Final Four?

And, of course, no one expected Bishop Guertin to be a top four team, either. Head coach John Fisher got a lot of mileaage out of seniors Kyle Baker and Sam Mullett, but one of the real keys to the Cards’ success, it seemed, was the play of junior guard Dylan Santosuosso. Guertin has the potential of putting nine seniors on the floor next season.

The Broncos had a semi-rebuilding year but like South, they got better in the second half of the season to finish 9-9 and upset Bedford in the first round. Edwards is very optimistic about next season with the return of stalwarts such as 6-4 junior forward Liam O’Neil, 6-1 junior Jacob Hibbard and guard Charlie Thomas.

“And we’ve got a lot of sophomores that we like,” Edwards said. “We should be a top eight team next year if all goes right.”

Will the seacoast still be the strength? Portsmouth loses some of its strength but has tough players like Coleman Brewster and Kevin Cummings back. Exeter has had a great pipeline, and junior Matt McConnell is back. And, as Mazerolle said, “You’re looking at a very good Winnacunnet team.”

And another very good season all around.

One wonders just how far the Cavaliers, led by the one-two punch of seniors Grant Snyder and Max Stapelfeld, could have gone. They also had the Wimmer brothers, Sander and Quinten. Junior Adam Razzaboni is one of the players they’ll have to look to next season.

Milford and Souhegan will try to fill the senior void as well. Junior Michael Philbrick will be a key coming back, but losing the trio of Gavin Urda, Jake Gresa and Christian Jones is tough. But has Spartans coach Dan Murray ever put a team on the court that the opponents aren’t worried about?

The Sabers had some talented juniors and could have as many as seven seniors on the roster next year, perhaps led by Matt McCool. This team could improve on those nine wins and, like Milford, early tourney exit.

“We lose our entire starting lineup,” Cougars coach Frank Girginis said. “But we’ve got a good nucleus of kids who will be sophomores and juniors next year. We’ll be young again, but that’s OK.”

And one senior, William McPherson. But bloodlines are always big at Campbell, and Brady Mills and Dylan Rice could be keys as juniors – yes, brothers of current seniors Keegan Mills and Brendan Rice.

The Warriors will have the duo a Sean and Troy Brennan coming back as juniors (they were top athletes on Warrior rosters as eighth graders).

They’ll need that help after losing one of Division IV’s top scorers, Jack Schwab. That’s the biggest graduation loss for perhaps any local team, but there should be enough athletes coming back to help make up for it.