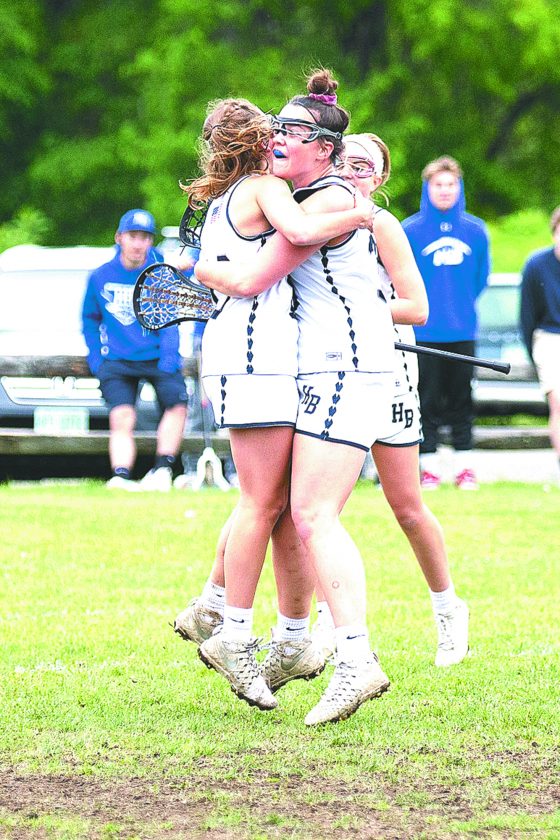 Courtesy photo Bonded by the game of lacrosse since second grade, Hollis Brookline High School seniors Paisley Broadhurst (left) and Tasha White (left) have hopes that their 12th varsity season together for Cavaliers does not get washed away by coronavirus.

For many high school seniors, the separation anxiety kicks in after graduation.

For a pair like Hollis Brookline High School girls lacrosse captains Tasha White and Paisley Broadhurst, the spring season – or currently the lack of one – has pushed that urgency straight to the front of the line.

Teammates since White convinced Broadhurst to try the game in the second grade, these best friends from Brookline share the same frustrations and disappointments of so many others this spring as coronavirus takes its toll.

“The going is pretty tough,” said Broadhurst. “Like everyone else, we’re just trying to hold on and hope.”

White and Broadhurst had big plans for this spring, their 12th varsity athletic season together at the high school.

They created an HBHS Lax Instagram page and had sent out preseason challenges to prospective members of the team.

“I’ve felt that since we came in as freshmen, we set a tone for the program,” said White, noting that the two besties and classmate Victoria Bruzik amped up the energy in lacrosse almost immediately four years ago. “I think people saw how it was almost right away. We’ve been leaders, helping to build the program.”

An athletic youngster, White, who moved to Brookline from Northern California as a pre-schooler, got into the game of lacrosse via a neighbor, current HB varsity coach Jim Maxwell.

She invited Broadhurst into the lacrosse world, and the two skyrocketed.

“We were two of the better players right from the beginning, and I wanted to do all I could with her,” said White. “We’d partner up together in drills, always working together.”

Through grade school, they were inseparable, not just in lacrosse but in soccer. Rec leagues, town teams, club teams, travel teams, the two excelled and they did it together.

Each played four years of soccer, and both closed out their careers this fall as captains and first-team Telegraph All-Stars with an HB team that went

The winter season could have been considered down time, a time to ease off.

Instead, White and Broadhurst chose to pick it up.

As freshmen, they played unified basketball for the Cavaliers.

They swam with the varsity for three years.

But it’s been the spring where the two midfielders have pushed it to the limit.

And that’s why this delay and potential loss of the season hurts so much more intensely.

“It’s really unfortunate,” said White. “What are you going to do, though? Hopefully, the date stays at May 4. If it stays May 4, I’ll be happy about it.”

Once the season ends and once graduation hits, these two close friends will make the move apart.

In the fall, White will study animal science at Virginia Tech, while Broadhurst will enter the business school at the University of Vermont.

Each has plans on continuing to play lacrosse at the club level in college.

“It’s definitely going to be hard to adjust to things and being separated after so long,” said Broadhurst, noting that they will somehow find a way.

“We’re very tight, best friends,” added White. “She’ll be at UVM, and I guess that’s not too far away when I come home.

“All I know is that it’s going to be tough without her.”