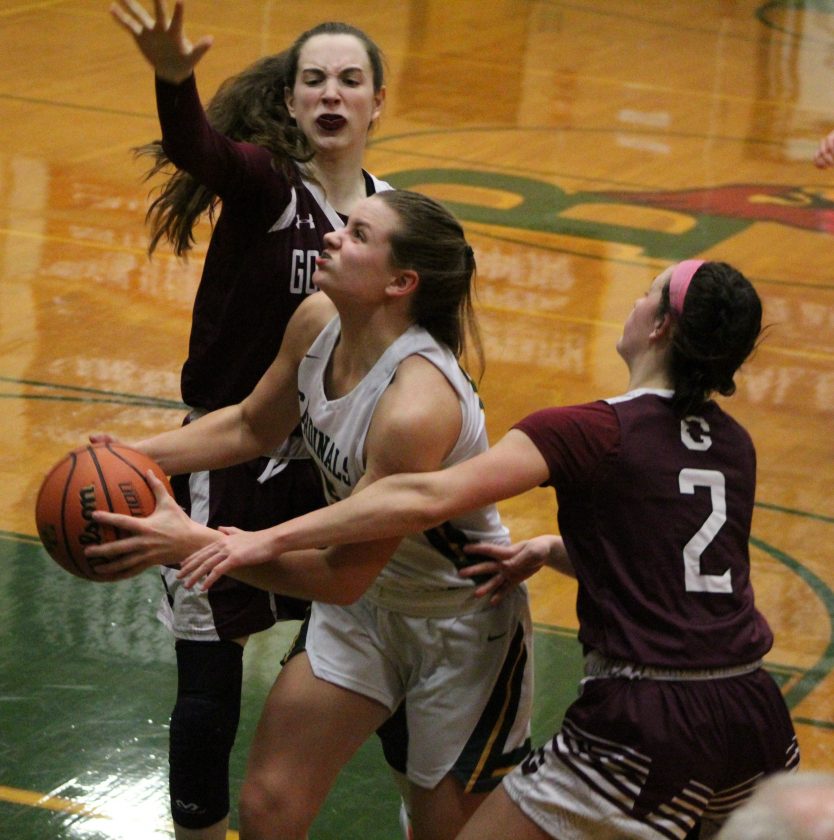 Telegraph photo by TOM KING Bishop Guertin's Addison Smith tries to drive to the hoop against the reach of Goffstown's Emma Strong and Shannon Gifford (2) during BG's 70-36 regular season finale. The two were named Divison I co-champions and a virtual reality video game between the two will be aired on TV in both Goffstown and Nashua on Friday night.

Local high school girls basketball fans may be able to enjoy a Division I state championship game after all.

Friday night at 7 p.m. Goffstown TV is planning on airing a virtual Goffstown-Bishop Guertin girls hoop state title game, and it is slated to be simulcast also on Nashua ETV, Ch. 99.

It may also be streaming on YouTube and Facebook. Guertin and Goffstown were declared co-champions by the NHIAA as the highest remaining seeds in their respective semifinal brackets.

The 18-1 Cards were Division I’s top seed and heavy favorites to win a fifth straight title, set before the COVID-19 pandemic forced the NHIAA to cancel this and all other tournaments. BG was set to play No. 4 Bedford (17-3) in the semis.

The 14-6 Grizzlies were the No. 6 seed, the highest remaining seed in the other bracket,set to face surprising No. 10 Londonderry (12-8) in the other semi before the plug got pulled.

How is this happening? It’s the creation of Goffstown High School junior Broden McCune and his dad, Goffstown TV Administrator Adam McCune. Broden also works at Goffstown TV as well.

Broden is using a version of the NBA2K20 video game and converting it for creating the girls state title game.

Adam McCune said he got the idea thinking back to when there was the NBA lockout back in 2011, the Dallas Mavericks’ radio network broadcast simulated games on the radio.

“I thought back then it was fun,” McCune said. “And I said to myself, ‘Hey, having the schools play, we could do that. We could make custom rosters, custom art.”

So he and his son went to work, probably more so Broden.

“It took a lot of effort on his part,” McCune said. “He went in and created each player on each team.”

There is one thing that might not be completely real.

“The way he had to do it, using the video game, every girl is in a pony tail,” McCune said with a chuckle, adding that there will an arena look to the virtual venue with Goffstown’s logo at center midcourt.

Broden McCune, Adam said, got as many statistics as he could compile, and got the full rosters from both teams. He also talked to players on Goffstown to see who the top players on Bishop Guertin were (mainly senior Erin Carney – the Gatorade Player of the Year – and fellow seniors Bri Wilcox, Addie Smith and Hannah Muchemore, to name a few).

In real game action, the Cardinals rolled past the Grizzlies 70-36 back in the regular season finale for both.

Of course, there were no guarantees that the two teams would have met in a real final; Londonderry stunned No. 2 Merrimack in the quarters but did lose to the Grizzlies 58-25 during the regular season, albeit way back on Dec. 23. Guertin had beaten Bedford 65-46 on Jan. 3.

But of course, reality likely isn’t the goal here.

“(Broden) tried to keep it fairly real,” McCune said, “But I can almost guarantee you Goffstown is going to win. The game is probably going to be higher scoring than usual. I’m pretty sure (Walsh) is going to score a whole bunch.

“So people in Nashua may not be too happy, but we’re doing it for fun and to help boost morale. We’re going to make it as fun as possible.”

And again, plans are to air it Friday.

“Hopefully,” McCune said, “we won’t have any technical issues. It should be fine.”

And the only game in town.