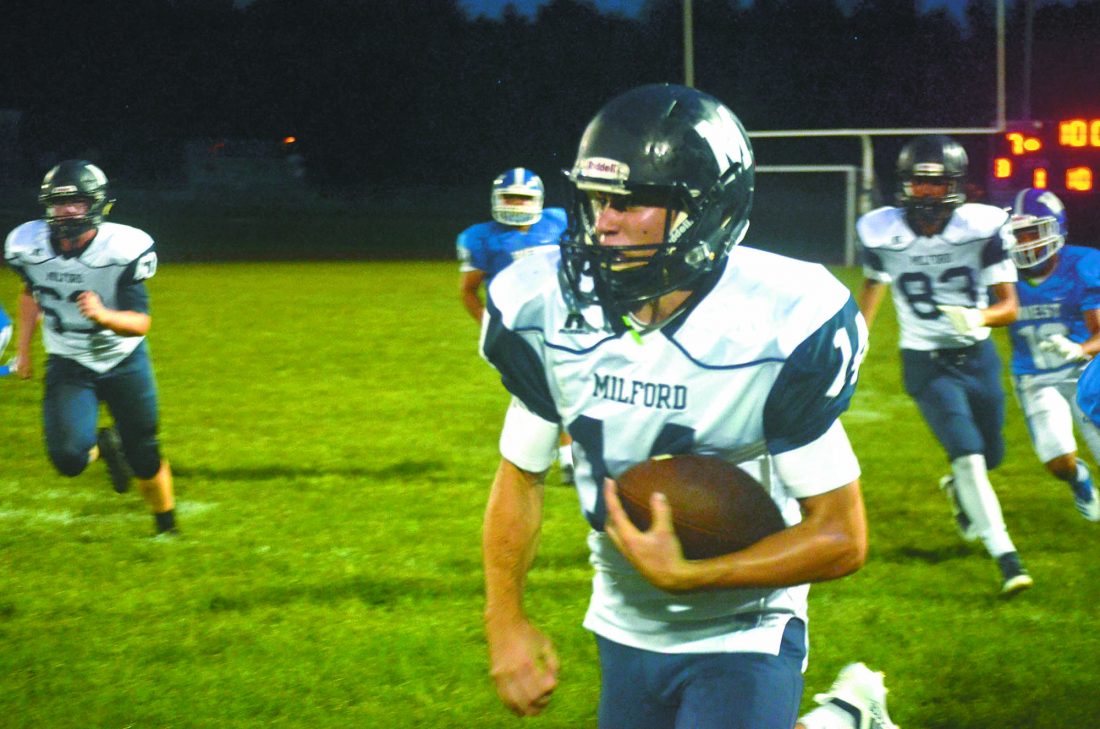 Telegraph file photo by HECTOR LONGO Milford’s Gavin Urda is one of the most dynamic athletes in the Granite State. He is giving UNH football a shot.

One of the biggest fish in the smallish Division II South Conference pool is heading for the Seacoast and open water.

Milford High senior Gavin Urda, a two-time all-state football selection, has accepted an honor to be a preferred walk-on and attempt to play his college ball at the University of New Hampshire.

“I’ve been invited to camp, I have a spot, I’m just not on scholarship,” said Urda, explaining his status at UNH, one of the premier FCS programs in the nation annually.

“When I went there on my visit, I loved it. They treated me very well. I liked everything about the program.

“UNH and Saint Anselm were the schools that recruited me the most. In the end, I couldn’t pass up the chance.”

Urda, a four-year varsity player for the Spartans, helped lead Milford to the Division II South championship with an 8-1 regular season mark. Milford eventually fell to Alvirne in the playoffs.

An option quarterback this fall, he ran for 1,104 yards and 19 TDs while starting at safety on defense.

“It’s definitely going to be a challenge for him,” said Milford High head coach Keith Jones.

“The kid is determined, and I don’t know anyone who is going to work harder at it.”

At UNH, he projects to either a cornerback or receiver, according to the coaches.

“I played a little receiver in my sophomore year, so that’s going to be a big adjustment,” said Urda.

“It’s definitely a big challenge, just with the athletes that are there. They’re bigger, stronger and faster than anyone I’ve ever played against. New playbook, new system, and a big change going from the top as a senior high school back to the bottom as a freshman in college.”

Growing up, Urda has always kept an eye on UNH football. Now, he’s got an opportunity to be part of such a rich tradition.

“Right now, my biggest thing is putting on weight, eating right, working out and staying healthy, all the way to camp,” said Urda, who will start with an undeclared major in Durham.

He’s also made a big decision in helping that out, switching from lacrosse to track and field this spring.

“I just want to keep running and stay in shape,” said Urda, whose senior hoop season ended on Monday night in the Division II playoff opener. “I’ll do sprints, you know, the 100 and 200. My brother Max did a little triple jump and long jump, so I might give them a try.”

Urda will join his senior classmates/teammates JR Ughu and Colton Burrows in the CHaD Senior All-Star Game this summer, a game that is played on the turf at UNH’s Wildcat Stadium.

“Playing with those guys one more time, that’s going to be a lot of fun,” said Urda.