The NHIAA announces all tournaments are suspended 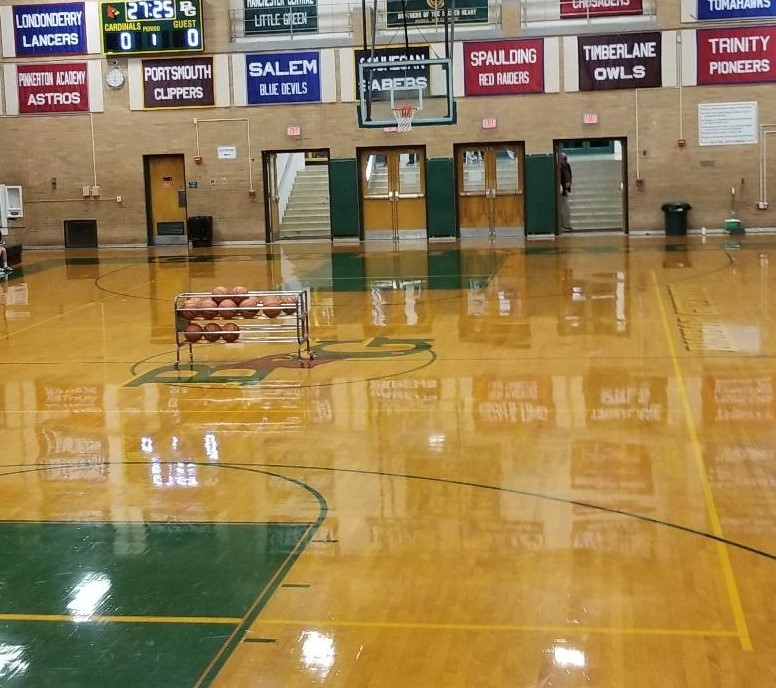 Telegraph photo by TOM KING It certainly looks like basketballs will go unused and courts, like the Colligadome at Bishop Guertin, will stay empty as the NHIAA suspended tournament play Friday until further notice.

Just a day after being somewhat adamant that everything would be done to keep the high school tournaments going in the wake of the COVID-19 pandemic, the New Hampshire Interscholastic Athletic Association reversed course Friday morning and suspended all tournament play.

The statement issued just after 10 yesterday morning was brief.

“All NHIAA Tournament games are SUSPENDED until further notice,” it read.

First, there was word that while the NHIAA had instituted a policy of allowing four family members into events per player, schools in the tournaments still using home courts – that would be in last night’s postponed Division II and tonight’s now postponed Divison I boys basketball quarterfinals -were ready to lock out fans completely.

Nashua North, per order of Superintendent Jahmal Mosely, was one of those.

“We started to hear that schools of the higher seeds were not going to allow any spectators,” NHIAA Executive Director Jeff Collins said. “And other places as well.”

And then, Collins said there was word that several schools were closingor were closed on Friday. He held a conference call with the NHIAA Executive Council, and the determination was made to halt things immediately.

“Monday we’ll re-evaluate things and see where we’re at,” Collins said. “But if schools are being shut down, it’s hard to say it’s OK for the athletes to compete. At least 20 schools closed (Friday),and there’s more to come.”

Bishop Guertin had closed on Friday, and Nashua announced all schools in the district would be closed next week. So it certainly doesn’t appear that these games, will resume anytime soon, if at all.

Would they resume the tournaments after, say, a two or three week hiatus?

“We’re going to consider all the options we have looking at it,” Collins said. “I don’t know what the turnaround would look like, especially if some schools were closed for, say, a month.

“At some point in time, we’d have to come to the realization that this (virus) has made such an impact that we would have to cancel (the tournaments) in the interest of safety for the student-athletes.

“We’d have to more or less clear the decks to have schools make decisions and not to have the tournaments hanging over their heads.”

Collins also said he, after some feedback from schools following Thursday’s late announcement of continuing the tounament, that limiting fan participation might not have been enough. “To have two teams compete, the athletes on the court would be in even closer contact,” he said, “and you’re not going to want to endanger the student athletes.”

With everything essentially shut down, most if not all local eams didn’t practice on Friday. Guertin coach Brad Kreick was first told by school officials early Friday that the games would go on with no fans whatsover; then he was informed quickly after that everything was suspended.

“I really feel bad for all the kids,” Kreick said. “They were looking forward to the opportunity to play and compete for the state title.

“It’s been a roller coaster for them. We went from starting practice at 3 on Thursday with the game postponed, then by the time we ended at 4:45 to it being back on for (Friday). So we’re all going to have to be patient over the weekend as everybody gets to reassess.

“We all have to stay patient, let the experts guide the decision-making process.”

Of course, the rumblings about the spring are starting to begin. Collins said that the NHIAA is starting to put together a proposal “moving forward for spring sports.” However there were rumblings Friday that a coupe of schools in the state had already, or were considering, cancelling their spring sports seasons outright.

With schools closed, the Nashua athletic department cancelled its spring preseason night for students and parents slated for next week. However, in a tweet, student-athletes were still urged to register for spring sports “as we are still anticipating starting practices/tryouts on Monday, March 23” as was originally scheduled.

But first, the local and state high school sports world waits, likely hoping against hope that the tournaments can be played sometime, somewhere.

“I feel bad for all the seniors if they don’t end up playing the games,” Alvirne coach Marty Edwards said. “We’ve never seen anything like this.”

“We were all disappointed,” she said. “We all have to stay optimistic and hope (the tournament) gets rescheduled when things settle down.”

Carney said the players would have been fine with playing in front of few or no fans, and are clinging to hope things don’t get completely cancelled.

“We hope that doesn’t happen,” she said. “We would have played that last game not knowing it was our last game. I guess it goes to the saying you have to play every game as if it’s your last.”