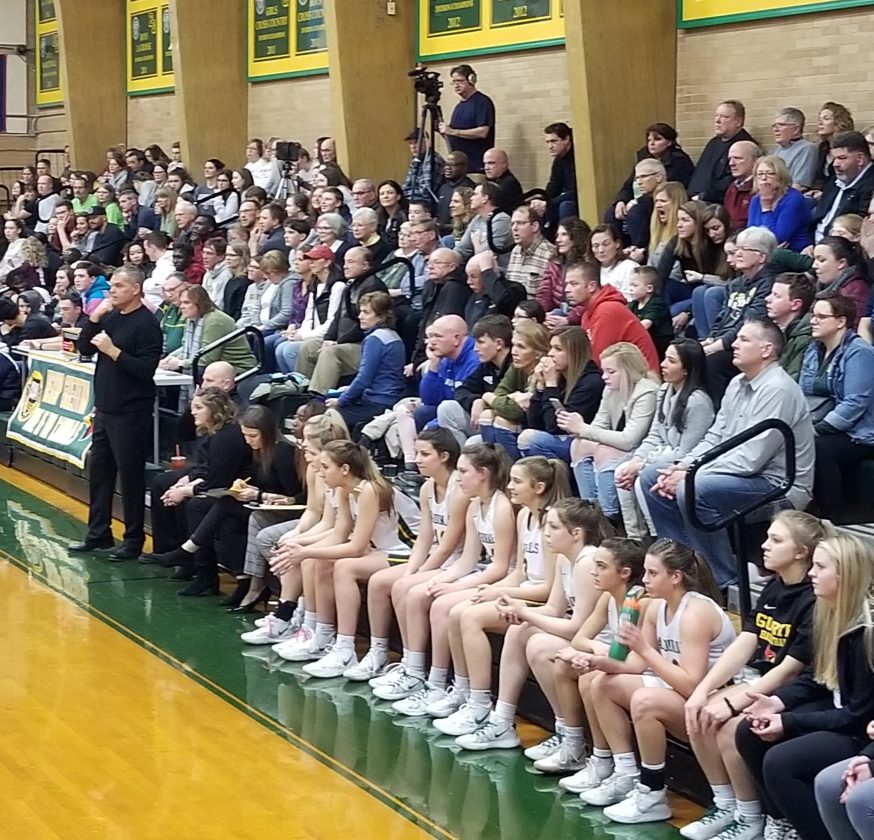 The Bishop Guertin High School girls basketball team was holding a practice Thursday afternoon rather than getting on a bus to head to Exeter for the New Hampshire Interscholastic Athletic Association’s Divison I semifinals.

And wondering if they ever would.

Evidently that answer is yes, per an announcement by the NHIAA that came about four hours yesterday after they had postponed all of Thursday’s postseason events due to the mayhem caused by COVID-19.

There were several conference calls Thursday involving NHIAA and school officials across the state, as well as health officials. And what was decided was to allow the tournaments in all sports to go on as scheduled or as rescheduled, with severely limited fan participation.

There’s been some talk, including in Nashua, that some schools hosting homecourt events may even further limit fan involvement. Family members of student-athletes should likely check with the participating schools.

“I’m a former athlete,and I know if (a tournament was cancelled) happened to me, I’d be devastated,” NHIAA Executive Director James Collins said late Thursday afternoon. “So we’re committed to doing whatever we can do to finish the student-athletes’ seasons.

“We’ll do whatever we can for all our kids to compete. I certainly want to honor that commitment. If that means playing in front of a limited audience – or no audience – it’s important for them to play out.

“This is completely unprecedented.”

Guertin coach Brad Kreick was hopeful earlier in the day on Thursday that this type of decision would be made.

“My hope is they’ll decide to play,” Kreick said. “I knew we were racing against time,and the biggest catalyst was the NBA (which was the first of the U.S. Major pro leagues to suspend its season).

“I think it’s surreal,” Alvirne boys hoop coach Marty Edwards, who held practice as usual last night. “You work hard, you want the kids to keep going, (the tournament) is an exciting event. But you never want to risk somebody’s health.”

Meanwhile, while at least for now the NHIAA has made a decsion on immediate tourney events – the boys semis and finals in Division I and II are next week, so stay tuned – the question also looms as to what do do about spring sports.

“I think we’ll have to look toward the spring and see what that brings,” Collins said. “We’ve had some preliminary conversations.”

Collins said some of the things bandied about are starting the spring season late, as some schools may be postponing the March 23 start of spring practices, and if they do play a limited spring season having open tournaments.

“I’m committed,” Collins said, “to getting those kids out there (for spring sports) as well.”

Hollis Brookline athletic director Rhon Rupp said he knows of three schools in the state that are considering closing for a couple of weeks. “It would be hard to say kids can’t come to school yet still have spring practices,” he said. “But I’m not worried that they’re going to be cancelled, just delayed.”

Collins said he knows things could change, because “developments keep happening every minute.”

“For me, it’s hard to say let’s keep having these games when all the higher levels (colleges, pros) get cancelled,” Rupp said. “You know, everything is so fluid. We just take it one day at a time.”

Today the Unified games that were postponed Thursday will also be played (Londonderry at Berlin, Dover at Exeter). The Division III boys title game between Gilford and Mascenic is also tonight at 7:30 p.m. at Keene State, and the Division II girls game between Spaulding and Lebanon will follow Saturday’s Division I title game.

Also, with limited fan participation, efforts are being made to have finals and other games live streamed on the NFHS network. For more information, go to https://www.nfhsnetwork.com/associations/nhiaa .