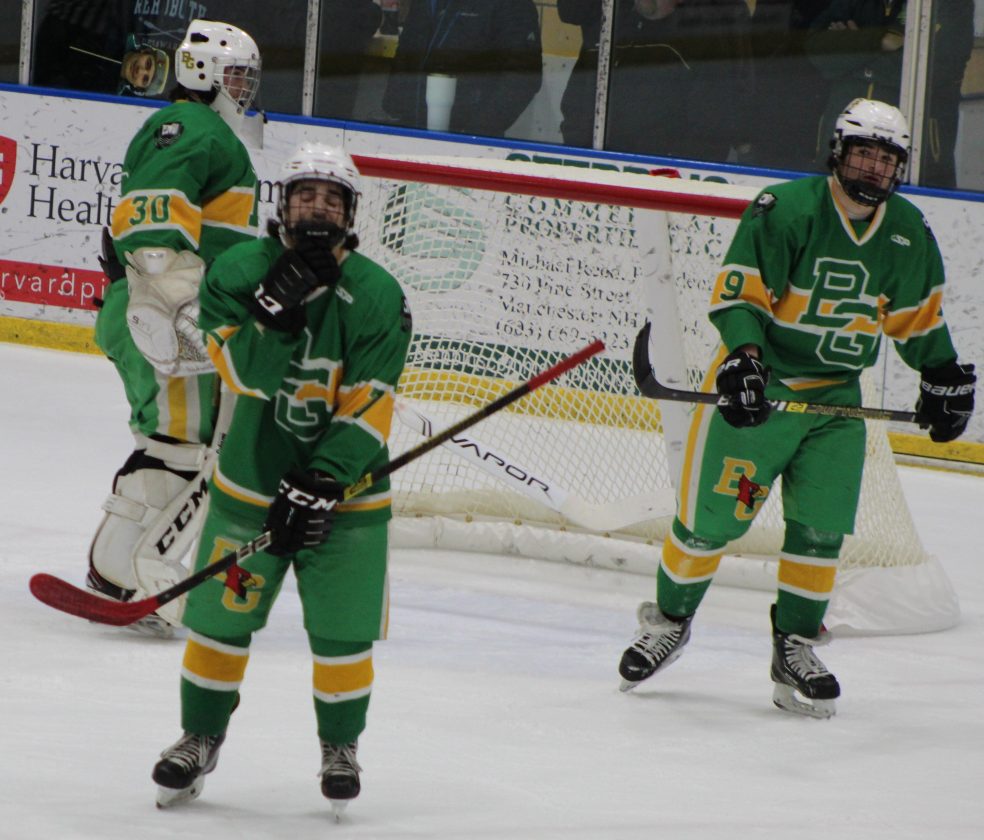 MANCHESTER — The Bishop Guertin High School hockey team had been there before – in more ways than one.

They were trailing Bedford, 3-2, early in the third period in Wednesday night’s Divison I semis at JFK Coliseum – the same way they were down to Exeter in last Saturday’s quarters.

Unfortunately for Guertin, the result wasn’t the same, as they eventually fell 5-2. And that, too, is familiar territory as it’s BG’s third semifinal loss in the last four years.

“We had a couple of chances in tight, but we couldn’t finish,” Guertin coach Gary Bishop said, his No. 6 Cards done after an otherwise good 14-7 season. “We only had four shots in the third period, and you’re not going to win a lot of games with only four shots in a period.

No, it was the Bulldogs who did, as they outshot BG 32-19 overall. Bedford broke a 2-2 tie early in the third period on the second of two Cam Wasylak goals, this one at 2:05, assisted by Brady Burke and Arhat Vaidya.

The Bulldogs made it 4-2 at 5:44 of the third when Quinlan Kerr fed Brett Niland in deep and he nudged the puck past Cards goalie Evan Butler (27 saves).

That proved to be too much for the Cards, who were without two of their top defensemen to overcome. Declan Wilkie sat out the game with a concussion and Guertin lost Mike Schaaf midway through the second with a leg injury.

“You know what, we scored early in the game,” Bedford coach Marty Myers said. “We felt really good, and we talked about that coming out into the third period. We wanted that feeling back. We wanted a quick one, and we did.”

“They got out of the zone real quick,” Bishop said. “They didn’t let (the puck) stay in their zone too long at all.”

However, the Bulldogs went into the first intermission up 2-1 on a goal by Wasylak at 9:36, assisted by Owen Roberto and Brady Burke.

Still,, the Cards got even again on a power play goal by Avery Abbott, assisted by Cronin, at 3:48 of the second. That sent things deadlocked 2-2 going into the third period.

“I think we ran out of gas,” Bishop said. “It is what it is. When you’re coming from behind, you want all the tricks in your bag.”

Things changed for the Bulldogs since they lost to BG 4-1 two months ago. They have only lost one game – to Concord – since.

“After they lost three games early, they rolled all the way through,” Bishop said of the Bulldogs. “At beginning of the year, they weren’t scoring, now they are. …

“We’re happy with the year we had. To play in a game like this,with two of your top defensemen sitting in the stands, it shows our depth.”

But they’d like to have taken that one last step.

In the first semifinal, top seed Concord (19-1) handled No. 4 Trinity, 6-1, starting with two goals just 20 seconds apart with just under five minutes in the first period.

Concord got two power play goals from Alex Forward in the second en route to a 5-1 lead and cruised. It’ll be the Tide’s first finals appearance since they lost to Bedford in 2017.