Tournament frenzy hits a new level rest of this week 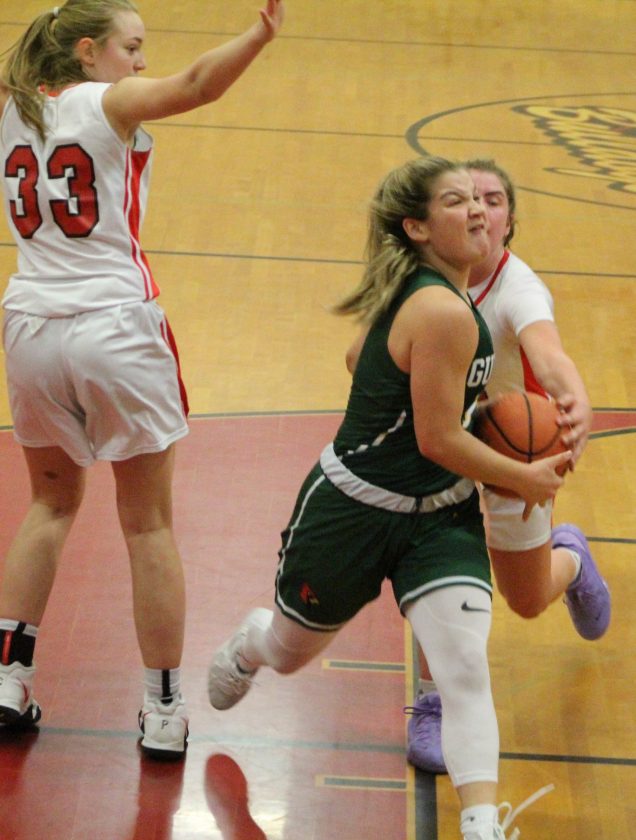 Telegraph photo by TOM KING Bishop Guertin's Hannah Muchemore goes to the hoop in a game vs. Bedford earlier this season. The Cards are hoping to have Muchemore back for Thursday's rematch with the Bulldogs in the Division I semis at Exeter.

Pick a game, any game. There are plenty to choose from tonight if local high school tournament tussles are your thing.

Here’s a look at all the fun:

The Cardinals and Bulldogs almost always clash at some point in the tournament in any sport; in boys hockey they met in the 2016 finals with Bedford coming out on top, and again in the 2017 semis with the Bulldogs winning 5-0. Guertin got back to the semis in 2018 but lost to Hanover.

This season, the teams played twice, interestingly enough, with each side taking turns controlling things. Guertin, sparked by the overall play of Pat Madden, beat Bedford 4-1 in early January but the Bulldogs dominated at Skate 3 just over a month later, 5-2, part of their current 11-game winning streak.

Two days after losing to the Cards, Bedford lost 4-0 to Concord on Jan. 10 and haven’t lost since.

“We won the first one, they won the second one,” Cards coach Gary Bishop said. “Anyone in that top eight ….”

Well now it’s down to the top four. Concord will square off vs. Trinity at 5:30 in the first game at JFK.

The Dogs got two goals from Conner LaBreque in their 5-2 win over Windham, but they have plenty of firepower. In their streak, they scored as few as three goals just three times. The Cards the last couple of seasons have spread the wealth in scoring. This season is no different.

“I’m thrilled with this team,” Bishop said. “It’s a great bunch of kids. I hate to repeat myself over the years, but it’s a bunch of guys named Joe again.”

Meanwhile, in Division II, Merrimack is back to where it was a year ago, presumably older and wiser than the inexperienced team that was beaten handily by Dover, whom this time they vanquished in the quarters.

The Tomahawks fell 3-1 to St. Thomas earlier in the season.

“St. Thomas is looking to defend their title from last year, so they will be a tough out,” Tomahawks coach Dan Belliveau said before the tournement started. And also before it began, he spoke of his team’s resolve.

“We are not going to take anything for granted,” he said last week, adding his team will be ready to work in any tourney game “come game time”.

In that loss back on Feb. 8, Kai Schimp scored Merrimack’s only goal while the Saints got two goals from Brendon Chrisom.

Merrimack will no doubt look to senior leader Zach Stimeling to provide more firepower. Everett’s a small rink, so the Tomahawks will battle for space to maneuver. Should be a good one.

Locally, we have the powers – North and Guertin; we have the gritty – South and Merrimack – and we have the mix, Alvirne. Broncos coach Marty Edwards says his team, paced by the likes of Jack DeWitt and Paul Manzi, after a 1-5 start was made as heck and didn’t want to take it any more.

The Broncos in the past have had tourney moments when they have come out of nowhere to make a push. If they can get past the Bulldogs, Portsmouth would be a tough quarterfinal. The Clippers can shoot the lights out, led by tough point guard Calvin Hewett and shooter Coleman Brewster. The Clips, who would be in a bracket with Nashua North, haven’t lost since Merrimack beat them 46-36 on Jan. 31, and may be the best shooting team in the tourney.

“They are clicking on all cylinders,” Edwards said.

And what of the Titans? This is a year they are looking to take a step forward with their talented junior nucleus of Curtis Harris, Brenden Choate, Nate Kane,etc., and their 14 wins are certainly nothing to sneeze at. If they can beat Concord tonight, the Titans this year can play a home quarter, and it can be vs. Merrimack if the Tomahawks beat Goffstown. That was a 37-32 regular season football game on a basketball court won partly by a Curtis Harris block in the final seconds. No one wants to play the Tomahawks if coach Tim Goodridge’s Jared Dyer/Adam Ellis/Pat Yudkin led team is playing at its defensive best.

The Titans meanwhile at times are dynamic; and in a couple of instances they can struggle (like they did vs. South and Portsmouth). But there’s no doubt they have the talent to make it to UNH for the semis and beyond.

“I’m proud of the way we played in the regular season,” North coach Steve Lane said. “We’re going to have to play with an attitude and something to prove if we want to advance.”

South has done that much of the season; they can get infrequently hot from the outside, but they can click when players like Ivan Nyantenji and Alex Hulfachor take it to the cylinder. “That’s a tough basketball team,” Edwards said, “especially if Nyantenji can get to the rim.”

Plus they’re road tested – their last five on the road. Of course, the Panthers have a tough one-two seacoast punch, first Winnacunnet tonight and then top seed, defending champion Exeter on Saturday. Note that game would be 3 p.m.

Now, let’s not forget about the other power – Guertin. No one expected this team, led by junior guard Dylan Santosuosso and seniors Sam Mullett and Kyle Baker, to win 14 games. They’ve tried to step it up on man-to-man defense, with assistant coach Chris Cameron, more known as the BG boys lacrosse coach, bringing a good approach.

“He really feels strongly about this defense,” Cards coach John Fisher said a couple of weeks ago. “He brings a lacrosse mindset. I really think we’re getting better and better at it.”

The Cards finished the season losing to Exeter and Portsmouth, but heck, doesn’t that happen to everyone? They could face Keene in the quarters.

Either way, the feeling is there’s no clear-cut favorite.

“Any team has a real chance to advance,” Lane said. “Exeter and Portsmouth are the favorites. Nothing to lose for all other local teams.”

The Pick: Portsmouth over Exeter.

Ah, the Bedford-Guertin girls hoop rivalry is alive and well again. Guertin won a regular season battle 65-46, a game in which the Bulldogs cut to the gap to single digits late in the third quarter before Guertin pulled away.

The junior guard Isabella King-led Bulldogs have lost just one game since Jan. 18 – a one point defeat at Merrimack – and can pose problems.

“(King) is a heckuva scorer, one of the elite scorers in New Hampshire,” Kreick said. “But they’ve got others who can score.”

The Cards are thinking they will have senior guard Hannah Muchemore back after missing the last two-plus weeks with a leg injury.

“She should be good to go,” Kreick said, adding she was back on the floor Monday for practice. “She definitely gives us a lot of energy.”

Kreick and the Cards are taking nothing for granted in the final steps toward a fifth straight title, as all one has to do is look at the other semi where underdogs Goffstown and Londonderry, No. 6 and 10 seeds, play in the 6 p.m. semi.

“After the developments (at Dartmouth) and having some conversations there, we made the decision,” NHIAA executive director Jeff Collins told the Valley News. “What they are looking at, at Dartmouth, due to the rapidly changing nature of COVID-19, and this very real possibility of more restrictive spectator policy at Dartmouth, we’ve decided to go to a larger venue where we can accommodate the larger crowd.”

No word on where Saturday’s title game will be played. And remember, the Division I girls, Division I and II boys are all scheduled for their finals (and semis in the boys case) at UNH. It remains to be seen if things stay that way, Collins hinted.

“We’re checking with all our college venues to see what restrictions they are putting in place,” Collins told the Valley News. “This COVID-19 situation is very fluid. We’re following the (Centers for Disease Control and Prevention) and (World Health Organization) guidelines for large crowds and public events. But if some of the colleges we work with make restrictions, we’ll certainly have to reassess.”