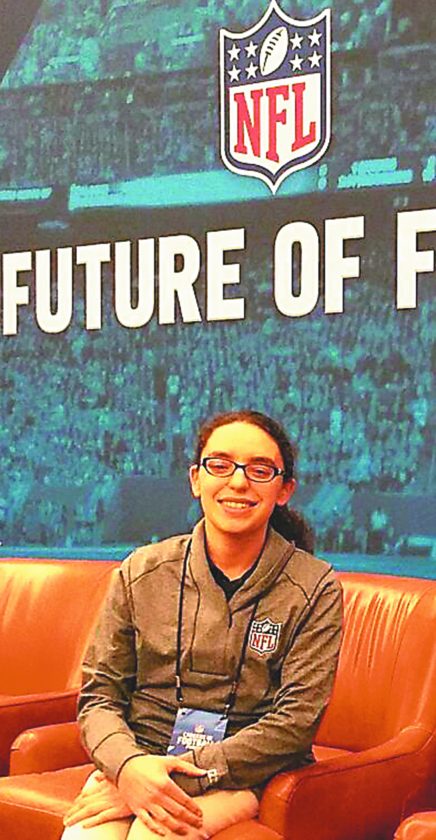 Nashua's Lauren Gaudette attended the NFL's Future of Football Seminar for women this week in Indianapolis.

If you know Lauren Gaudette and how fiercely loyal this coach is to her players, you would never believe her leaving them, even for just a day or two.

But this was the National Football League calling. Yes, THE NFL. And it was an opportunity, Gaudette, the Nashua South boys freshmen basketball coach had to take.

Gaudette, 31, attended the NFL’s Career in Football Forum in Indianapolis this past week. The event, which featured just 40 invites from around the country, ran in conjunction with the NFL Combine. So, along with networking, it allowed Gaudette to rub elbows with some of the hot stars in the game, both in management and ownership and in the coaching ranks.

“The trip was absolutely fantastic, absolutely empowering,” said Gaudette, back on the grind Friday night as she scouted Memorial and Central for South head coach Nate Mazerolle. “I was there with 39 other women with similar goals in mind, learning about all these different aspects of the sport.”

Current young up-and-comers in the NFL ranks met with the attendees. They swapped stories and discussed opening doors that had been previously closed to women.

A key assistant in the fall on coach Jimmy Lauzon’s Division I state champion Londonderry High football staff, focussed on the coaching aspect of the game. But the event also enlightened her to other aspects of the game, like meeting the lone black female scout in the game, San Francisco’s Salli Clavelle.

“Meeting all these ladies, they are the ones who are so important to up-and-coming ones like us,” said Gaudette.

“And that’s really what this forum was about.”

Gaudette reached out to the NFL and had to apply to be a part of the event.

While in Indianapolis, she truly got a taste of the pro game, discussing it with the likes of head coaches Mike Vrabel of Tennessee and Ron Rivera of Washington, along with San Francisco 49ers GM John Lynch.

An educator by day, Gaudette has always set her goal to coach full-time in the college ranks. This trip to Indy may have raised the bar on her aspirations.

“If I got an opportunity in the NFL, I’d take that and run with it,” she said. “I’ve always preferred the college game. As long as I’m coaching, I’d be happy, a fulltime job in coaching remains my goal in life.”