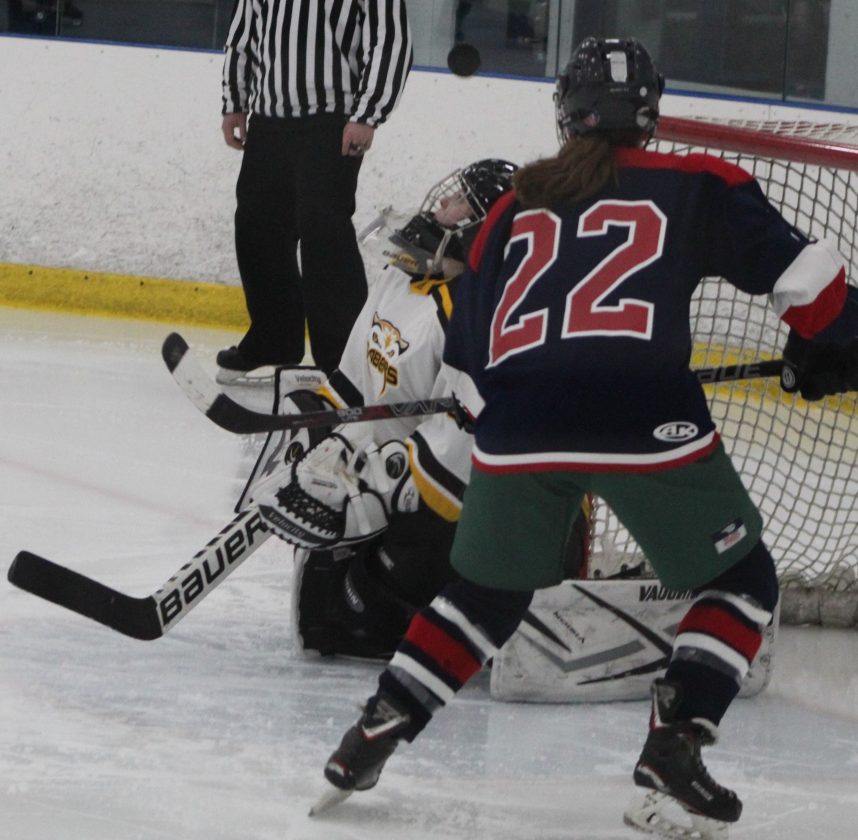 NASHUA – A high school hockey girls goalie can be the key thing, but she doesn’t have to be everything.

That’s the lesson the Souhegan Sabers learned Monday afternoon in a 7-1 loss at the hands of St. Thomas-Winnacunnet-Dover at Conway Arena. Souhegan was without ill starting goalie Elle Byram, and while inexperienced backup Mary Rothoff did what she could, she couldn’t stop Saints-Warriors forward Elizabeth Karatzas from scoring four times.

Souhegan managed just one goal, a Clare Woodford tally midway through running time in the third period, and didn’t possess the puck nearly enough to take the pressure off its substitute goalie.

“There’s really no excuse. (Byram) doesn’t score goals for us, so we still need to generate that offense.”

The Sabers starting goalie should be back for Wednesday’s game at Brady-Trinity-West, but clearly things have to change for this 5-9-1 team, nearly certain to grab the 11th and final playoff spot, before the postseason starts next Tuesday.

“Oh yeah,” Braley said. “I told the team the third period would be a gut-check for us, we needed to decide what team we wanted to be. The scoreboard didn’t matter, we’ve got to look ahead.

“We lost control of this one too early. So we need to set ourselves up and make sure we’re in a good mindset.”

Karatzas, who also had an assist, scored twice in the first period for a 2-0 visitors lead after the first 15 minutes. She had one of 9-8 STA-W-D’s three second period scores that made it 5-0, and scored just 40 seconds into the third to send things to running time.

Kylie Younglasu had a goal and three assists while Skyler Bednaraek and Kayle Smith also scored for the visitors from the seacoast.

Meanwhile, Braley gave kudos to Rothoff, known more as a softball catcher who had 22 saves on a 60-degree day that was better fit outside for that sport. Rothoff let in two inadvertent scores, but otherwise did what she could.

Braley knows what she and her team leaders need to do between now and next Tuesday.

“We need to make sure the room stays cohesive, and the room doesn’t divide,” she said. “Right now is not great timing for it. We need to believe and show up every game, and believe top to bottom. … We need to find our identity, show up with that identity so we can go as far as we can.”