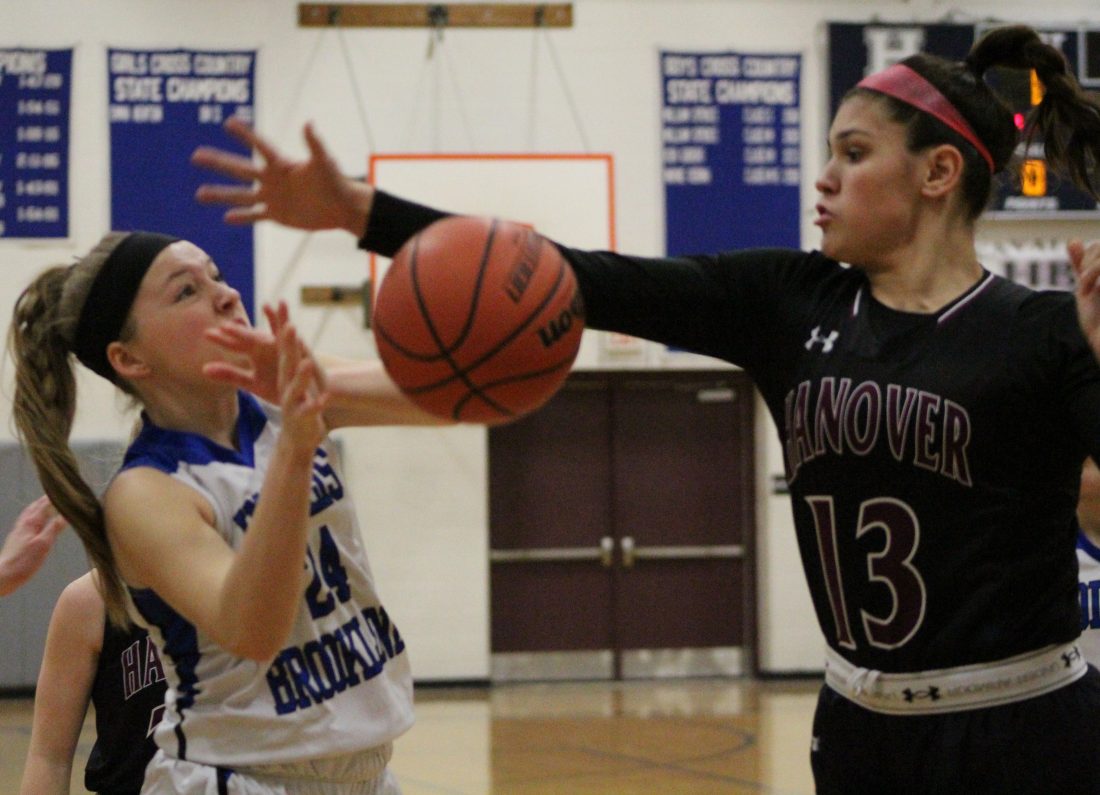 HOLLIS – It was almost a comeback for the ages.

Sure, the Hollis Brookline High School girls basketball team’s stunning fourth-quarter rally against unbeaten Hanover fell short, 62-60, but it certainly gave the Cavaliers a good feeling that perhaps the third time vs. the 16-0 Marauders could be the charm.

“It’d be great to be in the finals against these guys,” Cavs coach Bob Murphy said. “But I’m very happy with the way the kids improved their game from last week (a 67-43 loss at Hanover on Feb. 14).

“Going into the tournament, if we can stay out of foul trouble, keep some people fresh, I like our chances – a lot better than I did last week.”

He might have liked them even better had a potential game-winning 3-pointer from Christina Balsamo hadn’t hit the front of the rim with seven seconds left. It would have capped a comeback that saw the Cavs rally from a 17-point deficit as they trailed 45-28 after three.

The Cavs’ press had forced a turnover near their basket, and after a time out, Balsamo (nine points) threw up an immediate trey attempt off the inbounds with the score 62-60. No hesitation whatsoever.

“You know, when we’re down by two points, no time outs left, you have to get your first shot off,” Balsamo said. “With eight seconds left, if we pass, you don’t know if you’re going to get a shot, so you take the first one you’ve got.I couldn’t make anything, it wasn’t my night.”

But not completely, as Balsamo was proud of her team’s comeback.

“Especially since we just lost by 25 points to them less than two weeks ago,”she said. “We came back, which is hard against Hanover.”

Leading that comeback was the 15-2 Cavs sophomore guard Elisabeth Stapelfeld, who finished with 24 points, scoring from inside and out.

Amanda Goclowski added 12 for the Cavs, who had trouble with Hanover’s Madison McCorkle (team-high 20 points) and Stella Galanes (15). Six-footer Willet Parkins added 11 points for the winners, who were down 18-17 late in the first half before taking control with an 8-2 run to end the half to lead 25-20. They then dominated the third period, before the Cavs stormed back. Stapelfeld hit a trey to cut the gap to single digits, 57-48, with 2:26 left. A Balsamo 3-poiner with 24 seconds left kept the dream alive, 62-58.

“In the second half I thought we played much better until the last four or five minutes, when we thought the game was over,” Hanover coach Dan O’Rourke said. “That’s what it seemed like. You’re up what, 14, 16 points and things are going fine. Next thing you know missed shot, turnover, they hit a 3. … home, senior night, they gain a lot of momentum and they almost got us.”

“We had a shot at it,” Murphy said. “We did have a shot at it. Had that 3 gone in,it would’ve been a whole different situation I think. I just keep reminding myself that we played a heckuva lot better than we did up in Hanover.”

And they’d love another shot.