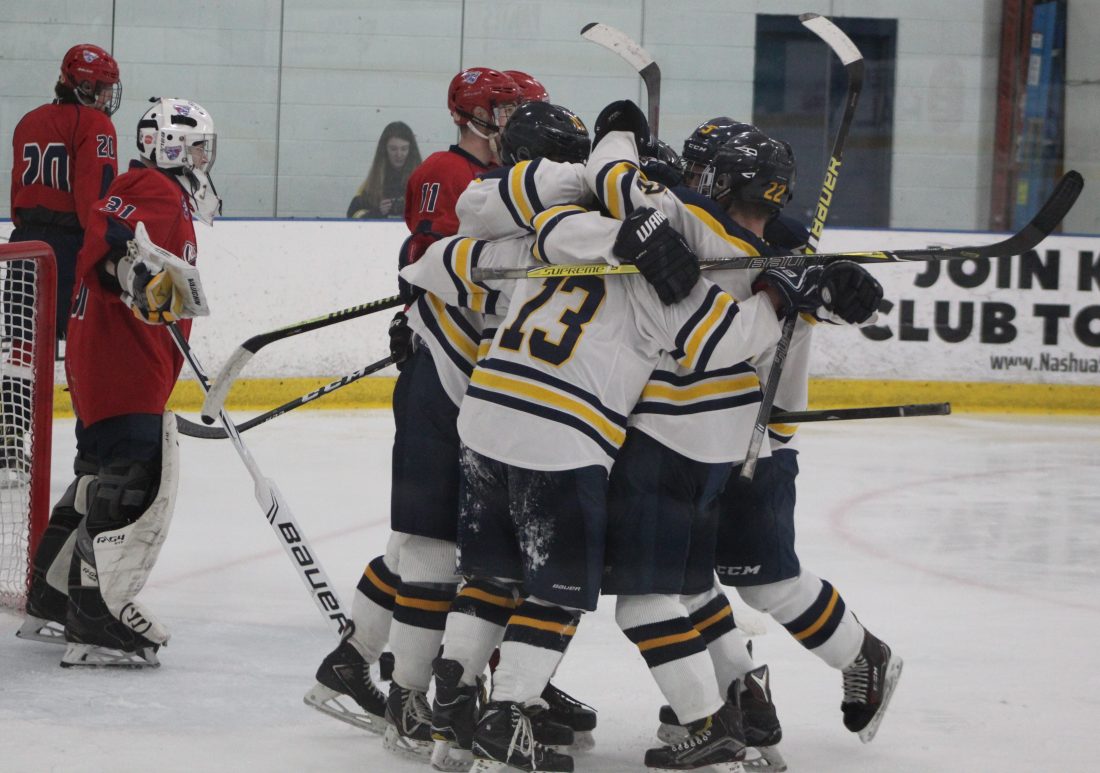 It’s a foreign word for the players on the Nashua High School North-Souhegan hockey team, because they’ve never made them in Division I since the co-op was formed five years ago.

But the Saber-Titans took a huge step toward making the state tourney with a 3-1 win Saturday over pesky Manchester Memorial at Conway Arena.

“It’s going to feel amazing,”said North-Souhegan senior co-captain Jack Belter, who scored a third period insurance goal, about possibly making the tourney. “It’s been four years of just rough times, and finally we can do it for the program. It’s a great feeling in the locker room.”

Here’s the deal: Londonderry (6-8-1 before Saturday), N-S (now 6-8-3), and Bow (6-9 before last night) are all fighting for the final two spots. Right now, the Saber-Titans, with one game left Wednesday night at Trinity, are in the 11th and final spot. Bow had a late, very winnable game last night vs. Manchester Central-West and has games vs. Windham and Concord remaining. Londonderry was slated to play Windham last night and has Pinkerton and Bishop Guertin left.

“It would mean the world to the program,” Saber-Titans coach Matt Osgood said about making the tourney. “The kids don’t know what the playoffs are; they really didn’t know what they were playing for today. Hopefully this improves our chances.”

It didn’t look good early on when Griffin Masseur took a game-misconduct with a hit into the boards on Memorial’s Brandon Burroughs, shelving Masseur for the rest of the period. The Crusaders later took advantage on an unrelated power play as Kenny McIntyre beat Colin Duckless, assisted by Brandon Murphy, at 10:45 for a 1-0 lead.

But N-S came through with two second period goals, the first iironically by Masseur, assisted by Ryan Dancoes at 3:49. The game-winner was a shot by Jake Lopes that somehow eluded Memorial goalie Maon Langevin (32 stops) just about two minutes later at 5:43. Ethan Gaffney had the assist.

And Belter scored that key insurance goal on a rush at 6:57 of the third, Richie Morel with the assist. All the N-S goals were by seniors.

“We shot ourselves in the foot,” Crusader coach Mark Putney said, his team constantly in the box in the third period. “We just became very undisciplined.”

“We had a rough first period, I think we thought we were a much better team,” Osgood said. “But we showed some heart, came back, and ended up taking the game.”

And now they wait and hope after grasping the power of the p-word.

“It was a little nerve-wracking, playoffs on the line,” Belter said. “But we knew what we had to do.”