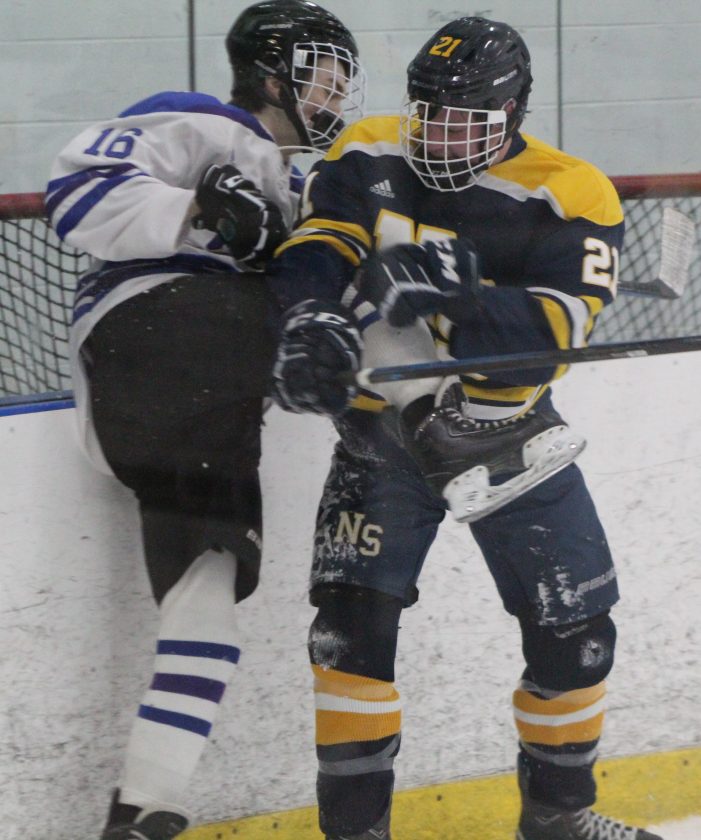 NASHUA – Should the Nashua High School North-Souhegan hockey team miss the Division I tournament, it will know who to blame.

Should the rival South-Pelham Kings somehow survive their poor odds and make it, they’ll also know who to credit.

The senior’s 53 saves – coming off a 57 save effort 48 hours earlier – were the main reason Wednesday night’s rematch of the rivals ended in a 1-1 overtime tie at a loud, packed Conway Arena.

“I’ve had a couple of injuries, but I just played through them, keeping my head up,” said Serrentino, who foiled the Saber-Titans at every turn except one early in the game. “This series is always really fun. It’s so fun. It’s one of the best thing about high school hockey, there’s nothing that beats North-South games.”

Saber-Titans goalie Colin Duckless wasn’t under the constant attack that Serrentino was, but he saved his best of a 24-save effort for last, robbing the Kings’ Chris Skelley with five seconds left in the OT.

Amazing, but what now? The Kings are 5-11-1, on the outside looking in with North Souhegan at 5-8-3, just ahead of Londonderry. One of the three will be the 11th and final tourney team, it seems, with just a couple of games left.

The Kings’ desperation was one of the reasons coach Shawn Connors pulled Serrentino with a faceoff in the Saber-Titans end with just five seconds left in overtime to get the extra skater. The Sabers fired the puck down the ice but wide as the buzzer sounded.

“We needed the win,” Connors said. “In that timeout, I asked the kids if they wanted me to pull the goalie because without the win, there’s a strong possibility we won’t get in.”

The Saber-Titans could possibly clinch with a win Saturday at Conway Arena over Manchester Memorial. The Kings have one game left, vs. Exeter here next Wednesday afternoon.

The Saber-Titans grabbed a 1-0 lead at 3:21 of the first period when Josh Constant tipped Peter Lennox’s wrister quickly into the net before Serrentino could reach. Cam Gagne, who won the faceoff, also got an assist.

But the Kings evened things at 3:02 of the second, when the Kings’ Cody Morton rifled one over Duckless’ shoulder, unassisted, to make it 1-1. And that’s how it stood.

“We gained, two points, but we needed four,” Osgood said. “We didn’t forecheck well. Our defense did good, kept everything to the outside. But running two lines, you get tired after a while.”

No one was likely more frustrated on the night than Sabers forward Jack Belter, who had a point-blank chance with 1:39 left in regulation – one of many – and was robbed by Serrentino.

“He’s an amazing goalie, the kid just stands on his head,” Connors said. “But more than that, though, he’s the typical kid every coach would like to coach.

And Serrentino between the pipes one more time.