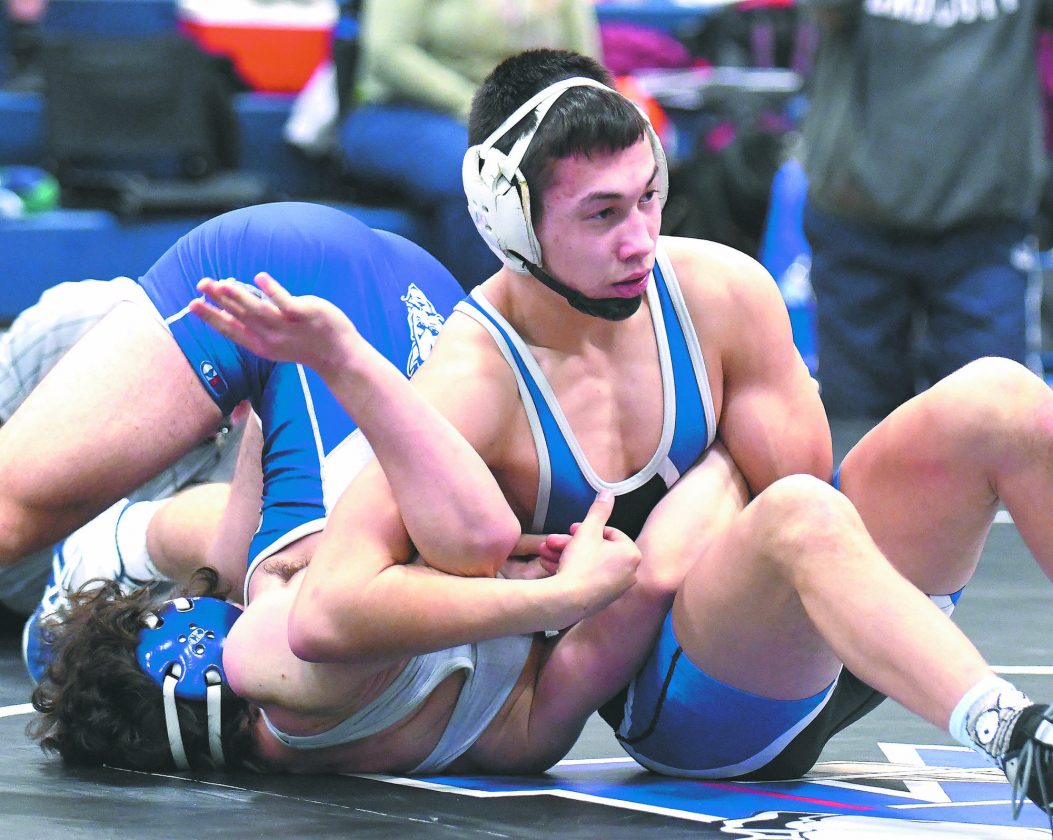 Photo by Jodie Andruskevich
Merrimack's Anson Dewar has his Salem High School opponent all tied up during the Merrimack High School Hall of Fame Tournament on Saturday.

Two years ago, it was Windham High School that denied Bishop Guertin. Last year, Hollis Brookline slammed the door on the Cardinals.

To say that those two days have helped shape the attitude of the 2020 Guertin wrestlers as states approach again on Saturday would be right on target.

“(A State Championship) is the goal,” junior Zach Rioux, one of six top-seeded Cardinals set to hit the mats in Goffstown on Saturday, said. “We’ve never won it. Its what we’ve been gunning for the past three years, and many years before me. I think we have a good shot.”

Guertin is again the team to beat this time around.

“Are we favored, everyone says we are, but they also said that we were favored the past two seasons and we found a way to beat ourselves,” said BG coach Paul Rousseau. “If we wrestle to our potential, yes, we should be at the top on Saturday.”

“All t hese kids have worked very hard all season. We fought through a couple of tough injuries and the team is still in tact,” said Rousseau. If we were to win on Saturday, it would show the kids that all the hard work and sacrifices they made all season were worth it. For the upperclassmen, it would be an unbelievable achievement especially after losing the past two years.”

The defending champs from Hollis Brookline have spent all winter trying to recoup from some serious losses to graduation.

The Cavaliers do have a pair of top-seeded matmen going for titles on Saturday in 120-pounder Troy Moscatelli and 182-pounder Henry Burns.

Merrimack was second to Windham (now in D-I) in 2018 and always seems to be right at the top of the points board deep into Saturday afternoon in this event annually.

Defending champ and 100-win man Anson Dewar is the Tomahawks’ top gun, going at 152. Both he and 220-pounder Griffin Ostrom have drawn top seeds in tough weight classes, while teammate Evan Torres drew the top nod among the three competitors at 113 pounds.

Ten Milford High Spartans will be hitting the mat, including 126-pounder Deacon Currier, who was a runner-up in this event a year ago.

Greg Gagnon (160) and Brien Faucher (182) were third place winners last winter. Rudy Schnare at 132 and 220-pounder Rory O’Connor were fourth-place finishers a year ago, looking to improve, while Dan DeBernardo (285) took fifth in 2019.

Freshman Matt Ebert at 138 heads up a cast of Spartans looking to make their mark this time around, along with Ethan O’Connor (145), Mason Dorsey (170) and Ben Kilgore (195).

Aidan Wilson (170) and top seed Victor Ceballos (138) head up a small but dangerous bunch from Souhegan.

The Division I State Meet runs all day Saturday at Londonderry High School.

This event, dubbed by many as the Timberlane Invitational, has been done so for good reason, considering the Owls have won four straight and 19 of the last 20.

The region does boast a pair of top seeds with Alvirne 170-pounder Kyle Gora and Nashua South 113-pound man Colby Spencer at the top of their heaps.

Six other Panthers join Spencer as projecting toward the podium. Nate Zalzal (220) and Kyle O’Connor (285) earned second seedings, while at 120, Kyle Salemi is a No. 3 seed.

It looks like Nashua North, if seedings hold, could have Titans all over the consolation rounds.

Campbell High is the lone area participant Saturday at the Division III State Meet, which will be hosted by Pelham High School.