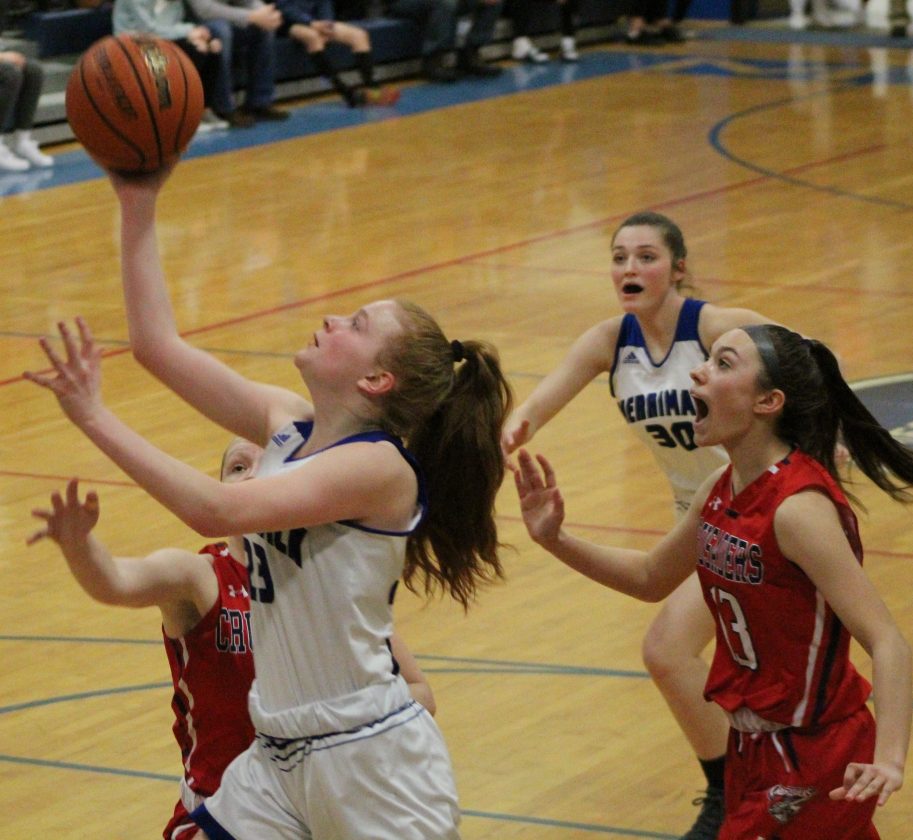 Telegraph photo by TOM KING Merrimack's Riley Crampton drives to the hoop, much to the chagrin of Memorial's Paige Thibault during the Crusaders' 42-40 win Tuesday night at the H.Dana Taylor Gym.

So the 42-40 outcome, in the favor of the Crusaders Tuesday night at the H. Dana Taylor Gym, was no real surprise.

Indeed it was. The Tomahawks, now 14-2, couldn’t get the big shot down the stretch when they needed it. Memorial’s Lyric Grumblatt hit one, however, to give her team the lead for good with 2:03 left. After that the Crusaders went 6 for 6 from the line to give themselves the win in a game during which defense ruled.

“We’ve been a team that has been known to go on big runs on offense,” Memorial coach Greg Cotreau said. “But lately due to injuries, whatever it is, we haven’t been able to do that. That’s one of the things we talked about in the locker room, we needed to go on a big run, and it has to start on the defensive end.”

The significance of this game? Memorial is now 14-1, now in the No. 2 spot in Division I, which would mean a first-round bye. The Crusaders also now hold a head-to-head tiebreaker over the Tomahawks and Bedford.

It was an offensive struggle for Merrimack, which led 13-8 after one and 22-19 at the half. But the ‘Hawks went scoreless for the first 4:55 of the third quarter, preventing them from pulling away, even though they recovered to lead 28-26 after three.

But the Crusaders held Merrimack’s top scoring threat, Theresa Twardosky, to nine points – but more importantly, just one point in the second half. Riley Crampton and Samantha Page tried to pick up the slack with 14 and 12 points, respectively, but it wasn’t quite enough.

“I’ve got two real good bulldog guards in Tamrah Gould and Jess Carrier,” Cotreau said. “They’ve played against Theresa for years in AAU, played her for three years here matching up. They just know she can shoot, and when she tries to get to the rim, that’s really not her strong game. We get up on her, and force other kids to beat us.”

“We rebounded well, that was a concern,” Soucy said. “We did a good job on Lyric (Grumblatt) I thought overall, she got a couple of good looks and knocked them down, she’s a great player.”

But the real key was the Crusaders’ 14 of 17 shooting from the line. Merrimack got to within 40-39 on a Crampton layup with 14 seconds left, but Ryan Moran hit two free throws to get the lead back up to three. Merrimack was fouled before it had a chance for a game-tying trey;Makenna Desfosses made one of two with 3.6 seconds left. Just not enough.

“That was an awesome high school basketball game,” Soucy said. “Two very good teams, duking it out, and one had one possession better than us. That’s the way it worked.”

Perhaps we’ll see how it might work in the semifinals next month? Stay tuned.