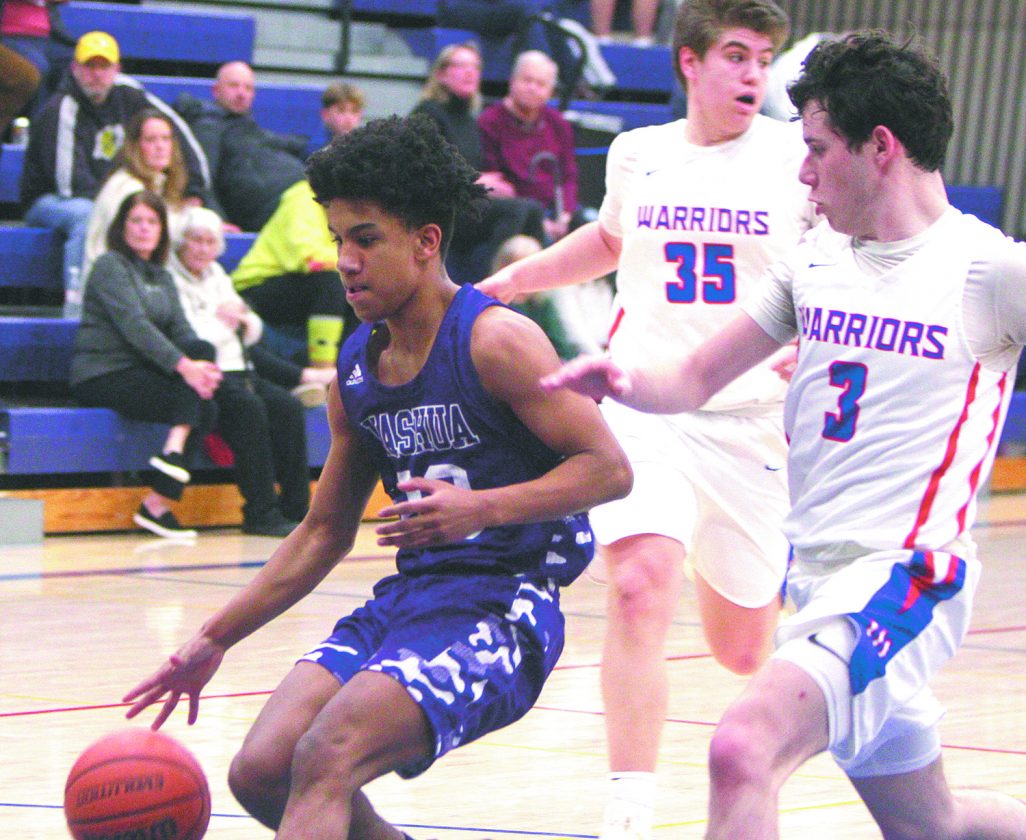 Telegraph photo by HECTOR LONGONashua South's Jeremiah Mitchell looks to head to the basket against Winnacunnet on Tuesday night. The Panthers had their six-game win streak snapped in overtime by the host Warriors.

HAMPTON – Nate Mazerolle searched for a lesson to derive from Tuesday night’s loss at Winnacunnet. Like his players did on the hardwood in almost painful fashion, he walked away empty following a 53-52 overtime loss that ended Nashua South’s six-game win streak.

“I don’t have (a lesson) right now,” said Mazerolle after watching the host Warriors hang around long enough to seize the win and move to 9-4.

“We didn’t earn it at all. We talk about five things that we’ve been working at all season long that we need to get better at. The last one I always say is free throws and layups. We win by 10 if we do our job there.

“We missed several down the stretch. They made theirs … ballgame.”

That’s when the Panthers simply buckled.

“Turnovers, we threw the ball all over the place. We weren’t even getting shots up. Do that and you will lose every time,” said Mazerolle.

Still, South held the lead until the final seconds of regulation.

Each team went to the line at that point. South missed a front end, and Warrior Brett Marelli (game-high 26 points) made one of two to knot things at 45-45.

South had two clean looks but couldn’t knock a jumper down, sending things to OT.

South’s Ivan Nyantenji (19 points) matched Marelli with the five points apiece to open the overtime, before South finally paid for not slamming the door.

Colby Tempro made 1 of 2 from the line with just under 40 seconds left, and South got the stop it needed.

But Nyantenji would make just 1 of 2 from the line with 19.3 left, and Winnacunnet’s James O’Hara decided he had seen enough.

The junior went the distance of the floor and nailed a three-point play on a nifty banker for the Warriors’ first lead since the third quarter.

South had 10 seconds to make something happen, but a long 3-point try caromed off the front rim, sealing the Panthers’ fate.

“It’s always a tough place to play,” said Mazerolle. “We stole one here two years ago, maybe this is basketball karma.”

Now 9-5, South moves on to a huge one at Bishop Guertin on Friday night.