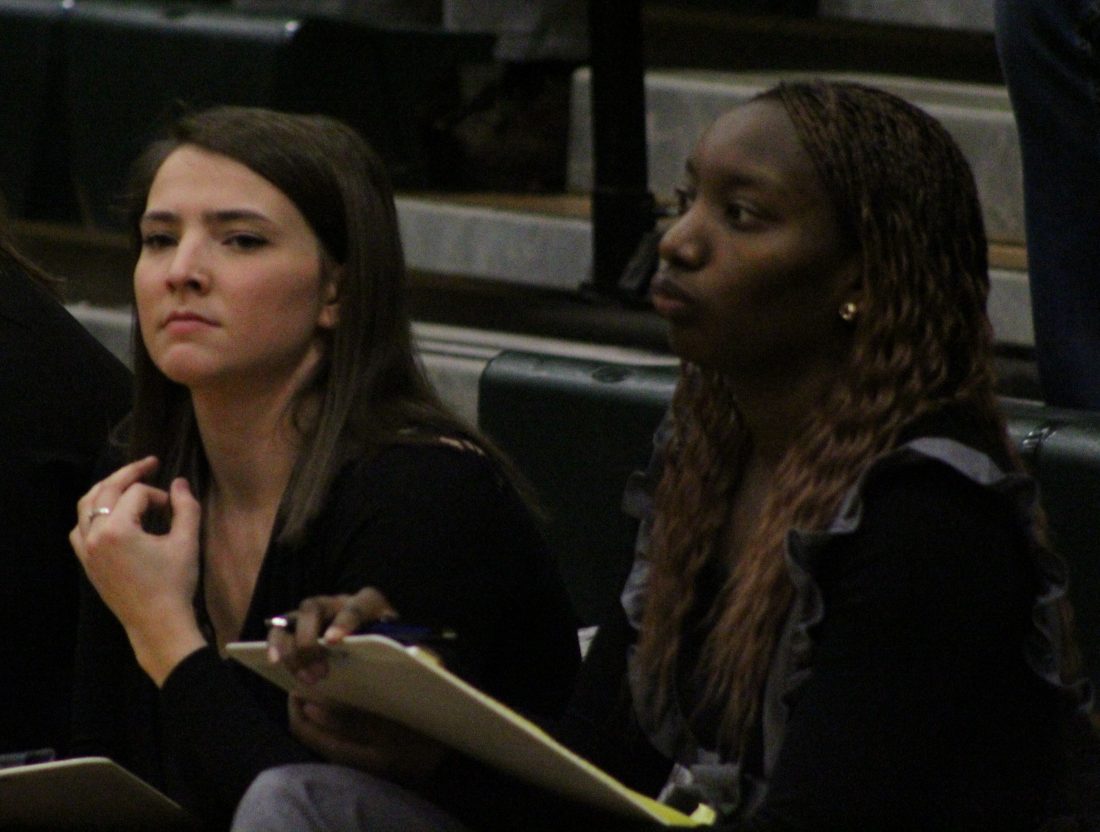 NASHUA – When they were high school athletes at Nashua North and Alvirne, respectively, Taylor Choate and Sandi Purcell couldn’t stand Bishop Guertin and loved the chance to beat the Cardinals on the basketball floor.

“It was funny, one of the first games Taylor and I were on the bench, one of the players was getting upset,” Purcell said. “I said, ‘Listen, you’re at Guertin, everybody in New Hampshire hates you. We were in their position, we hated you.”

In a way, Choate, who just played in two straight Division III national title games at Bowdoin, and Purcell, who had a fine career at Keene State, still oppose BG players as they face them on practice on scout team duty.

But in any event, they’re Cardinals now, at least for this year. Choate, in her first year out of college, is a varsity assistant but helps at all levels of the Guertin program, while Purcell is the head JV coach and also assists the varsity.

“They’ve both been fantastic coaches,” Guertin head man Brad Kreick said. “And you couldn’t have any better scout team players. And you couldn’t find two better role models for our kids, especially the ones who aspire to play at the college level.”

Choate has been a longtime family friend of the Kreicks, and discovered that she missed basketball by the time the summer ended and September-October arrived.

“I reached to him and said I’d love to volunteer my time and help out with the girls,” Choate said.

So she went to Guertin’s last fall league game and her coaching career was underway. Choate has played in two straight NCAA Division III title games for Bowdoin, and that experience is certainly something she can relate to the Cards.

“We’ve all been there, Sandi’s been there,” Choate said of high pressure games. “To be able to play in those pressure games, come back and teach the girls when you’ve been in that position before, you’re able to pass along some of the knowledge you’ve learned along the way. How you’ve stayed poised, been able to get better even as a college player. … The little things, what you work on, keep pushing them, things like that.”

Choate’s work schedule isn’t 9 to 5 – she’s planning on medical school — so she’s with the Cardinals when available. Sometimes she’ll run the freshman practice, sometimes she’ll help out during the games on the bench, but maybe the most fun is working on the scout team – as a player.

Purcell,meanwhile, works with autistic kids (placement, etc.) and never had the months away from the game that Choate did.

“Ever since I started playing, I knew this (coaching) is where I wanted to be,” said Purcell, who helped out her father, Scott, coach an AAU team when she was playing at Keene State.

Purcell knew Kreick when she was playing with some other local collegians against the Guertin girls during summer league open gyms. When she graduated in May, Kreick texted her to see if she’d be interested in coaching the Cardinal Jvs.

“A great kid, a tenacious kid,” Kreick said. “We had a pretty good sense she was going to come back here, teach here (in the area), and make her life here. So I said to her if you ever want to stay involved in coaching, stay in the game, call me.

“She’s been a fantastic addition, a real key part of the staff. She’s in her early

20s, and the girls can relate to her in a way they can’t with old guys like (assistant Kyle) Tave and even I. She’s great, she’s going to be a great coach.”

Purcell had to make the adjustment to coaching at the JV level, where winning isn’t the main focus; development is.

“It’s really tough, I’m competitive, I want to play a varsity game and play to win,” Purcell said. “But I always say to my team, as long as we’re doing the little things, like we work hard, the scoreboard doesn’t really matter at the end of the day. Teaching them the competitive nature and basics of the game still makes it fun.”

“She’s doing a great job developing the kids at the JV level, and she’s integrally involved with what we’re doing at the varsity level,” Kreick said. “Sometimes I don’t like to talk about her too much bcause she’s a hidden gem for us. I’m worried someone would come and get her. … She’s going to be a very, very good (head) coach.”

Choate’s familiarity with Kreick certainly made this an easy move.

“Our families have been very close all the way back to the CYO days,” Kreick said. “I said if you want to stay involved in the game, come when your work schedule allows and help out with the kids.”

Choate’s coaching career may get sidetracked once she goes to medical school as planned. “If she wanted to make a career change and become a coach (full time), she’d be a good one,” Kreick said.

Now that Purcell has been doing it, she wants to make coaching a career.

Choate admits she still misses playing, but coaching helps her get her basketball fix.

“It’s fun to see girls that were in your position before, and be able to pass on the wisdom you learned along the way,” she said. “Get to see them succeed, and do so well.”

Choate knew that Bowdoin had a great program when she went there, but could have never envisioned the success she experienced. “You never go in expecting that you can be part of such an amazing program,” she said. “It was an incredible experience.”

Perhaps come March this may end up being one, too.

The results of the NHIAA Gymnastics State Meet have finally been posted, and the winner is Pinkerton Academy with a total score of 136.925, ahead of second place Pelham (133.250) and third place Londonderry (126.150).

Pelham’s Abigail Druding was the state champion All-Around at 36.350.

To get her top 10 All-Around spot, Koczalka was eighth on bars, tied for 11th on beam and floor, and 12th on vault. BG’s Bolger was seventh on vault.

The NHIAA bowling team championships will be held this Saturday at Strikers East in Raymond.

If you look at the standings, our own Hollis Brookline will go in as the top seed, currently sitting in first place with 101 totals points. Merrimack is ranked third at 90.0, despite a virtual tie with second place Goffstown; Bishop Guertin is ninth while Souhegan is 12th.

Hollis Brookline is paced by Ben Lafontaine with a game average of 205.67 and Nic Vahe (perfect game earlier in the year) at 204.63.

Merrimack, meanwhile, has the dynamic Mike Grover at 213.94.

A week after a huge comeback win over Bedford, the Merrimack High School girls basketball team has another big game. The 14-1 Tomahawks host 13-1 Manchester Memorial tonight at 6:30 in a game that not only highlights the local slate but will more than likely be for the second seed behind Bishop Guertin. It should be a fabulous game at the H. Dana Taylor Gym.