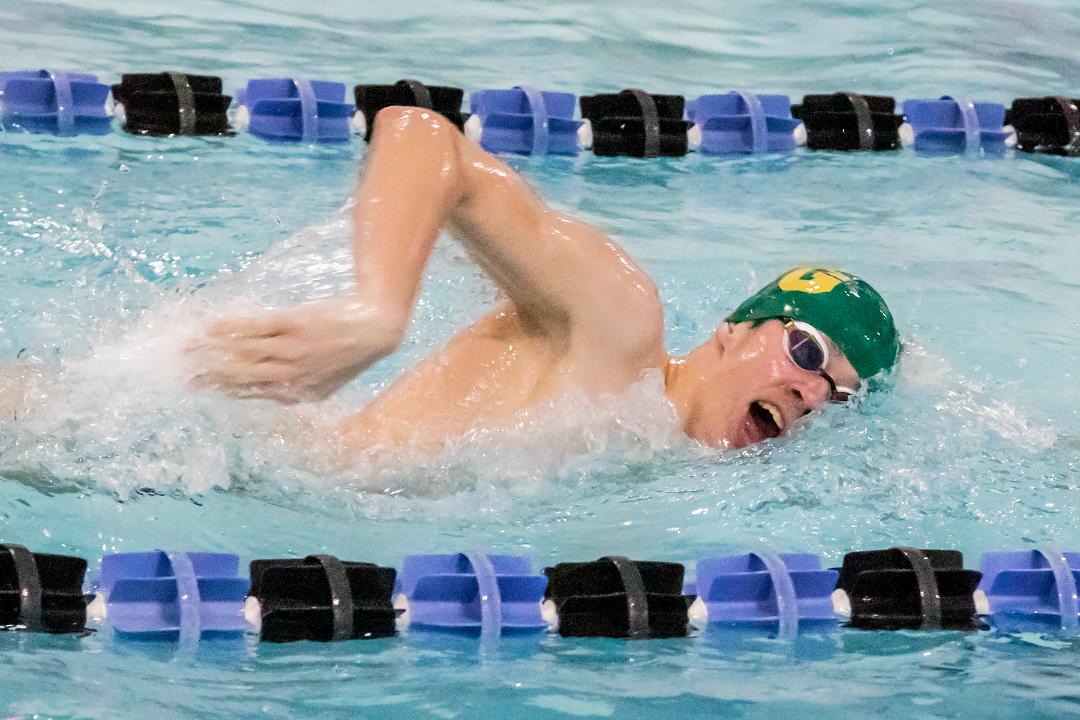 Photo courtesy of Bishop Guertin/Bro. Ralph Lebel Matt Crane is one of the keys Saturday for Bishop Guertin as the Cards try for a Divison I title threepeat.

Is the Bishop Guertin High school boys swim team looking at a threepeat in this weekend’s NHIAA Division I swimming and diving championships?

It doesn’t appear as cut and dried as it did a year ago. There are a few other teams with a chance, including locals Nashua North and Alvirne, plus Exeter has a good shot.

The diving competition in Divisions I and II will be today at 5:30 p.m.,, followed by the Division I boys and girls meet Saturday at 8:45 a.m.and Division II at 4:45 p.m., all at University of New Hampshire. Here’s a look:

The relays could be a key, with major points for the winners. Otherwise, Guertin will be looking to Matt Crane in the 50 free and 100 free while junior Jack Januario will be a factor in the 200 and 500 free.

“They have stiff competiton in these events but are capable of winning two events each with great swims,” Cards coach Christine Rousseau said, adding that other Cardinal keys will be senior Connor Donoghue in the 200 IM and Ivan Dodor in the 100 breastsroke.

“I believe my swimmers have put in the work this season to do so,” he said, noting that the Titans’ seven qualifiers are two more than a year ago and the most Massey has had during his coaching tenure. Here are a couple of North keys: senior Mario Rodrigues, who was a top five finisher a year ago in botht he 200 free and 100 back, and freshman Rittivuth Chea, who has been ranked in the top five in the 200 IM and 100 back all all season. He and fellow North freshman Owen White should help North finish strong in relays 200 medley, 200 free, 400 free.

Watch out for Alvirne in the Division I boys. “We’re hoping for a top four finish overall,” Broncos coach Brendan McLaughlin, noting that his team is ranked in the top 6 going into all three relays. “The bar is set high and we’re determined to make a statement.”

Alvirne will be paced by Murray Reynold, seeded fourth in the 100 free,

Nashua South will be looking for Jason Lam in the 200 IM and 100 breastroke for points. Also, the Panthers 200 free relay team of Caden Hedquist, Sarthak Mandavia, Lee Hill and Jason Lam will be shooting for a top 10 finish.

Individually, Merrimack’s Tobin Stevens is seeded in a couple of events, including fourth in the 50 free.

Right now,it looks like Exeter will dominate this meet but Nashua South, Bedford, Londonderry, Pinkerton and Bishop Guertin could be involved in a tight battle for second through five.

Alvirne could bring home a state champion as soon as tonight in the girls diving as last year’s runnerup, Brittany Whiting, is one of the favorites.

“She’ll have to work hard and earn it,” McLaughlin said, noting that if that happens, it will be the ninth straight year Alvirne will have had a champion in an individual event.

She’ll have to beat out the top seed, Nashua South’s Sue Mai White.

The Panthers could make more than just a little noise as besides diving, the medly team of Haleigh Swaowicz, Caroline Chea, Payson Mooso and Katrino Norton is seeded third going into Saturday. Swabowicz and Katrina Norton are vying for top 10 finishes in the 50 free style.

According to Rousseau, BG’s best shots at individual champions are Olivia Shusta in the 200/50 free and Mia Januario in the 200 IM/500 free.

Merrimack’s Muriel Lubelczyk is the fourth seed in the 50 free and third seed in the 100 back to lead a small Tomahawk contingent.

Oyster River and Hanover look like they’ll be battling it out for the title, but some locals could have a good day.

For example, Souhegan freshman Amanda Ulicny is seeded second in the 200 and 500 free;Hollis Brookline’s Eleanor Cunanan is ranked fourth in the 50 free and 100 back; Campbell’s Katelyn Rakiey eighth in the 100 butterfly; Milford’s Lillian Chappell is a seeded 10th in the 100 free,while Wilton-Lyndeborough’s Ava Rondeau is ranked ninth in the 100 back to highlight the locals.

Windham, St. Thomas and Oyster River look strong for this title, but there are a couple of local individuals to look at. Souhegan’s Miles Lim is the top seed in the 200 free, just ahead of Milford’s Andrew Bartolomucci, who is tops in the 100 butterfly going in. Lim is another numero uno seed in the 500 free.

Milford is also seeded third in the 200 Medley relay, and fourth in the 200 free relay, just ahead of Souhegan in the latter.

Also on Saturday is the state gymnastics meet, with sessions at 10 a.m.and 1 p.m. at Pinkerton Academy.

Pinkerton goes in as the top seed, while locally Bishop Guertin is seeded fourth, with Nashua South seventh. Those teams will compete in the afternoon session.