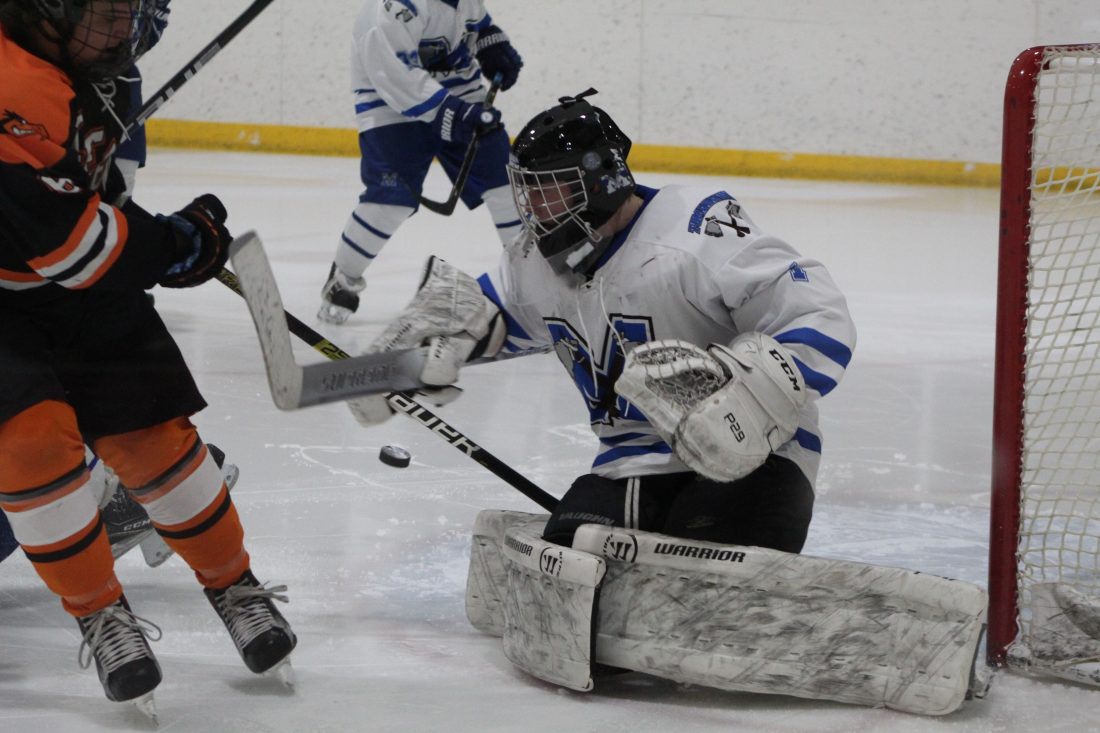 MANCHESTER – They know each other well – maybe too well.

That familiarity helped cause neither the Merrimack or Keene High School hockey teams to leave West Side Arena with a win, as they settled for a thrilling 3-3 overtime tie Wednesday in a battle of Division II title contenders.

“We know Keene because we’ve played them so much,” Merrimack coach Dan Belliveau said, his team now 8-3-1. “We’ve played them three, four times in a season because of holiday tournaments and stuff. So we know them pretty well and we have a pretty good idea of what’s coming at us.”

What was coming at the Tomahawks was Keene forward Jerred Tattersal, whose two goals brought the Blackbirds (7-2-2) back from a 3-1 deficit. Tattersal grabbed a loose puck and beat Merrimack’s Ben Hardy with just 37 seconds left in the second period, and his power play goal at 6:29 of the third ended up forcing overtime. He now has 23 goals on the season.

“You know how it goes with momentum swings,” Belliveau said. “A kid gets an opportunity like that on their side and makes good on it, that’s a momentum swing.

“We had a defensive lapse maybe here and there, but I have to be honest with you, I thought we played pretty well defensively and our goaltender (Hardy, 28 saves) was phenomenal,” Belliveau said. “It enabled us to still have the opportunity for the win.”

Keene actually grabbed a 1-0 lead on a goal by Zach Mooers a 7:25 of the first, but the Tomahawks came back with three straight. ‘Hawks’ top scorer Zach Stimeling scored just 29 seconds later to even things, assisted by Kyle Dunn and Dom Carozza, and that’s how the first ended, 1-1.

Enter Dylan Sadowski, who scored the next two goals, one off a feed from Owen Miner and the other unassisted from the left wing at 1:03 and 8:20 of the second, respectively, to make it 3-1.

Unfortunately for the Tomahawks, it didn’t stay that way. Even more frustrating was the fact Sadowski had a golden chance at a regulation game-winner, staring at an empty net but the puck bounced by him.

“We typically see a lot of each other,” Keene coach Chris McIntosh said. “A great high school hockey game. … Jerred, when he wants something, he’ll get it, man. If he’s not Player of the Year or up there with some of these guys, I don’t know who is. One of the engines for the team, for sure.”

The overtime was spectacular as both teams survived power plays. The ‘Birds, who got 28 saves from goalie Jacob Russell, hit the crossbar twice.

And thus, the jumble atop Division II continues. Merrimack has lost to both St. Thomas and top-ranked Goffstown in close games, and will face the other top five team, Oyster River, at the end of the season. Oh, and they’ll see Keene again just before that on Feb. 24. Do the Tomahawks feel they need that win vs. a contender to get more confidence?

“Not really, we’ve got eight wins already,” Belliveau said. “The kids have eight wins already. It’s just a matter of being able to push through some of the challenges that we’re facing. … I thought today the kids, against a team like that, we’ll take the tie. We were looking for the win, no question about it.”