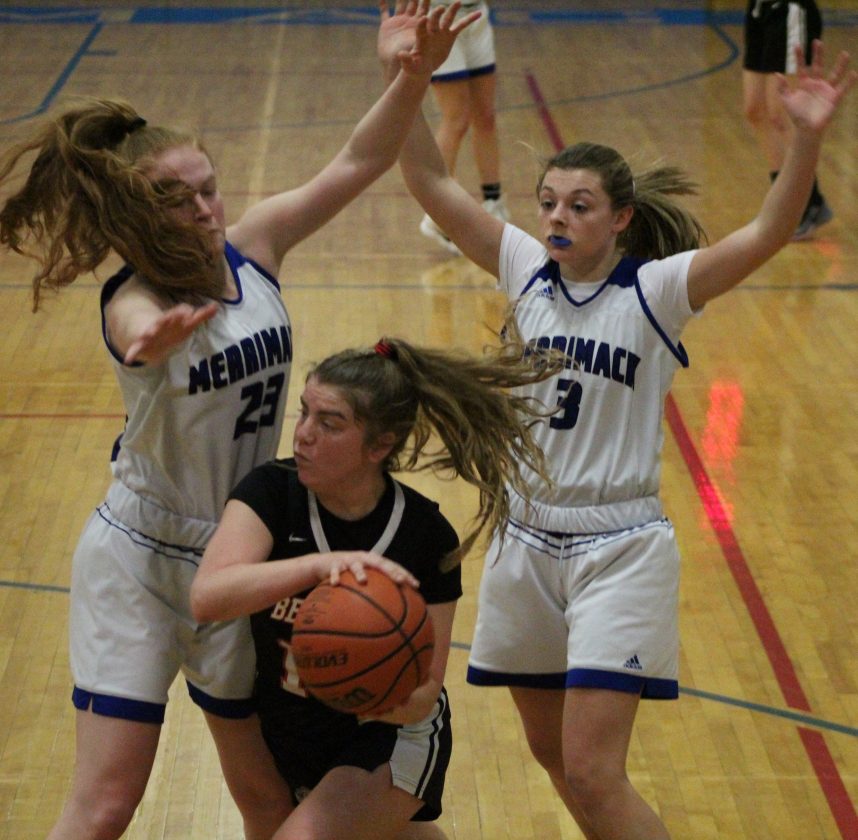 Telegraph photo by TOM KING Bedford's Allison Morgan looks for an escape from the double team of Merrimack's Riley Crampton, left, and Theresa Twardosky during the Tomahawks' 47-46 win Tuesday night in Merrimack.

The real Tomahawks – they of the tenacious defense and aggressive offense – finally showed up in a big way in the fourth quarter of a 47-46 thrilling triumph over Bedford on Tuesday night at the H. Dana Taylor Gym.

To hear them tell it, the Tomahawks weren’t themselves in a blowout loss Friday at Bishop Guertin.

“Friday against BG we didn’t play who we are, we played timid,” said Tomahawks guard Theresa Twardosky, whose free throw with 5.7 seconds left was the difference. “We played them soft which we should have never done. Tonight we played aggressive, and that’s what we need to do to every team.

“We just played who we are. We put a lot of work in, we put the pressure on, and (the Bulldogs) couldn’t handle it.”

It was amazing, as Bedford, which was in command, 42-33 after three, managed just four points in the final quarter – all on free throws. The Bulldogs in essence wasted a 32-point effort from Isabella King and are now 10-3 while Merrimack improved to 13-1. It was a big win for the ‘Hawks as everyone is scrambling to avoid finishing fourth or fifth in Division I to avoid having to face BG in a potential semifinal.

“I don’t really worry too much about that, it’s one game at a time,” Merrimack coach Mike Soucy said. “We’ve been a pretty good defensive team all year. We’re better if we’re able to press a little bit, take them out of rhythym, take them out of what they want to run offensively. We were able to do that – if you can score. For awhile, we couldn’t score and get into our press.”

Bedford coach Kevin Gibbs was stunned to see his team wilt the way it did in the final eight minutes without a field goal.

“They were playing a more chaotic style of ball,” said Gibbs, whose team led at all the stops, including 10-6 after one and 27-21 at the half. “We let them dictate the tempo, which caused turnovers. That’s it, plain and simple. Rather than play our own game, we played their game, and that was the difference tonight.”

The game was tied at 46 after two King free throws with 2:19 left. Bedford later turned the ball over with 1:16 left – a King travel – and Merrimack called time with 1:07 to go. The mission was clear: whittle the clock down and get the last shot. Twardosky, who almost lost it during that span, drove to the hoop and drew a King foul with 5.7 seconds left.

She made the first, missed the second, and after a Bedford time out/inbounds in front of the Merrimack bench, Bulldog Allison Morgan’s heave was off the mark at the buzzer.

“It was a good read, a good take, a good decision on her part,” Soucy said of Twardosky, who led the way with 15 points while Samantha Page and Riley Crampton each had eight. “The timing of it was almost perfect. I would have liked a couple more seconds maybe (off the clock), but you can’t pass up the window. You’ve got to take it.”

“They put a zone on us (on the final possession), we let the time run down,” Twardosky said. “I knew she (King) came up on me, I had to drive it.”

That’s the Merrimack team that everyone has known and loved this season.

“The Guertin game wasn’t who we’ve been all year, and that’s on me, not on them,” Soucy said. “We took a conservative approach. It was a mistake. And we’ll learn from that, and move forward.”