Stapelfeld comes through in the clutch for Cavaliers 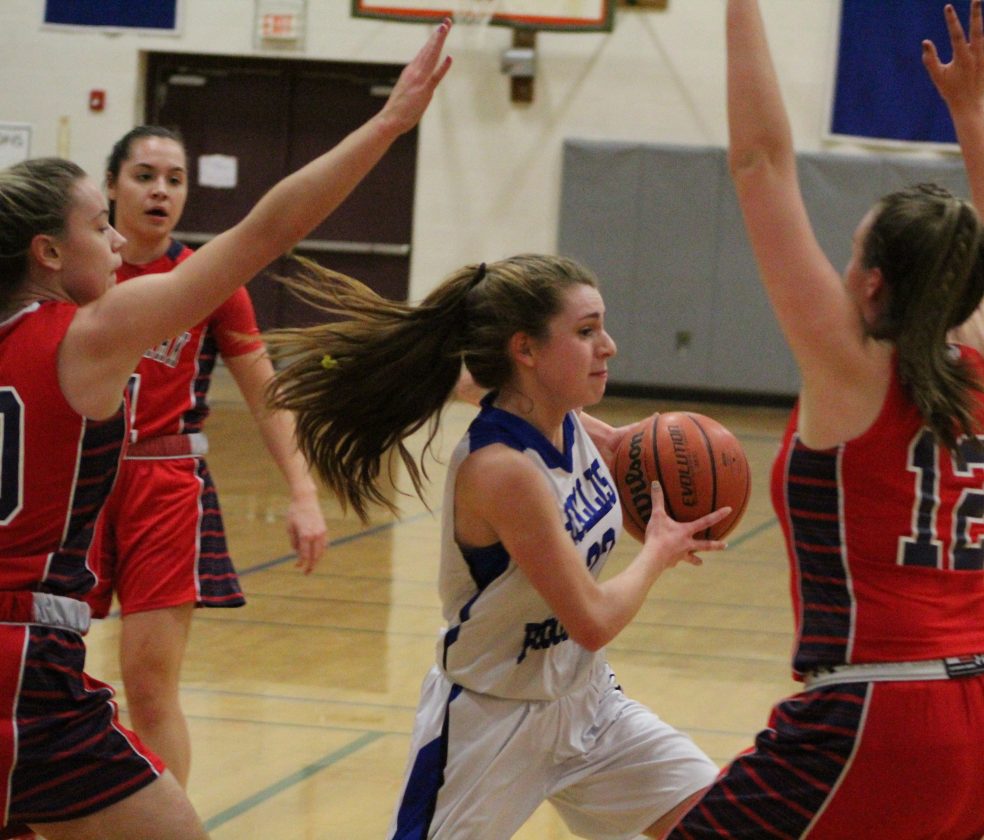 HOLLIS – A name from the recent past helped rescue the Hollis Brookline High School girls basketball team on Monday night.

Everyone remembers the shooting heroics of Cavaliers alum Cassandra Stapelfeld, who helped the team to the Division II finals in 2017 and is now at St. Joseph’s College in Maine.

Introducing the next Stapelfeld, Elisabeth, a sophomore who had her best game just when the Cavs’ needed it in a 57-46 win over John Stark.

You see, Cavaliers leader Christina Balsamo is just recovering from the flu,picked up her fourth foul early in the third quarter, and was a scoreless non-factor. But no problem, as the 5-6 Stapelfeld came through with 26 points to keep HB unbeaten at 13-0.

“I don’t think it was up to me, we’re all good options,” Stapelfeld said. “We can all put the ball in the hoop. But I definitely had more energy, was being more aggressive, more confident.”

Indeed, she penetrated through the Generals’ defense at times at will. Her 10 fourth quarter points were clutch, including seven straight after Stark (9-4) had cut the margin to 45-39 with four minutes to go.

“She was super,” said Cavs coach Bob Murphy, who also lauded the ball handling work of Elizabeth Bonnette. “We needed it tonight from her, and she did it all – not only on offense but defense as well.

“She’s a kid that plays year-round basketball. She’s probably the best sophomore that I’ve seen on the offense and defensive level at this age that I’ve had. And I’ve had some good players.”

HB’s only other player in double figures was Cheyenne Colbert, who had 10 points but also was a force inside on the boards with 10 rebounds. Stark was led by Chelsea Woodsum’s 17 points and 13 from Lillian Stogner.

But besides the confident play of Stapelfeld, what also aided HB was the fact Stark had trouble from the foul line, after the Cavs were in the penalty for a good portion of the final period. Stark was just 11 of 24 from the line.

“We’re usually very good from the free throw line,” Johnson said. “We hadn’t been in the gym because we had school cancelled for a couple of days last week. … It’s just been a mess. It’s what happens.”

This was a huge win for the Cavs, who wouldn’t have had Balsamo for this past Friday’s scheduled game vs. Hanover. But weather postponed the game, which will be made up on Feb. 24, but not before the Cavs have to visit the Marauders up north on Friday.

“I’m just happy with the rest of the team tonight,” Murphy said. “The teams that we played up to this point have been pretty weak in the standings. Then all of a sudden you get hit with these guys, and they’re tough. I’m thrilled, because we lost this game last year to them. It helps us stay where we’d like to be, in the unbeaten ranks.”

If someone were to tell Johnson his team had held Balsamo scoreless and still lost by 11, he would have been stunned.

“That was part of our intention, to hold her down and I thought we did a really good job of it,” he said. “But they’ve got more good players than just her.”

And so essential to a win on Monday.