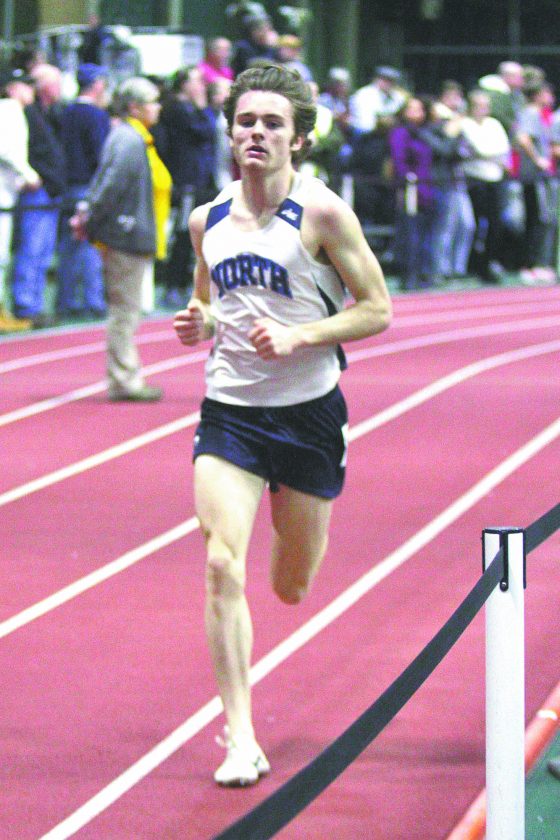 HANOVER – At one point in the Division I State Meet on Sunday night, NHIAA officials made the announcement to clear what had become a heavily congested infield.

They told everyone to get out, but it might as well have been directed to the folks from Nashua.

Area athletes repeatedly turned the infield into a winner’s circle, and the folks were there to salute their heroes on a special day.

“What a great day!” said Nashua North senior Yassine Jakib, “We knew we needed to come out and score points in every event. We’re tough. We’re committed. We just wanted it.”

In all, 11 individual champions with ties to Nashua were crowned, including South’s sizzling sprinter Paul Marchand and North’s distance dynamo Rory Curran.

Both the North boys and girls claimed second place plaques, and Curran had his hands – make that feet – all over it.

“I’ve been waiting for this all season, so I’m excited,” said Curran, who just for kicks tossed in a dynamic leg in the 4×400 relay minutes after crushing the 1500. “I woke up, felt so good. I had put in the work and trusted the process. I knew this was going to

“I knew I was capable, and I just wanted to go out and do the best for my team.”

The North boys, who were behind champion Pinkerton Academy, had one other champion, hurdler Nasir Perry.

Just one week ago at Phillips Exeter, Pinkerton’s Conor Seleny got the better of Perry.

The Titan scored payback when it mattered most, outleaning the Astro at the line to score in 7.57.

“Hard work and practicing,” said an out-of-breath Perry, winning his first state title ever. “It feels amazing. I just focused on my lane and took off as soon as the gun went.”

South’s Marchand, whose winter has been nothing short of spectacular, closed it out with a flash, blitzing the field in the 55 meters and the long jump.

“I came in here focused on the long jump. I had my goals written down since Dartmouth Relays: Win 55 in 6.55 and win long jump plus-22 feet. And I beat both. I can’t believe it.”

The Cardinal was the lone boy over the bar at 6-foot-2 on Sunday to win, ahead of his teammate Ethan Holt, who was third at 6-feet.

Renee Archer’s Nashua North girls (57) had their game-faces on from the start on Sunday, taking home second behind runaway winner Exeter (104).

The Titans got the jump on the pack, literally, with sophomore Olivia Mazerolle scoring the win in the high jump, clearing 5-4.

Almost simultaneously, teammate Tori Conrad obliterated the school indoor and state meet mark in the shot put with a heave of

“It just happened,” said Conrad, who had been coming close all winter to reaching the mark. “That’s from a lot of practice. I’m very happy.”

Titan Dantia Braccio came from one of the lower seeds and turned in an absolute blazer, winning the 1500 meters in a field that included the defending champ, Bishop Guertin’s Caroline Towle.

Braccio, a sophomore, sprinted to the front in the opening strides of the race and just kept widening. With an eye-catching time of 4:59.53, Braccio was nine seconds in front of her nearest

Towle, who took third, had a superb win in the 3000 for the defending champ Cardinals, who placed fourth overall.

And in another upset, it was Alvirne’s Molly O’Donnell taking home the title in the long jump. She flew 17-0.5 to just nip Guertin’s Grace Jones (16-11).

“I didn’t do that well in high jump. Then I came in (to long jump) down at fifth or sixth, and on my first jump I fouled,” said the Broncos’ sophomore of her auspicious beginning. “It was just a real good jump. I was just trying to do my best. It was my only event left, so I wanted to do my best and give it my all.”

Milford placed fourth with 34 points, led by a pair of individual champions.

Junior Renee Wilson simply crushed the field in the long jump, winning by over a foot. The Spartan leaper defended her state indoor title with a top jump of 17-6.75.

Souhegan was seventh overall and the splendid sophomore distance sensation Chloe Trudel did not disappoint.

Campbell High was paced by Tori Allen. The hoop/track dual sport standout was second in the high jump, clearing 5-feet and added a fifth in the 55 hurdles.

On the boys side, Milford was the top local performer, grabbing seventh place overall.

Caleb Korthals delivered a monster effort in the 1500, grabbing second overall in 4:12.85. Teammate JR Ughu also exceeded his seed, placing second in the shot at 46-4. Campbell’s Joshua Hoffman was third.