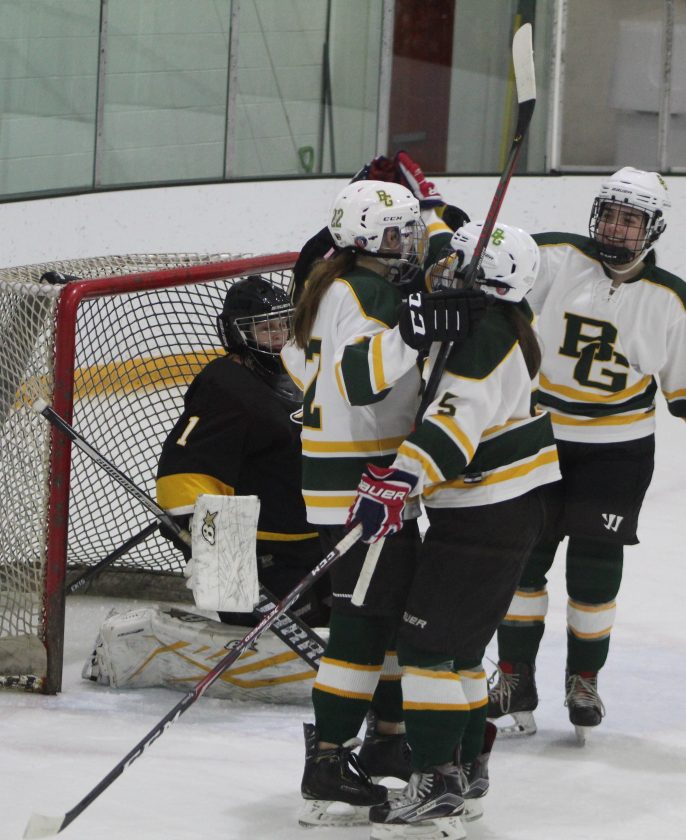 Telegraph photo by TOM KING Bishop Guertin's Jill Scanlon, left, is congratulated by her teammates after scoring the game's first goal, much to the dismay of Souhegan goalie Ellie Byram during BG's 6-2 win Saturday at Skate 3.

“In that movie the Avengers, they’re talking about how the Avengers can’t save the world,” Ciszek said. “Then Robert Downey, Jr. says ‘We’ve got a Hulk.

“Well, we’ve got a Hult. She’s definitely a mammoth player for us, and she can carry the game. We lean on her quite a bit.”

That’s exactly what the Cardinals did in a 6-2 win over Souhegan on Saturday at Skate 3 Arena. Lindsay Hult had a goal and two assists, but her skating and overall play set the tone as she took at least 15 shots in the game but was also a blue line presence. And when the Sabers (4-6-1) closed to within 4-2 early in the third period, Hult would have none of it, scoring a clinching goal at 8:43 and assisting on another just 24 seconds later.

“The past couple of games we’ve given up a little in the third period,” said Hult, who has already surpassed the career 100-point mark as a junior. “But I made sure to not let that happen this game.”

Hult also assisted on the Cards’ sixth goal, as Brooke Yabroudy deflected her shot into the net at 9:07.

“She makes it a lot tougher,” Souhegan coach Kelli Braley said of Hult. “We contained her for a little while and she put those last two in, and had a couple of second assists. It was tough.”

Guertin also got two first period goals from freshman Jill Scanlon in taking a 3-0 lead after one period, the other tally by Julie McLaughlin. Assists in the period went to Hult, Yabroudy (two), Riley Molongoski, and Kathryn Simpson.

Byram (33 saves) was under siege the entire 15 minutes, as the Sabers were just slow to get their game going.

“The first period is definitely what did us in,” Braley said. “That’s kind of been our Achilles heel all season. It’s tough for us to get going in the first period. The silver lining is we usually get better, which we did today, but it was too little too late.”

McLaughlin got an unassisted goal at 5:23 of the second to make it 4-0, but finally the Sabers got untracked as Ryleigh Tobin beat BG’s Sarah King (23 stops) with the first of two Olivia Harnish assists just 26 seconds later to make it 4-1. And when Julia Pinkham flipped a power play knuckler 57 seconds into the third past King, it was a game.

But not for long, thanks to Hult, who has already committed to Holy Cross for two years from now for lacrosse. Indeed, the Cards with her on the ice certainly don’t look like a 4-7 team.

“I think we’ve played a complete game these past couple of games,” Hult said. “I think if we had played like that in the beginning of the season it would’ve been a different record.”

“The biggest thing is our consistency and our ability to close a game,” Ciszek said. “We have the talent, we have the depth. The team’s been coming along and they showed it today. We were able to take care of business and play a whole 45 minutes. …

“Today was all about pressure and supporting each other. I know (Souhegan) has some good players, some talent.”

But it’s the Cardinals who had Hult to eventually save the day.