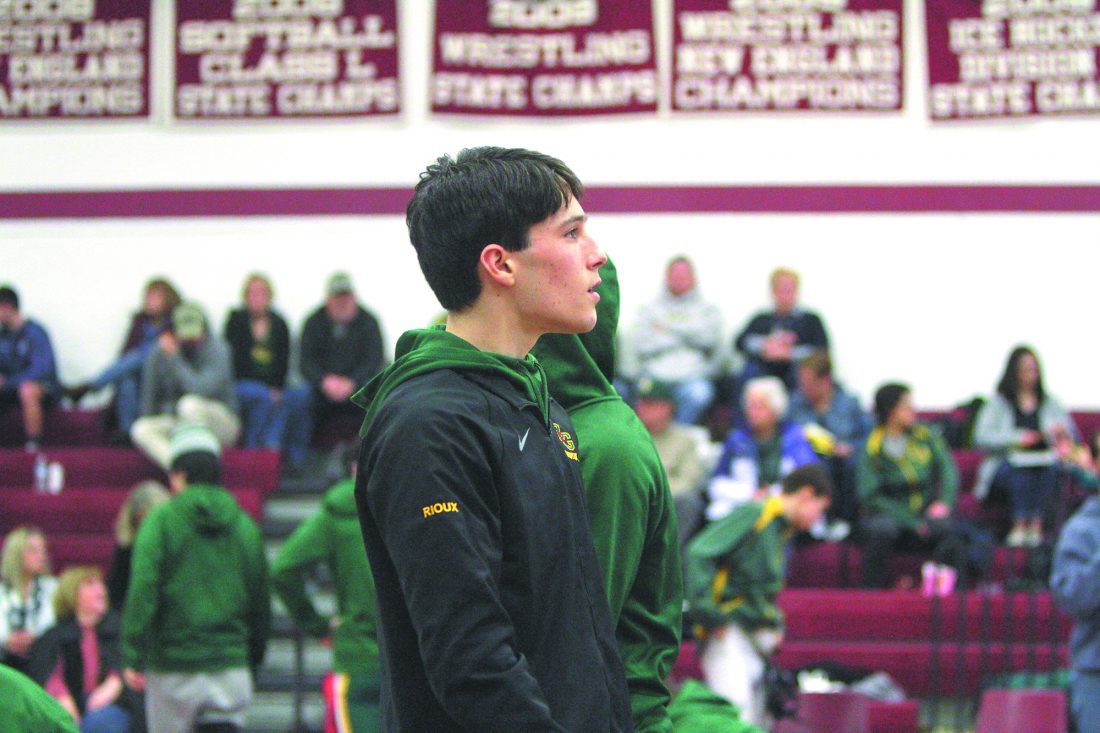 You never know who you might bump into and rub the wrong way.

“Nobody usually tries to pick on me,” says Rioux, who plays with the concert band, marching band and has dabbled with the jazz band in the recent past. “I joke around with (the ridiculous band geek stereotype). I like music and I like being involved. It definitely works for me.”

When he’s not jamming with the Cards on the baritone sax, the junior is rocking in a different realm, with the BG wrestling team.

Saturday here at Timberlane Regional High, the 2019 Division II state champion at 138 pounds, added three more victories to the already-stacked resume, wins 94, 95 and 96 for his career.

Not bad for the band geek.

Interestingly enough, Rioux got his start in both at almost the same time in the same place, Sunset Heights Elementary School in Nashua.

“Eleven years ago, I started wrestling because I was too young to play basketball,” said Rioux, who was runner-up at the NHIAA Meet of Champions as a sophomore. “I got a flyer about wrestling and decided to try it. I’ve been loving it ever since.”

What does he love about it most?

“The commitment, the people, the drive, the discipline it teaches you, all of it,” said Rioux, who wrestles year-round with the Doughboys club in Lowell, Mass.

A couple years after first hitting the mat, the folks in the music department put an alto sax in Zach’s hands. He’s been wailing on it ever since.

Rioux moved on to Elm Street Junior High and made the decision to give BG a try when high school rolled around. Wrestling played a huge hand in that.

“I thought the academics were better, and I had friends who were there already,” he said. “I loved the wrestling team, and the coaches were great. I just felt welcome.”

He has done nothing but blossom at Guertin. Along with the work in wrestling, baseball and band, Rioux is in the student government and has rung up some major numbers academically. Currently, he ranks in the top 10 of his class of just under 200 and recently scored a 1350 on the PSAT. He’s hoping those numbers, plus the work he continues to do on the mat, will translate to future opportunities.

“I would definitely like to wrestle in college,” said Rioux, who has eyes on a computer science or engineering major.

But first, there is plenty of work left to be done at BG.

First and foremost is “the question,” – as in when will the Cardinals win a state wrestling title as a team?

“That’s the goal,” he said. “We’ve never won it. Its what we’ve been gunning for the past three years, and many years before me. I think we have a good shot.”

For Rioux, though, the good times are ahead. While many a wrestler struggles to the finish of a grueling campaign, he feels February fresh.

“I don’t consider all the work as punishment,” he said. “As long as you work hard every day in the room, manage your weight outside, watch what you eat, watch what you drink, you’ll be fine. You just have to put in the work. What you put in, you get out.”