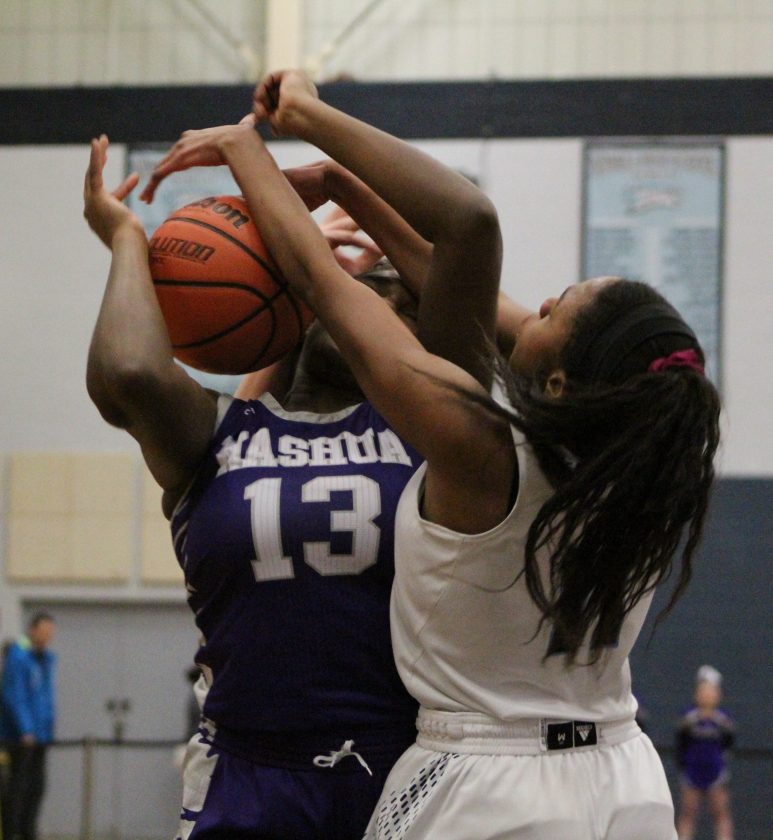 The Nashua High School South boys and girls basketball teams sent the Battle of the Bridge into an 8-8 deadlock with a surprising sweep of the host Titans on Friday night. The South girls gutted out a a 40-37 win in the opener, but the stunner was the boys nightcap when South handled North, 55-43, snapping the Titans’ seven-game winning streak.

“Coach Maz (Nate Mazerolle) stresses defense, and we do it a lot in practice,” said South’s Andres Hulfachor, who scored 18 points while teammate Ivan Nyantenji also had 18, said. “Sometimes we like it, sometimes we don’t, we moan and groan. But we get it done, we work hard, and that pays off in the end like big games like these.”

The Titans, thanks in part to South’s tenacious defense, likely had their worst shooting night of the season in the 25 percent range. North led 15-14 after one, but South (7-4) led 25-24 at the half and 35-33 after three before breaking away with some clutch foul shooting down the stretch. And that was after North had gotten off to a 7-2 racehorse start after the opening tap.

“Sometimes you outcoach yourself,” Mazerolle said. “I hate zone (defense), I never run zone, and we put in a zone. They hit a couple of 3s. And the kids said, ‘Coach, we’re a man to man team. And they really did a great job.”

“South was the better ball club tonight,” said North coach Steve Lane. “They deserved the win. Executed, gave us a little wrinkle to start the game, was more physical than we were, the 50-50 balls were theirs. All the credit to South tonight. They played a heckuva game.

“The bottom line is they deserved to win and we didn’t.”

Brenden Choate had 19 to lead North, but only six in the second half. And the the Panthers held Titan floor leader Curtis Harris to just two in the first half, although he finished with 15.

But the rest of the team managed just nine. After Harris dunked to tie things at 35 at the start of the fourth quarter, the Panthers went on a Hulfachor-Nyantenji keyed 7-0 run that basically decided the game. And in that final quarter, the Panthers had 12 points from the line on 12 of 14 shooting.

In the girls game, the Titans (3-10) had chances to either tie or go ahead down the stretch, and were foiled.

Then the game became a littany of missed free throws. After Julianna Martin – game high 16 points – missed two free throws, North center Victoria Conrad got a rebound – only to have it knocked away by Panther Catherine Covert. Aryanna Murray got the loose ball, was fouled, and hit one of two free throws to clinch it with 4.6 seconds left.

“That’s been the story of the year, we hadn’t hit those tough shots when we needed to, but we stuck through it,” South coach John Bourgeois said. “I didn’t want anything more than for these girls to win today, given how the season’s been going. They stayed positive the whole time.

“And Covert’s been an animal the last three games, getting 10 rebounds, 14 rebounds a game. She’s been extremely reliable. She’s a senior, she’s experienced, and it showed up in this game.”

Murray’s free throw allowed her to finish with six points. The Titans were led by the 6-foot-4 Conrad, who had five blocks, 14 rebounds to go with her 16 points. Brooks and Caitlyn Laurendi added five points apiece.

“We’re playing well. They all did a good job. It came down to free throws, not just so much down the stretch but in the third quarter (2 of 7).”

“They needed a win tonight,” Bourgeois said. “I’m happy for them. We were getting nervous there for a couple of possessions.”

But on this night, everything still came up Purple.

Just as in the fall, the Battle of the Bridge tie will be broken by the showings of both in the state spirit championships next month.