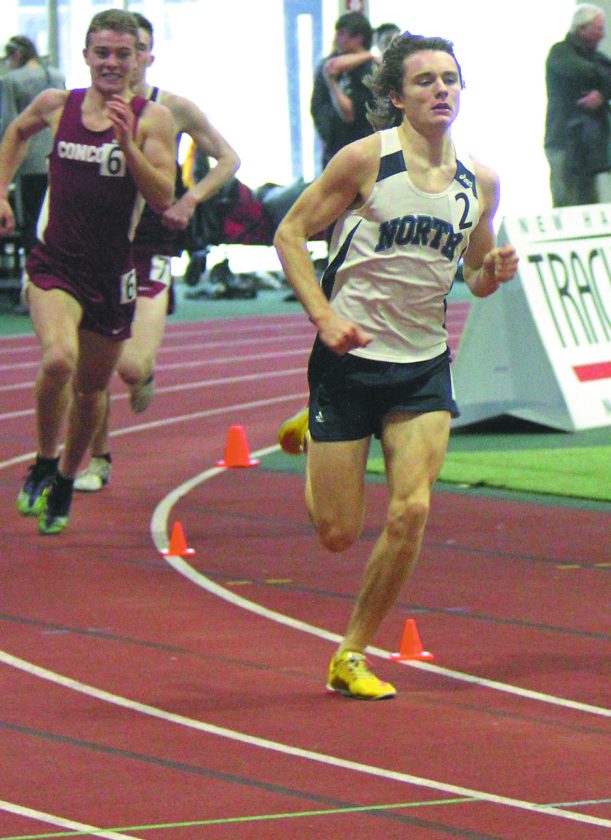 Runner-up at the Division I State Meet and fourth at the Meet of Champions a week later, Nashua North senior Rory Curran, our 2019 Telegraph Cross Country Runner of the Year, was the lone area runner in the top-10 at either race this fall.

For some athletes, Sunday’s NHIAA State Track Championships at Dartmouth will serve as a springboard to the outdoor season.

For others, it is title time. State championships are there for the taking, and if past efforts can help predict the future, the area should certainly have its share of prime-time performers.

This year, the Division II meet opens the day at the Leverone Fieldhouse with the action kicking in at 10 a.m. The Division I meet will then commence at 3:30 p.m.

Bishop Guertin senior Caroline Towle delivered an epic performance a year ago in this event, grinding out the toughest of doubles, winning the 1500 and 3000, to help the Cardinals secure the team

Towle is back again in both, hungry to defend.

Speaking of stirring title defenders, Nashua North’s Rory Curran has been an absolute pillar of courage through four years.

The Titan is the current 3000-meter champ, and top seed in the event, too. Like Towle, he will also run in the 1500, a spot where he finished third a year ago, a rousing third.

“(As a team), we are looking for a top-5 finish,” said Titans coach Art Kobs.

To do that, Curran might again need a special performance.

When you think of special, you think of the season that Nashua South’s Paul Marchand has had indoors, most recently setting the school long-jump record with an eye-popping leap of 22-10.25 at the East Coast Invitational Meet.

“I believe Paul Marchand can be a multiple event winner,” said South coach Doug Booth. “He is by far the top long jumper in the state and he is one of the top three 55-meter runners in the state. I also see Paul scoring in the shot put and in the 4 x 400 relay.”

Other city threats to do some damage on the boys side include North hurdler Nasir Perry, while Titans Connor Dunning (300) and Sean Quinlan (high jump) will be shooting for big points.

On the boys side, Bishop Guertin has the No. 1 and 2 seeds in the high jump with Jacob Pacheco and Ethan Holt.

Pacheco is the only jumper in D-I to go higher than 6-feet indoors this winter, having cleared 6-3.

Alvirne’s best chances to score should come from senior Davante Mckoy-Sophos in the 300. Bronco Justin Broussard is the No. 3 seed in the shot put.

Merrimack will look to its 4×200 team of Zach Twardosky, Johnathan Paulhamus, Eli Demeo and Declan Covell for its top chances to hit the podium.

For the girls, Nashua North has a pair of top seeds with shot-putter Tori Conrad and sprinter Abby Coy (55 meters).

In addition, sophomore Olivia Mazerolle is the No. 2 seed in the high jump, having cleared the same height of 5-4 as the top seed.

Coy is also the No. 4 seed in the long jump, where Guertin junior Grace Jones is the No. 1, having flown over 17 feet this winter.

South is banking on the return of Cali Coffin the emergence of freshman Grace Harris to help push its 4×800 meter relay team into a top-three finish.

Keep an eye on the Tomahawks’ 4×200 team of Mary Vance, Sydney Ogbunamiri, Ally O’Brien and Johanna Koroma, seeded sixth but ready to pop a big one.

When talking about the Division II from the region, the focus is all about the girls.

Defending state long jump champion Renee Wilson heads up a Milford High contingent that was an area-best third a year ago.

The junior is again the top seed in the event, just ahead of teammate Sarah Sawyer.

Classmate Leslie MacGrath is the only girl in Division II to clear 5-4 in the high jump this winter.

Robyn Krafft is the second seed in the shot put, where she was third a year ago.

Souhegan sophomore Chloe Trudel could be ready for a huge day, seeded first in the 3000 and second in the 1500.

Katerina Stuopis (shot put, high jump) will be hunting for the podium in both.

Campbell has its top hopes on Tori Allen in the high jump and hurdles, along with freshman rising star Ava Houle in the long jump.