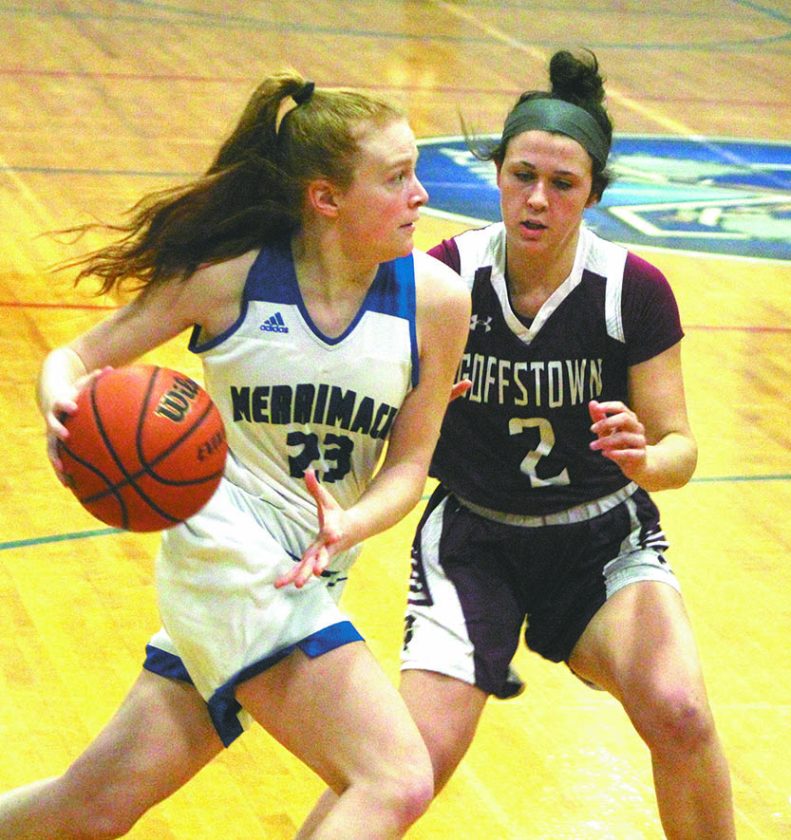 It is one of the marquee games of the winter regular season anywhere in the state tonight: 12-0 Merrimack High vs. 12-0 Bishop Guertin.

Senior Riley Crampton, who according to coach Mike Soucy is “the glue that holds (the Tomahawks) together,” feels like her team will be ready for the ultimate challenge against the undefeated, undisputed four-time defending state champion Cardinals.

Thursday’s snow day allowed the extremely busy Crampton a few minutes to talk hoops, her future, and yes, the battle with BG tonight.

So, Riley, it’s the ultimate showdown. Is Merrimack ready?

“They’ve been undefeated for years, we haven’t been like that. We have nothing to prove. We have no pressure. We’re going to go in and play our game, do what we’ve been doing the last 12 games.”

“We’re really excited for that. With the boys game first, we know our fans (The Merrimack Tribe) are going to be there for us. In fact, it’s going to be a “Blackout” game.”

You said it, I didn’t. BG has basically been invincible. Be honest, is there an intimidation factor?

“Last year, I definitely feared them, but this year we have a strong team. I know we can compete with them, I’m not scared of them now.”

Your team has been awesome so far, winning the Christmas tournament and staying perfect. Does it surprise you, being the fact that this is Coach Soucy’s first year?

“Going into the season with a new coach coming in, we were a little hesitant. I felt confident because we are an older team that has been playing so long together. We’ve been playing together since the travel team in third grade.”

All right, so tell us about your classmates on the team.

“I can always count on her for anything, on or off the court. She’s always motivating me too.”

“She’s one of the most athletic girls I’ve ever seen, so quick, especially on defense and off the first dribble.”

“She’s one of the loudest girls I know. She’s always there, cheering us on. She just picks everyone up.”

“She just works so hard, puts a lot of effort in. She’s always putting in 100 percent.”

Senior year, and you are all so close. Things could get emotional pretty soon?

“That definitely motivates me to do better. It’s my last year to play with my best friends.”

So what else is there in your life besides basketball?

“I’m either playing basketball or working at Apple Blossom (day care). I love working with kids. I also try to get to as many Merrimack High sporting events I can as a fan.”

How about in your free time?

“I like to go out with my friends on as many adventures as I can. We went up to Old Orchard Beach in Maine this summer. We tried to surf. I really couldn’t but it was cool watching them do it.”

How about in school, do you get the job done in class?

What is your favorite class?

“Definitely math. The teacher (Mr. Donald Chisholm) that I have makes it easy to learn. Mr. Chisholm makes math fun.”

Finally, it’s getting late here in the game. What are you up to next year?

“I’m going to Mass. College of Pharmacy and I’m getting into their six-year program (to be a pharmacist).”