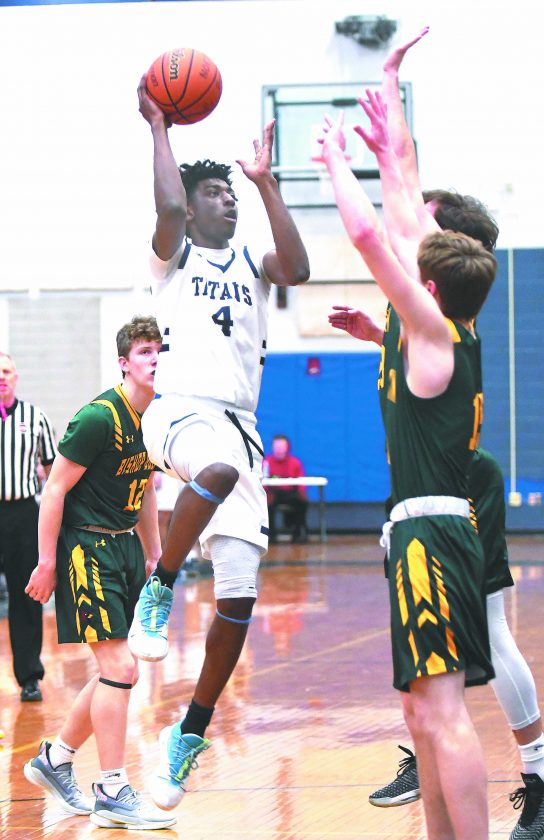 NASHUA – Sometimes the scoreboard doesn’t tell the whole story and the standings don’t either. Sometimes, one just has to throw expectations or reactions out the window and enjoy a good basketball game.

Bishop Guertin junior Dylan Santosuosso drained a three to give the game its first bucket about a minute into proceedings, also giving the Cardinals what would ultimately be their only lead of the contest. Senior Chukweuemeka Okorie answered with a three of his own to even up the contest just seconds later and the Titans then would go on a 14-6 run for the rest of the quarter to build an advantage that the guests could not counter over the rest of the night.

North’s advantage grew as high as 18 points at its zenith, as they knocked down shots with the Cardinals struggling to

Instead, he felt the difference came from an excellent defensive night for his squad.

“Defensively I thought was the difference tonight, especially in the first half,” “I think our defensive effort set the tone for us getting easy buckets in transition and us getting out and running in our style. I’m happy, it was a good win.”

Even when the Cardinals managed to inch back at points in the second half, the Titans quickly responded, with Chukweuemeka and junior Connor Dunning each grabbing multiple threes on the final two quarters to help stem any Cardinal momentum.

“We just got better looks tonight, we didn’t settle, we got looks that were open,” said Lane. “We’ve got some pretty good shooters and they showed it tonight. I’m happy for them.”

Chukweuemeka led the way for North with 15 points, followed by 13 from junior Nathan Kane and 12 a piece from junior Curtis Harris and senior Brenden Choate.

Santosuosso had 18 for the Cardinals and Mullett finished with 17, going 8-for-9 from the stripe. Junior John Sullivan also contributed four points and ten rebounds in the loss.

Both teams leave the night with seven wins, with the Cardinals now at 7-2 and North tied with Portsmouth and standing just behind Exeter at 7-0.

Despite the two teams’ records, Lane did not see the win as a significant milestone, instead preferring to the Titans’ next game against Pinkerton at home on Tuesday.

“It’s still early in the season, you gotta keep playing and play them all,” said Lane. “There’s no game where you can just show up and say ‘there’s your win,’ so we got to show up and be ready on Tuesday.”

Bishop Guertin will also be in action on Tuesday, travelling to Windham for a 7 p.m. tilt.