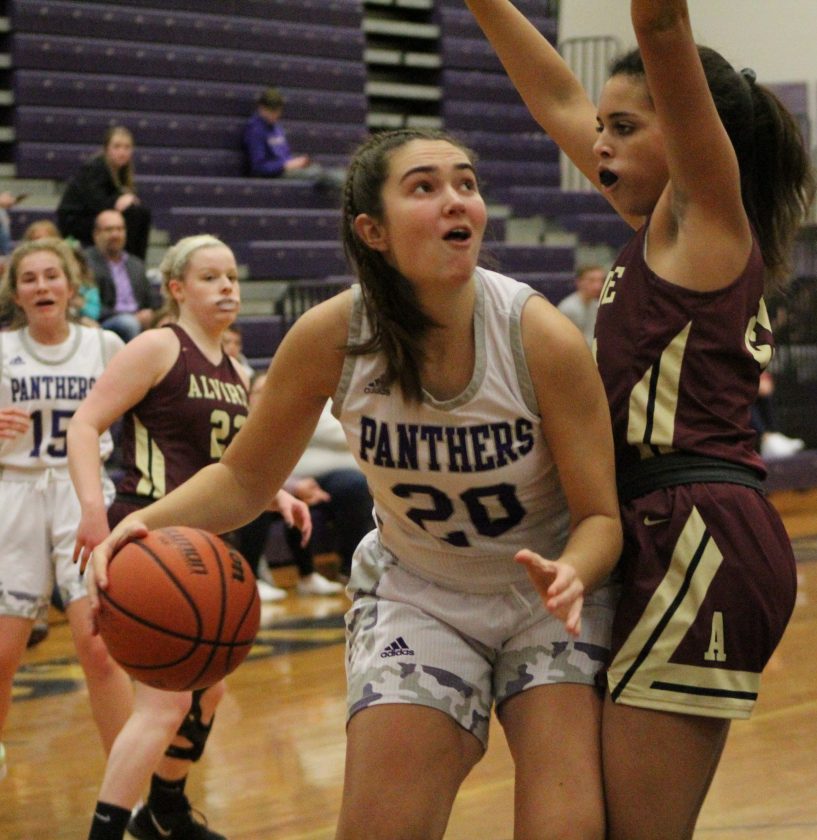 NASHUA – You can bet that Nashua High School girls basketball coach John Bourgeois had one message for his team Tuesday night after a horrendous first quarter:

It’s not how you start, it’s how you finish.

That’s because the Panthers couldn’t have started any worse in spotting Alvirne a 15-3 lead after the first eight minutes.

But, much to the Broncos’ chagrin, the Panthers finished strong, holding Alvirne to just 15 points the rest of the way in a 42-30 South win.

“Absolutely, that was the game plan for today,” South coach John Bourgeois said with a grin about finishing stronger than they started. “We just wanted to play all four quarters. We can’t panic after that first quarter, and that’s what we didn’t do.”

South got a spark off the bench from sophomore guard Jordan Rioux, who led the Panthers with 10 points, eight in the final period.

“I guess we just wanted it more when we were down,” Rioux said. “That’s what fueled us to keep going and wanting to keep pushing.”

While the Panthers improved to 4-1 in Division I, Alvirne fell to 2-4 with its second straight road loss. The change in course after the opening eight minutes left Broncos coach Chris Cheetham shaking his head at the end.

“We stopped playing,” Cheetham said. “We went to offensive sets before that I’ve never seen in any practice I’ve ever run. We started dribbling around, people started trying to do things individually.

“It’s the curse of this team for the last two or three years for me. I thought we had solved it a couple of weeks ago.”

They’ll try to go back to solving it Friday at home vs. Nashua North. Sara Ruigrok led Alvirne with 11 points, but only four in the second half.

Meanwhile, the Panthers have to feel good about hanging tough when they had to. The rest of their scoring was spread out – Juliana Martin had nine points, while Catherine Covert added eight and Kirsten McIntire seven.

What changed for the Panthers? They began to turn things around in the second quarter with a 12-0 run before going into the locker room down 21-18. In the third period, though, they began to take control as a Martin 3-pointer gave them the lead for good at 27-25. Rioux hit a trey early in the fourth to make it 31-25 and despite hitting just 12 of 20 from the line, the Panthers pulled away.

“We missed about seven wide open layups in the first quarter,” Bourgeois said. “But we started trusting our offense a little bit more as opposed to getting a little but outside of ourselves.”

While Rioux sparked things off the bench offensively, Iruka Obinelo was also a spark defensively and on the boards.

“Absolutely, both of them have stepped up,”Bourgeois said. “We don’t have any star players on our team. Anyone that comes off the bench is an asset.”

Cheetham is still looking for that asset other than Ruigrok. Guard Grace Hodgdon, Paige McKinley and Hadara Ochieng each had five points.

“Sara Ruigrok is always a force for us,” Cheetham said. “We try to get paint touches for an in-out game. But after the first quarter, I don’t think we got a paint touch for the next two quarters.

Just the opposite for the Panthers.

“They came back, got it together, and played as a team,” Bourgeois said.

Yes, it’s all about that finish.