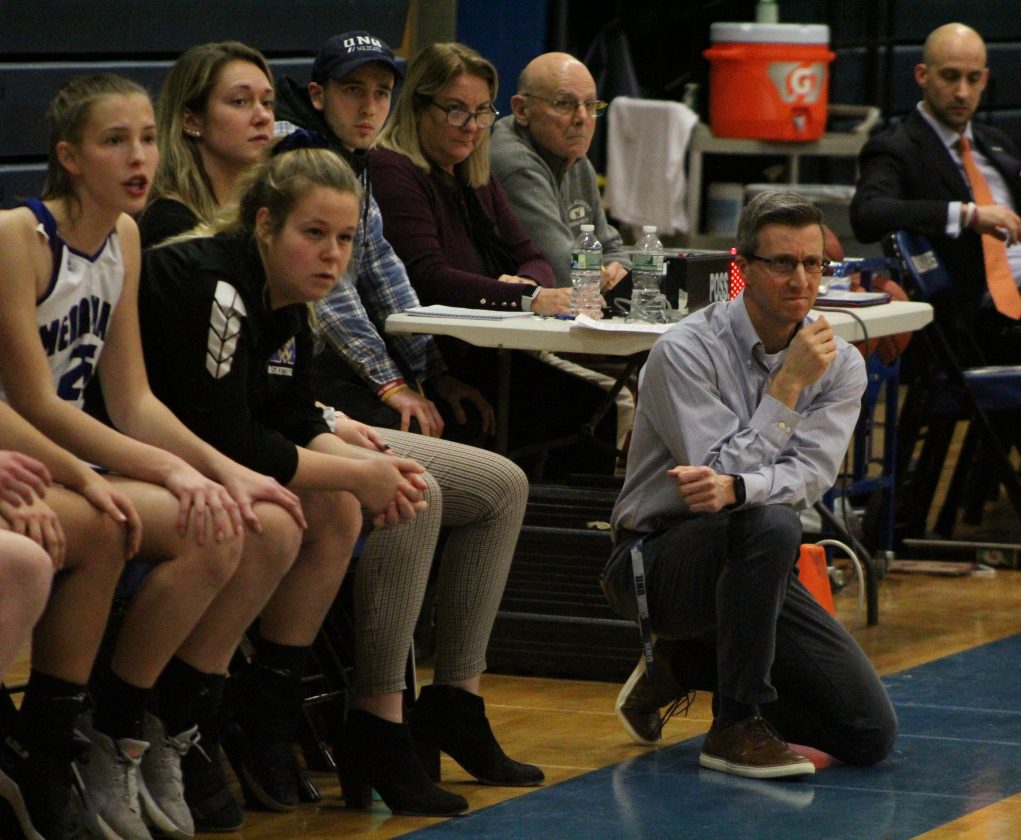 Telegraph photo by TOM KING Merrimack High School interim girls basketball coach Mike Soucy has the Tomahawks off to a 5-0 start in Division I, playing a tenacious style.

And then came this startling admission:

“Honestly, we didn’t even know Mike Soucy was a coach before,” Twardosky said with a chuckle. “No one even knew. But he’s a really good one.”

Yes, Soucy, also the Tomahawks athletic director, had been a coach for several years at Hollis Brookline, but put all that on hold for a couple of years after taking the Merrimack AD job. That, and also in his previous role as a guidance counselor, is what the Merrimack kids had known him as.

It’s only a month into the season, but things could not have started better for the Tomahawks – especially when one considers everything that’s happened with this program.

Soucy held out hopes that popular and talented coach Courtney Cheetham would reconsider summer thoughts of resigning, so there was no job opening or posting. She didn’t, so after a few weeks into the school year the job was opened. However, the candidate pool was, well, considered shallow at a time when most with head coaching experience were spoken for. Thus, with the clock ticking, Soucy made the call that he would take the program for one season on an interim basis.

So far? Thanks to a tenacious, pressing style, the Tomahawks are 5-0 in Division I and 8-0 overall going into tonight’s game at Windham. Those other three wins earned them the Chick-fil-A Holiday Festival tournament title. They can be down five or 10 and then up 20 in the blink of an eye. If you’re not ready at the start, the ‘Hawks can be up 30 in the first half, like they were vs. Nashua South in the holiday tourney final.

“That’s my team,” Soucy said the other night after a win over Goffstown. “They have so much grit and determination, it doesen’t matter whether they’re down or their up, they’re going to fight for 32 minutes.”

It’s been noticed. That Goffstown game was on a Thursday, an off night for most teams, and the stands were speckled with other Division I coaches. Current unbeatens such as heavy title favorite Bishop Guertin and contender Manchester Memorial certainly now know the Tomahawks are a threat.

And this year, they will press you all over the floor.

“I think what Mike is willing to do is he’s willing to stick with (the press) no matter what,” Goffstown coach Steve Largy said. “Like if we beat it a couple of times down the floor, he’s not going to change, it’s like that’s who they are.

“We talked about that this year about that being the difference with them. That’s their mentality. … That’s their game, that’s who they are, they’re going to come at you for four quarters.”

Soucy said he took the job because it gave him a chance to be around some athletes he already knew were very coachable and dedicated.

“It’s just an awesome group of kids,” he said. “They want to be good, they want to compete, they love to compete.

“It’s funny, when we’re in a practice environment and I’m in teaching mode, they kind of lose it a little bit. They just want to compete.”

“He’s awesome,” Twardosky said of Soucy. “He’s got a good offense, he’s smart, he knows what he’s doing. He knows when to pull up in practice, when to put it on, a really smart coach.”

It helped that Soucy knew the players.

“Knowing the roster pretty well, seeing them play a lot last year, knowing we had all the starters back, and the entire roster back except one senior who graduated, I knew we had the potential of being good,” he said. “I just didn’t know how they’d respond to me as a coach, and to a new system, but they’ve just embraced it.”

The ‘Hawks have six seniors and five juniors, including Twardosky. They can hit from the outside (Twardosky and senior Meghan Desfosses had three treys the other night vs. the Grizzlies) and can use 5-10 senior Samantha Page on the inside. Senior guard Riley Crampton will pick your pocket in broad daylight. Shannon Sadhwani is tough off the bench. Soucy can run five in, and five out.

“Honestly, we’re playing together,” Twardosky said. “We’re passing the ball around, no one’s selfish on our team, and it helps a lot. … We just work really well together.”

And thus Soucy lets the game flow as they can shoot from anywhere.

Of course, lost in all this is the fact Soucy has to juggle his AD job with coaching. Of course, longtime Tomahawks fans have to chuckle because legendary ‘Hawks former AD, football and softball Joe Raycraft did it for years. But things may be a little different today, as it’s not the norm for Division I schools.

“It’s a challenge juggling,” Soucy said. “But I have good people helping, and that makes all the difference.”

Soucy opted to do this with the idea it would be a one-year thing. But you never know.

“We’ll see,” he said. “That’s where I’m leaning right now. I’m not going to make any decisions until the end of the season.”

“I love it,” he said. “When you’re an educator, and you get to spend two hours a day, six days a week with a group of kids, there’s nothing better.”

And remember, he also had to make the transition from coaching boys to girls.

“In reality, there’s no difference with this group,” he said, “because they’re such fercious competitors.

“But it’s kind of a funny difference. With the boys (at Hollis Brookline), we couldn’t practice right after school. They needed to go home, take a nap, have something to eat, come back for a late practice and they’d be ready to go.

“The girls are the complete opposite. If we come late, they’re out of it. If we go right after school or early, they’re focused and determined and ready to go.”

Soucy is a popular figure in the school; the student fan section made up a humorous poster of a imaginary People Magazine cover of Soucy with a caption “First he’ll steal your heart, then he’ll steal your ball on defense”.

Not bad for a situation that looked to be in crisis mode back in September-October.

“Oh yes, very,” Twardosky said. “It was so late. The season was going to start in a month, no one had any idea what was going to happen.”

What’s happened has been the best possible outcome so far.

Here’s a few hockey notes as we hit mid-January:

One, Merrimack’s Zach Stimeling has a chance to reach a couple of milestones when the 3-1 Tomahawks take on Alvirne-Milford (2-3) at 4 p.m. Wednesday at Manchester’s West Side Arena. He’ll be looking for his 50th career high school goal and 100th career high school point, one away from each. …

Why is Bishop Guertin now 5-1? Cards coach Gary Bishop says it’s the ability to use his fourth line for significant minutes, thus resting the other three.

“With that fourth line, there’s three sophomores on there and they all skate,” Bishop said.

The fourth line is can be three of these four thus far: Colin Ferguson, Christian Milward and Luke Vogel to start with Matt Zeichick rotating in. A game to see will be the Cards vs. unbeaten Concord (5-0 right now) at Skate 3 on Wednesday, Jan. 22…

Hollis Brookline-Derryfield’s showing in the Conway Arena Holiday Tournament, making the finals vs. eventual champion Keene, was no fluke. The Warriors are now 4-1, with their last win coming late Saturday (in case you missed it) over Laconia-Winnisquam. The Warriors were led by Paul Vachon’s two goals – he has been very steady – and two assists each by Sal Vella and Aidan Rowe. HBD will be hosting Pembroke-Campbell at Conway Arena Wednesday, but a game that could be a key matchup will be vs. current 4-0 Belmont-Gilford on Jan. 25, also at Conway Arena.

The Hollis Brookline girls basketball team got through a tough schedule week unscathed, beating both Lebanon and Bow at home. The Cavs are now 5-0, and if you’re looking for another tough back-to-back for them, it comes Feb. 7 and 11, vs. Hanover and John Stark – also unbeaten…

There’s a new event in the state indoor track season’s slate – a team pentathlon competiton at the University of New Hampshire this Sunday.