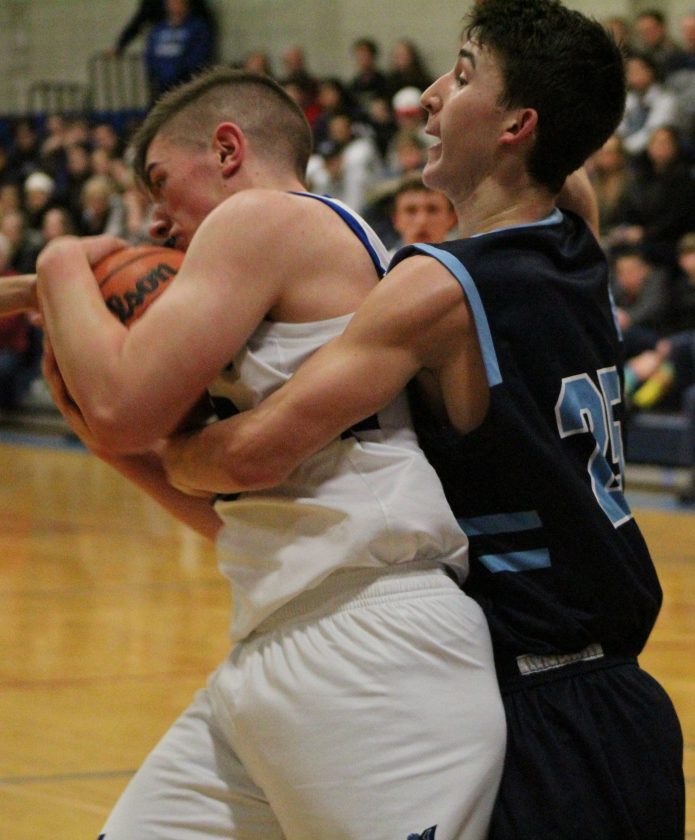 Telegraph photo by TOM KING Merrimack's Jack Tarleton gets tied up with the ball by Nashua North's Nathan Kane during Friday night's 37-32 North win in Merrimack.

MERRIMACK – He flew through the air, but it certainly wasn’t with the greatest of ease.

But Curtis Harris did time his jump perfectly, blocking Merrimack guard Adam Ellis’ attempt at a game-tying 3-pointer with four seconds left. That play and Nate Kane’s two free throws with 1.1 ticks remaining preserved the Titan win and knocked the Tomahawks (3-1) from the ranks of the unbeatens.

“We saw that they were 3-0, so if felt good,” said Harris, who had nine points. “Obviously to beat an undefeated team, and they’re one of our rivals, I guess you could say, for Division I.”

Oh, the ‘Hawks and Titans sure are rivals, as several of the athletes on the floor have battled in the football playoffs the last couple of years. The basketball last night certainly wasn’t pretty, but the competitive level was off the charts.

“Both teams played hard, both teams were physical, both teams shot a pretty low percentage,” North coach Steve Lane said. “It was right up Goody’s (Merrimack coach Tim Goodridge’s) ally as far as the Merrimack style. We tried to push it, tried to get the tempo up, but you’ve got to make little ones to make it happen. I thought the kids responded well in the second half.”

It was an uphill climb for the Titans, now 2-1, as they trailed at all the stops, 10-5 after one 21-19 at the half, and 27-25 after three. But Merrimack, which was very deliberate on offense, couldn’t pull away because of one main reason in Goodridge’s mind.

North took the lead for good on Gabe Buxton’s jumper, converting a nice Harris feed, 33-32 with 1:14 left. Then, after a turnover, the ‘Hawks committed a succession of fouls to force North to the line, and Buxton hit one of two to make it 34-32 with 32 ticks left.

Then came one of the plays Goodridge lamented, as Titan Connor Dunning (also with nine points) made a big steal with 12 seconds left and hit a free throw to make it 35-32.

That set up the heroics by Harris, as Merrimack came out of a timeout just beyond halfcourt with 7.9 seconds left.

“(Ellis) caught the ball, and I got tripped up,” Harris said. “I thought he was going to pull the two but he stepped back and tried (a shot) and I just blocked it.”

“Huge,” Lane said. “A big three by Dunning (at the start of the period), a nice steal by Connor, and Curtis with the big block. (The defense) certainly helped. Making a couple of big shots down the stretch certainly helped, too.”

Pat Yudkin had 11 and Ellis eight points to lead the Tomahawks.

“In fairness, (the Titans) played pretty darn good defense tonight, too,” Goodridge said. “That was probably one of the better basketball games that I’ve been involved in the last two or three years in terms of execution, the talent, and kids going at it, and playing hard.”

Again, nothing came easy and style points were few and far between, but North came away with a big early season win.