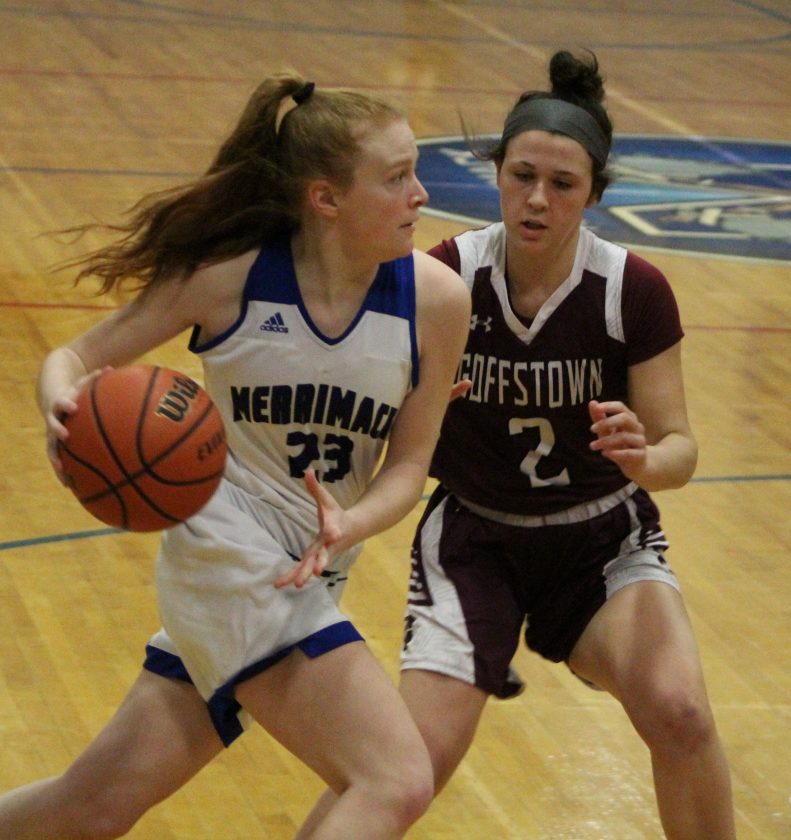 The Tomahawks were all over the floor defensively and on loose balls, rebounds, etc. on Thursday night as they turned a 32-27 deficit into a 61-42 win.

“That’s my team,” Tomahawks coach Mike Soucy said. “There’s no mystery to it. They just have so much grit and determination, it doesn’t matter whether we’re down or we’re up, they just continue to fight for 32 minutes and see what the score is at the end.”

No wonder this Tomahawk team is 4-0 in Division I and just won the Chick-fil-A Holiday Festival Tournament to boot. They visit Nashua North tonight.

“We just work really well together,” Tomahawks junior Theresa Twardosky said. “We’re passing the ball around, no one’s selfish on our team, it really helps a lot.”

Twardosky had 12 points while leading the way for the Tomahawks was sharpshooter Makenna Desfosses, each nailing three 3-pointers. Samantha Page had nine while sparkplugs Shannon Sadhwani and Riley Crampton added eight.

The ‘Hawks had a challenge, facing one of the top scorers in Division I, the Grizzlies’ Kelly Walsh. Walsh had just eight at the half with Merrimack up 25-21 and finsihed with 21 points, but was really a non factor.

“We did a good job containing her,” Soucy said, “but we didn’t do a good job shadowing her. I didn’t want her to catch the ball. But once she caught it, I’ve got such good defenders,whether it’s Riley Crampton, or Shannon Sadhwani or Emma Valluzzi, or Theresa Twardosky, I’ve got really good on-ball defenders, and she had to work for everything that she got.”

That’s the Merrimack way this year. The Grizzlies seemed overwhelmed by the tenacious Tomahawks.

“I think we wore them out a little bit,” Soucy said. “Having that full court press all game, it’s not only a physical thing, it’s a mental thing. (The opposition) gets fatigued that way. And we’re so used to playing that style, so we can play through it for 32 minutes. I think (Goffstown) struggled with that tonight.”

And by the looks of things, a few more teams likely will down the road.