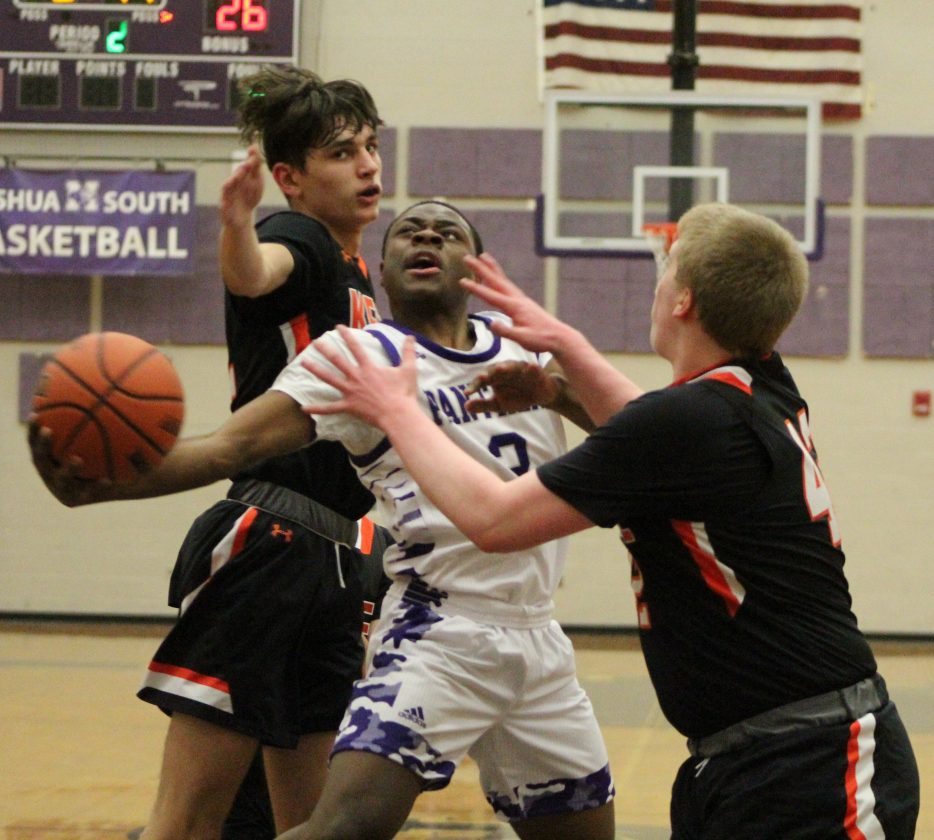 NASHUA – Throughout his playing and coaching career, Nashua High School South boys basketball mentor Nate Mazerolle has always been about one thing: Defense.

Thus, it was no surprise that after Keene scored 19 points in the first quarter Tuesday night, the Panthers were able to pretty much stifle the Blackbirds the rest of the way en route to a 66-56 win at the Belanger Gym.

It was South’s (1-2) first regular season triumph, and the key shutdown time came when after a 32-32 first half, they held Keene scoreless for the first 6:37 of the third period.

“We may have talked about (defense) at halftime a little bit,” Mazerolle said with a slight grin. “I’m sure every coach would say the same thing.

“It’s been a focal point, I keep telling them we’re not there yet defensively. We haven’t been scoring either – this is like a hundred for us – but a lot of our scoring comes off our defense.”

South looked sluggish early – heck, Mazerolle called a timeout less than a minute in when Keene jumped out to a 5-0 lead – and the ‘Birds (1-1) were up 28-23 late in the second quarter.

But something clicked, and a 9-0 run got the Panthers back in the game.

“Energy, everything was there,” Panthers guard Ivan Nyantenji, who had 15 points, 12 in the first half. “Our offense was moving, everything was working and clicking together. It was like family.”

There was more of the same all for one, one for all attitude in the third period.

“They played really hard,” Keene coach Kevin Ritter said. “We took some really quick shots on a couple of offensive possessions. They got hot, hit a lot of shots, and we went really cold in the third quarter. You miss shots it’s hard to win. All the credit to them.”

Keene didn’t score in the third until there was 1:23 left, the hoop coming on a Noah Timmer (13 points) layup. The ‘Birds Liam Johnston led all scorers with 18, while Andres Hulfachor led South with 16.

“Johnston is a player,” Mazerolle said. “We switched Jaden Murphy, who is arguably our best defender on him, and I think that made a huge difference. He’s a bulldog on defense.”

“We stunk the first two games,” Mazerolle said. “We’re maybe starting to figure it out.”

And figuring out that it starts with defense and goes from there – as always.