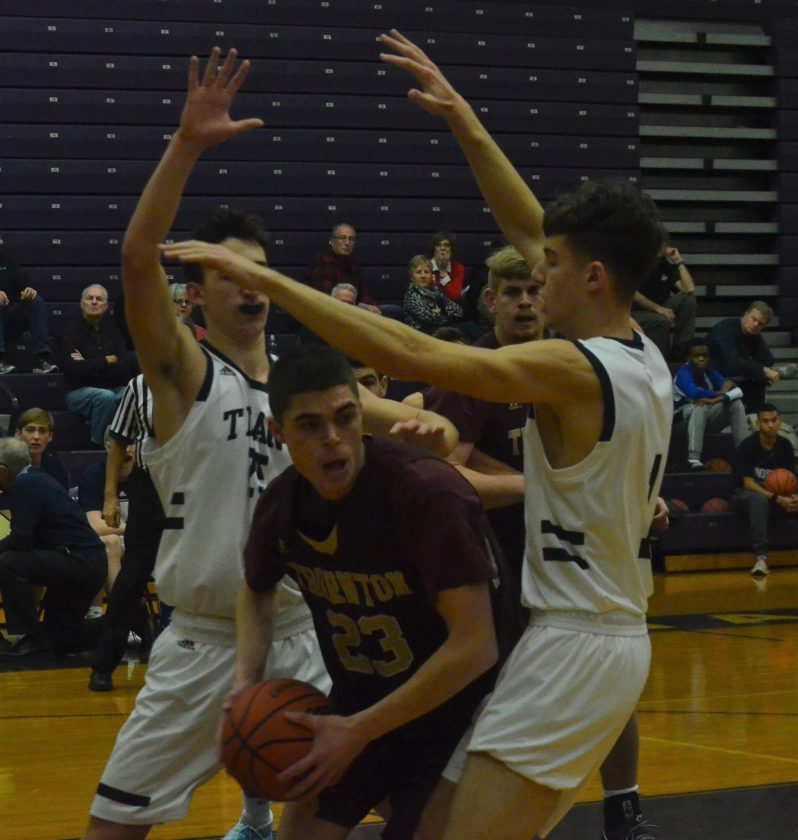 North players get defensive in the Chick-fil-A semifinals against Thornton Academy.

NASHUA – Nashua North was less than a minute away from a shot at Saturday’s Chick-fil-A Holiday Basketball Tournament finals, but that final minute proved to be one minute too many for the Titans.

North fell 43-40 to Thornton Academy in Friday’s first semi-final of the day despite leading for much of the contest.

Thornton only had one lead before William Mitchell put the Golden Trojans ahead for good with just under 20 seconds left in regulation, and that came in the game’s opening minutes. There, North responded to Thornton’s 6-0 opening salvo with a 25-13 run throughout the rest of the half.

North’s advantage peaked at 11 points thanks to a Connor Dunning three-pointer shortly before the half, with the Titans seeing their edge decrease down to just four points by the start of the fourth quarter.

North Head Coach Steve Lane felt that his squad looked pensive in the second half, something he believes fades away over the course of a season as a team gains composure and

The fact that his team only played two games coming into the tournament while their Saco, Maine-based opponents had played six may have played a small factor into the game’s

Jack Pyzinski led Thornton with 16 points, while teammate Dylan Griffin chipped in 11 points and 12 rebounds in the winning effort.

North’s Brenden Choate led all scorers with 20 points, including a perfect 7-for-7 day at the line.

In the other semifinal, Goffstown defeated Alvirne, 58-55.

Aidan O’Connell and Robenson Baguidy each had 15 points in the Grizzlies win, while Meshack Mugariri led the Broncos with 18 points.

Goffstown came into the tournament after only just five practices and no games together as a team.

“The boys’ compete level has been everything we could ask for,” said Goffstown Head Coach Ryan Cowette. “Robenson plays like he’s much older, he’s a calming presence for us that we didn’t have last year. It’s made a big

Goffstown now faces Thornton for the championship at 4:30 p.m. on Saturday afternoon.