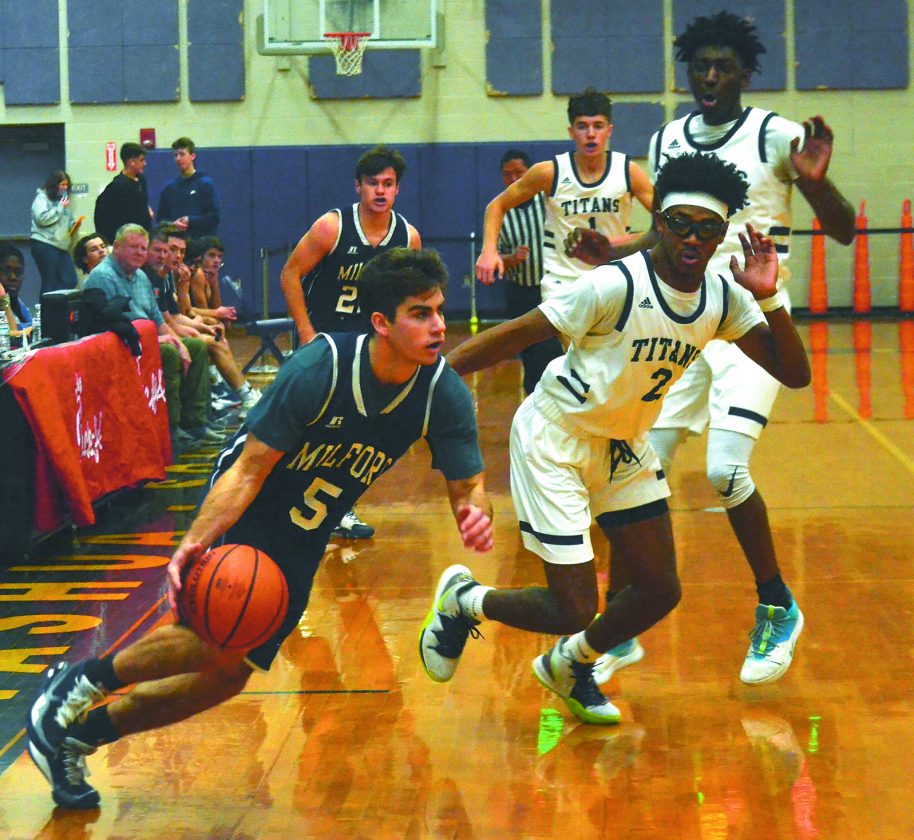 NASHUA – “And the stocking were hung by the baskets with care, with thoughts of the blowouts that would soon be there.”

The Chick-fil-A Holiday Basketball Tournament returned to Nashua South High School on Thursday with four first-round games, although the victors in three of those games were never really in any doubt.

Only the final game of the day, a 58-56 overtime win by Goffstown over the host Purple Panthers of South, held any real drama.

The Panthers hung around and managed to draw even with just over two minutes left in the third frame, but couldn’t creep ahead again, staying close with the visitors until a three from South’s Cody Rocheleau with 1:10 left knotted the contest at 51, enough to send the game beyond regulation.

Neither team could pull away in overtime either, but one final successful free throw by Goffstown’s TJ Dutton with just seconds left in the extra stanza put the Grizzlies over the finish line.

“It was just poor execution. We’re not very good right now and we have a long way to go, I’m glad we found that out during the Christmas Tournament and not when it really matters,” said South head coach Nate Mazerolle.

Rocheleau had 14 points for the Panthers, just behind the 15 from teammate Rhett Medling.

Goffstown’s Robenson Baguidy led all scorers with 21 points, with 10 of those points coming from the charity stripe.

The Panthers’ neighbors to the north side of the Nashua river advanced easily in the third game of the day, defeating Milford, 64-36. The Titans held just a 14-12 advantage after the first quarter of their game, but Nate Kane’s trio of three-pointers led Nashua North on what was a 23-9 run heading into the break.

Brenden Choate added 12 points in the third quarter alone to help put the game out of reach for good for North. Kane finished with 18 points to lead all scorers. Gavid Urda collected 14 points for Milford, including three-pointers in each quarter excluding the Titans’ second quarter run.

Payton Jones led the way for Thornton with 15 points, with the Tomahawks getting 16 points from Jack Tarleton in the losing effort.

Goffstown will face Alvirne in the other semifinal after the Broncos defeated Souhegan, 49-42.

Alvirne kept a manageable lead throughout the contest due in large part to their 22-for-28 day from the free-throw line compared to Souhegan’s six-point free-throw haul.

Matthew McCool had 14 points for the losing Sabers. Meshack Mugariri had 18 points for Alvirne, eight of which came from the line with teammate Jack DeWitt also converting eight free throws on his way to a 14-point performance.

Thornton and North will face off at 5 p.m., with Alvirne and Goffstown playing at 6:30, preceded by two consolation games.