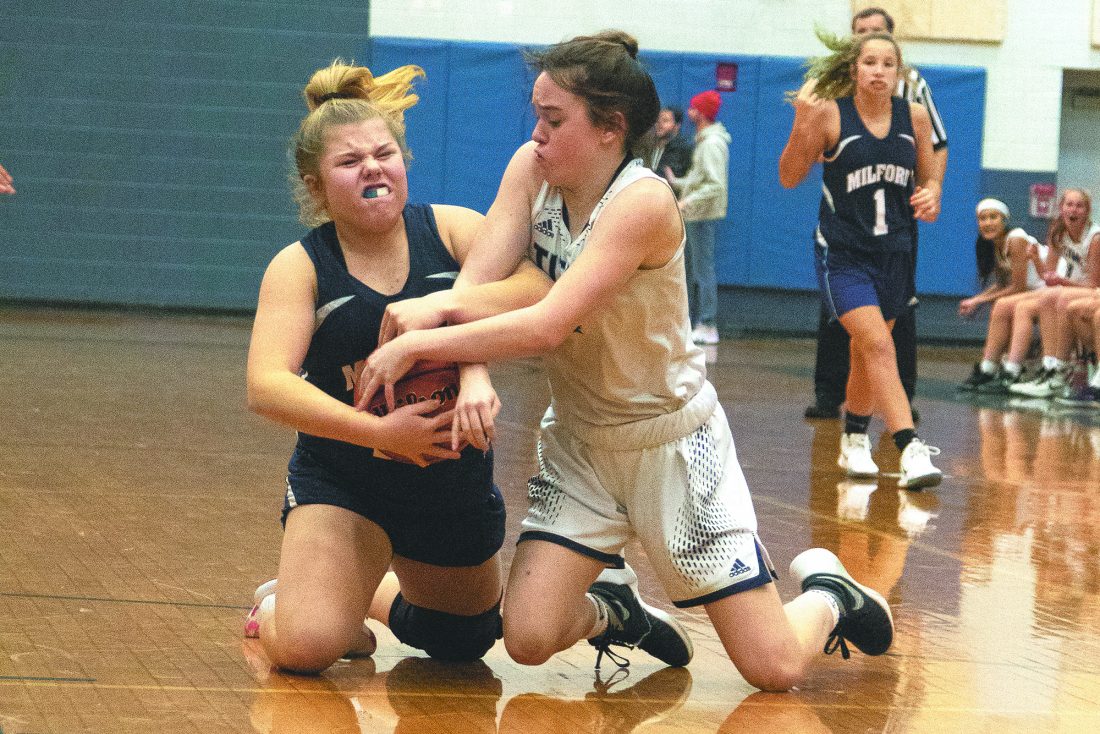 By MARC BRETON and MATHEW PLAMONDON

NASHUA – The Titans of Nashua North took every advantage they could on their home court hosting the Chick-fil-A Tournament. North had a hot start against the Milford Spartans, with quick offensive output and dominating defense.

Another team that had hot hand in the opening round was the Merrimack Tomahawks, who defeated Keene.

The two teams will face off in Round 2 today at 3:30 p.m. to see who will advance to the championship game, which is set for Saturday.

Milford and Keene will take the court at 9:30 a.m. in a consolation.

Nashua South took advantage of the Campbell’s slow start, jumping out early and ultimately holding the Cougars to 15 points.

Alvirne contended in the first game of the day against the Souhegan Sabers and came out the victors.

The Broncos will use their well-rested legs to try and defend the Panthers offense today at 2 p.m. and the winner will punch their ticket to the championship game.

With the losses, Campbell and Souhegan will matchup in the second round of consolation at 8 a.m.

Here’s a look at Thursday’s results:

With an 18 to 0 run to start the game, Nashua North’s girls’ basketball team, led by Sophomores Natalie Burgess and Olivia Mazerolle who scored 10 points apiece in the contest, won their tournament opening match-up over Milford.

The Titans took off with a fast start, opening with the aforementioned 18 straight points, only conceding a basket to Milford’s Addie Hopkins after keeping the Spartans off the board for the first six minutes of the game, helping them stretch the score to a 20 to 2 lead after the first quarter and the

North’s plan was to come out and start fast with the hope of knocking off any of the the rust that may have accumulated over the course of the holiday vacation, though to the common spectator, there was no rust to be seen.

“With two days off with Christmas break we wanted to go out an press and get as much rust off as fast as possible be aggressive and get as many layups as possible and get back up to game speed,” said the Titans head coach Curt Dutilley.

After scoring only seven points in the first half, Milford, who was led by Junior Jessie Gendron’s team high 9 points, was able to keep the game slightly more competitive through the second half with 27 of their 34 points in the third and fourth quarters combined, Outscoring North, who only scored 18 points in those frames.

The Tomahawks came out the victors after a dominating effort on both side of the floor. After a 19-13 halftime lead, Merrimack outscored the Blackbirds 18-4 to stretch out the lead. Theresa Twardosky led the team with nine points, Riley Crampton added eight points, Samantha Page and Heather Rohr scored six a piece. Shannon Sadhwani, Emma Valluzzi and Keira Bike were the tone setters on defense.

The Panthers led the Cougars from beginning to end to take the win. Iruka Obinelo and Kirsten McIntire scored 12 and 11 points respectively.

The Broncos take a 20 point win over the Sabers to advance in the tournament. Souhegan’s Halle VanBallegooyen led the team with eight points in the loss.