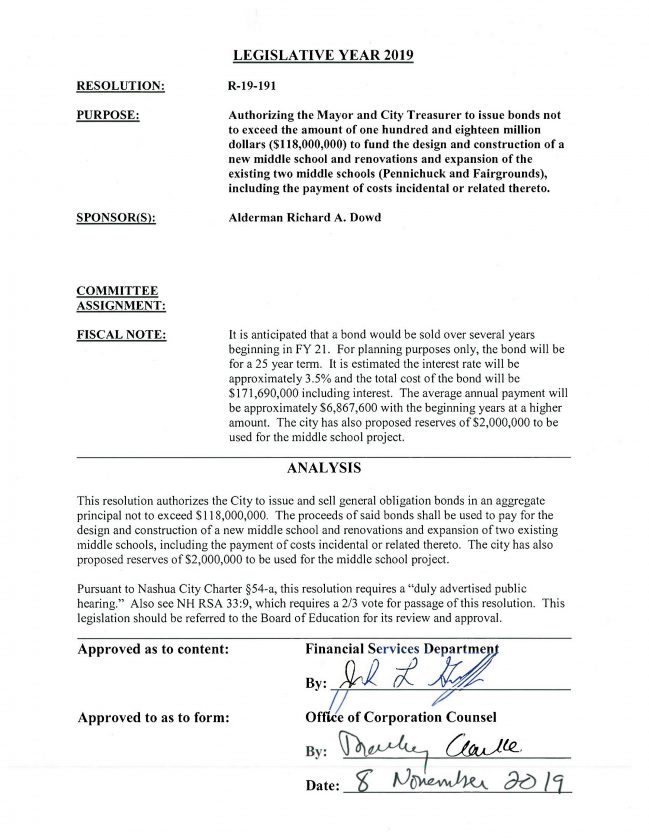 NASHUA – City leaders plan to spend $82 million in taxpayers’ money to construct a brand new middle school as a replacement for the current Elm Street Middle School, pending Board of Aldermen approval of a bond sale for such.

That doesn’t count interest, however. According to Resolution 19-191, the final cost of the city’s full middle school construction project “will be $171,690,000, including interest,” during a 25-year term.

A public hearing is set to discuss this project and at 7 p.m. Dec. 16 in the Aldermanic Chamber of Nashua City Hall, 229 Main St.

According to Resolution 19-191, Nashua officials plan to spend the following amounts on each school:

• $25 million for “Renovations of Pennichuck Middle School;” and

“Life span of said said buildings will be 30 years,” the resolution adds.

“For planning purposes only, the bond will be for a 25-year term. It is estimated the interest rate will be approximately 3.5% and the total cost of the bond will be $171,690,000, including interest,” the fiscal note on the legislation states.

Also on the agenda for the public hearing is Resolution 19-186, which aims to issue bonds in the amount of $1.5 million for various improvements at the Solid Waste Department Four Hills Landfill, and the purchase of two garbage trucks.

Also, Resolution 19-187 aims to issue bonds in the amount of $6 million for the design and construction of a Division of Public Works office facility.

The current administrative building on Riverside Street have been described as having “squalor-like conditions” and have not been maintained as they should have the last 25 years or so. Employees working in that building have outgrown the space, with files left out in the hallway because they lack storage space. Employees also work within cramped spaces, with the biggest problem at the moment being the facility’s air quality. Additionally, there has been issues with rodents.

Officials hope to have a new facility constructed at the Nashua Four Hills Landfill sometime in 2022. Meanwhile, the design and construction of this new facility costs $10 million, but $3.9 million of that price will be covered by the sale of 141-143 Burke St. That city owned property is being sold to Loyal Holdings LLC.