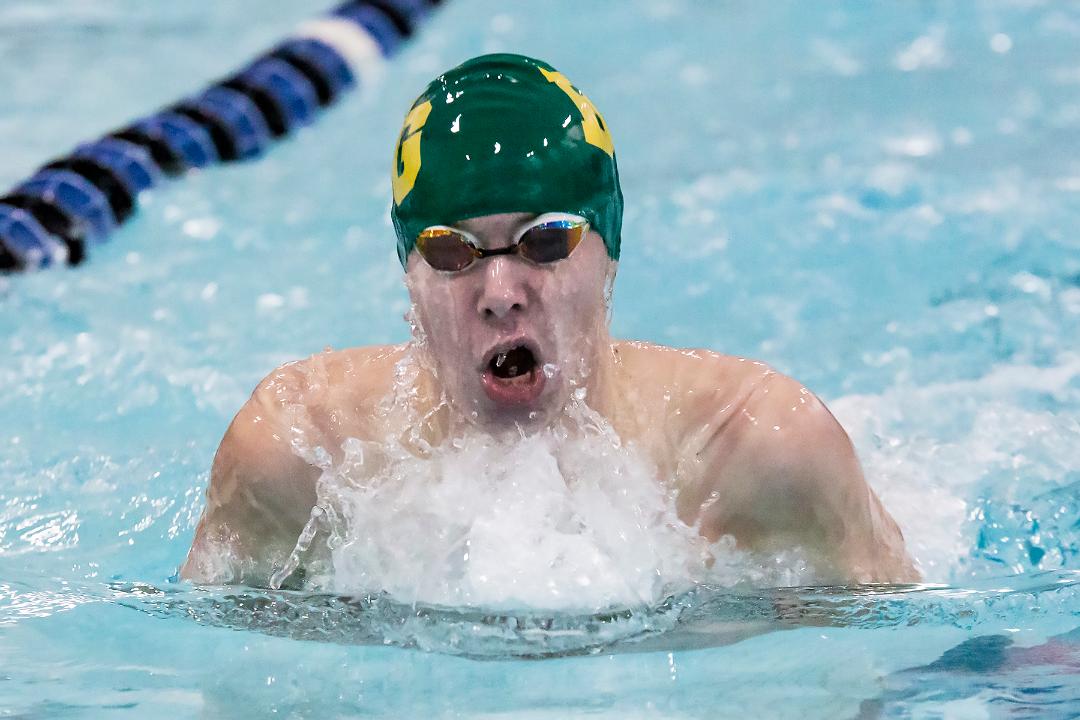 Photo courtesy of Bishop Guertin/Br. Ralph Lebel Connor Donoghue is one of the key returnees for Bishop Guertin in its pursuit of a Division I threepeat.

When it comes to high school swimming, is there really strength in numbers?

Bishop Guertin enters the season looking to defend consecutive Division I boys titles, but will do so with a small roster after graduation some talent.

“We lost a number of impact swimmers last year,” Cards coach Christine Rousseau said, “and replaced only a few of them. We’ll take a few hits during the regular season.”

But, Rousseau said, the Cards should have a strong showing in the Divsion I state meet in two months “with the small talented group we have.”

Keep an eye on Nashua North, which finished fifth in last year’s Division I meet and hopes to go even further this year.

“We’re looking to build on our best season in six years,” Titans coach Johan Massey said. “It will take a total team effort to reach our goals.”

Locally in Division II, it’s likely more about individual success, as Hanover has dominated both the boys and the girls in recent years. Milford will be bolstered by the return of defending 200 free champion Andrew Bartolomucci, a junior.

In the girls, Bishop Guertin has a nucleus of returnees from a team that finished third last year in a meet dominated by Exeter and Bedford. But keep an eye too on Nashua South, which finshed sixth in the girls meet last year and usually has a lot of depth. “We have a young team with a lot of potential,” Panthers coach Jenelle Dolan said.

Souhegan hopes to improve on last year’s ninth place finish in both boys and girls. Hollis Brookline finished 10th in the girls state meet last year and with several returnees could improve on that.

In Division I, Merrimack hopes to improve on last year’s eighth place finish in the boys and 11th in the girls. However, repeated attempts to get more specifics from the Tomahawks were not successful.

The season begins today with Nashua South and Alvirne competing, but most teams don’t start until next week, if not later. Here’s a capsule look:

COACH’S COMMENTS: “This group is extremely young but willing to learn,” McLaughlin said. “This will be a great rebuilding season for the Broncos.”

COACH’S COMMENTS: “We have a solid group of returning swimmers that will lead and guide the large number of new swimmers,” Rousseau said. “Looking forward to seeing them blend together as a team.”

COACH’S COMMENTS: “We believe hard work now yields fast results later,” Desmond said. “Our swimmers are successful both in and out of the water. We’re looking forward to a fast season.”

COACH’S COMMENTS: We, as coaches are very excited for the 2019-2020 season. We have a young team with a ton of potential.”

COACHES COMMENTS: “We are pleased with the number of returning swimmers and, combined with our newcomers we expect to be more competitive this year,” Ouellette said.

COACH’S COMMENTS: “As it normally is, our team is a balance between new swimmers, seasonal swimmers and year-round swimmers,” McManus said. “With a smaller team, we look at improvement from the beginning of the season until the end.”

COACH’S COMMENTS: We have more depth this year which will allow us to be more competitive.

COACH’S COMMENTS: “We have a very small but talented group,” McLaughlin said. “With finishing in top five in two of three relays at states last year, they’re hungry to improve on that. These boys are very motivated and driven to be successful.”

COACH’S COMMENTS: “We’ll take a few hits during the regular season,” Rousseau said, “but should do well at states with the small talented group we have.”

COACH’S COMMENTS: “I’ll be looking to our strong senior class and promising young talent to keep improving as a team,” Massey said.

COACH’S COMMENTS: “We as coaches are very excited for the season,” Dolan and Bryan said. “We have a young team with a ton of potential.”

COACH’S COMMENTS: “We work really hard,” McManus said, “and it’s fun to see the results at the end of the season.”

COACH’S COMMENTS: “We have more depth this year,” Thibodeau said, “which will allow us to be more competitive.”