Panthers get the win, Titans still get some satisfaction 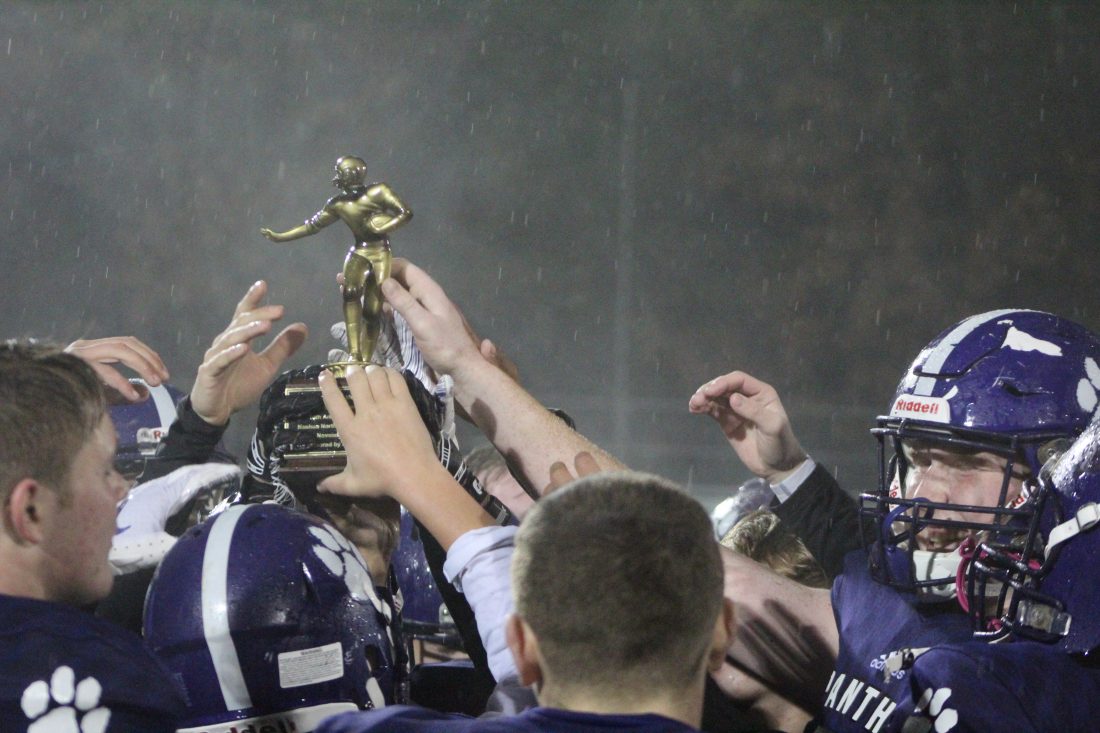 NASHUA – One team got to eat the main turkey course, but the other had a good helping of desert.

Another season is done and unlike recent past Turkey Bowls, both the Nashua High School North and South football teams left a soggy Stellos Stadium on Wednesday night each with a sense of satisfaction.

Yes, the Panthers prevailed in a 27-13 win, but it was far from the blowouts the last couple of years that sent the Titans into the off-season with a sour taste.

For the Panthers, they enjoyed a quick 13-0 first quarter start and also a 14-0 fourth quarter fininish. South sophomore running back Josh Compoh had all the confidence in the world his team would bounce back from seeing North rally to tie the 16th annual Turkey Bowl 13-all early in the fourth quarter

And he helped restore his own faith, as his 30-yard TD run with 7:32 left put the Panthers ahead for good, one of his three scores on the night.

“We didn’t want to lose,” said Compoh, who rushed for 166 yards on 21 carries. “We worked really hard to win this game after we lost to them in the regular season. We were just thinking we just have to do what we need to do to come back. … We were all super determined and super focused.”

It didn’t look as if the Panthers, who finish their season at 7-4, would have anything to worry about at all against the Titans as they jumped out to a 13-0 lead thanks to two North mistakes.

But they soon found out it wasn’t going to be that easy.

Still, the Panthers captured their fourth straight Turkey Eve Bowl, winning all the games since it was moved to a night affair. They lead the Thanksgiving series 12-4, and the overall series 21-12.

“I want to give (North) a lot of credit,” South coach Scott Knight said. “I thought their kids played really, really hard, and we were cautious at times.

“But I thought the kids responded well. … The thing is, the way we got out of the gate, I thought this could get ugly.”

Indeed, a shanked punt helped lead to a Josh Compoh 1-yard TD nearly three minutes in and a fumble recovery led to a Zakary Hureau 6-yard score with 6:32 left in the first quarter, and despite a blocked PAT kick, South led 13-0.

It looked like, with the Titans missing several players due to a season’s worth of injuries, including the talented Curtis Harris, that the Panthers could score 50-plus points in the game for the third year in a row.

But with five seconds left in the first half, Nicholls found Lucas Cunningham for a 15-yard TD catch, capping off an impressive nine play, 68-yard drive aided by a pass interference call.

That made it 13-7 at halftime, and late in the third quarter the Titans took advantage of a field position win and tied it up at 13 on Devin Bracetty’s 3-yard TD run.

“The kids played hard, they played physical, just like we did all year,” North coach Dante Laurendi said, his team ending up 9-2. “It wasn’t looking real good in the beginning, but we did a good job to overcome that and get back in the game.

But Cunningham, so good with his kicks all year, missed the PAT wide right, and the game stayed tied at 13.

“He’d been really good with extra points,” Josh Compoh said. “When he missed that, it was extremely relieving, and at that point it was, all right, time to win the game.”

After Compoh’s go-ahead TD run, he added a two-point conversion run to make it 21-13

And they did, with Compoh scoring a semi-meaningless TD on a 46 yard run with 28 seconds left. That came after North’s last drive stalled at the South 33 when Tyler Armeen tipped away a Nicholls fourth down pass attempt to Cunningham.

“A special group,” Knight said. “I’m glad they could finish on top.”