Time for The Fun Game to end the local football season 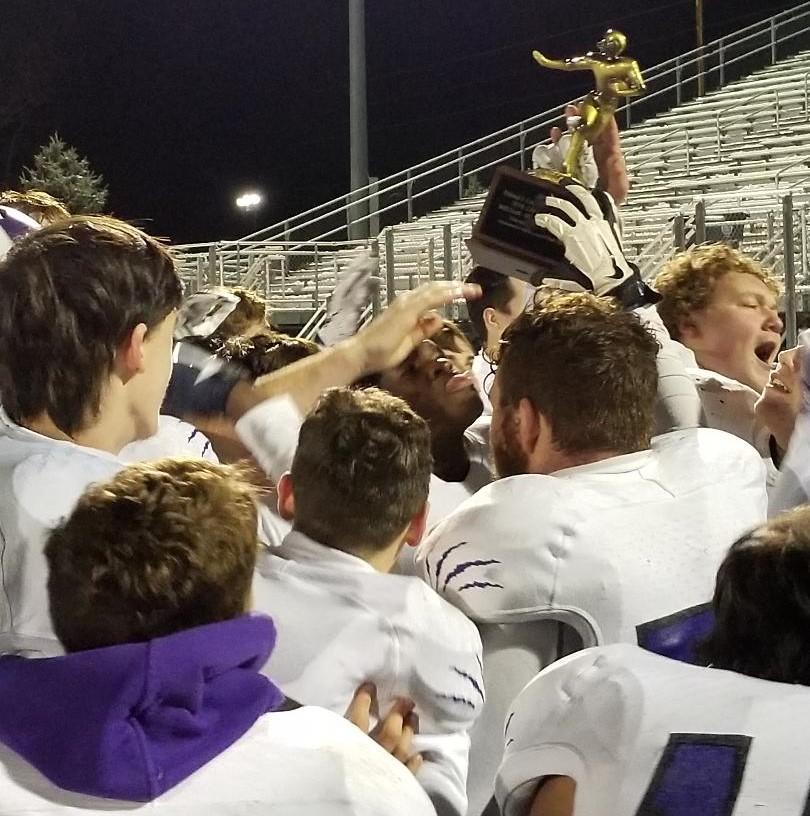 NASHUA – They call this The Fun Game.

Now it’s just a matter of going out and trying to beat a local rival and get a good start to the holiday season, plus perhaps set a tone for next year. It theoretically doesn’t have the pressure the early October West Conference showdown normally has.

But don’t think it’s meaningless. The Panthers have hoisted the Ed Lecius Memorial Trophy ever since the game was switched to Thanksgiving Eve three years ago by scores of 41-35 (2016), 55-21 (2017) and 52-26 (last year). Yes, the Titans have allowed 107 points in two straight Turkey Eve Bowls.

However, it’s certainly a sharp contrast to the regular season. North has won three of the last four, the last two by 21-14 and 21-6 counts. South leads the overall series 20-12, including 11-4 in Turkey Bowl games.

“Obviously, you play a game you want to win it,” North coach Dante Laurendi said. “In the past, the long break hasn’t helped us, we’ve had some casualties for different reasons coming into the games in the past.

“But it’s a fun game, a great opportunity for us to get our seniors into the game and let them have some fun and go play hard because they’ve worked really hard and have been great program kids for the last four years.

“This is a real good class as far as grades, and leadership, and behavior. It’s a great opportunity for these guys to have a blast one last time and play their rival South.”

The Panthers, meanwhile, went 6-3 in the regular season and lost to Exeter in the first round of the playoffs.

“As a coach, you’re back next year, but these kids aren’t,” South coach Scott Knight said, his team losing as many as 16 seniors. “I just wish we could’ve gone a little further.”

North goes into it as a likely underdog despite its 9-1 record, because the player that did the most damage in the October game, QB Curtis Harris, is out with a knee injury. Harris ran 16 times for 216 yards and three TDs on offense in that game, plus had an interception on defense. His 70-yard TD run with 2:12 left clinched the win for the eventual West Conference champion Titans.

“Yeah, when that kid gets past the second level, he’s gone,” Knight said.

Meanwhile, the Titans will likely face a different quarterback than the first meeting, won by North 21-6. An injury to sophomore Mike Rutstein put junior Chris Keefe behind center and he’s excelled.

“He just adds to the list of problems,” Laurendi said. “They, especially late, got him warmed up and he adds another element of speed in the backfield, how they played and finished the end of the year very strong, really running the ball really well. They weren’t just relying on one guy.

“And I think Keefe did a great job. He had a really great game in the (quarterfinal) against a tough Exeter team. He ran the ball well, he distributed the ball well to those outher kids. And the Compoh brothers (junior Jason, sophomore Josh) were pounding the ball well and running the ball hard.”

South this season established a tone Knight felt they didn’t have a year ago, and Laurendi has noticed it.

“They’re physical,” he said. “And they’ve play great defense all year. Obviously, it’s going to be a really great challenge.”

The Panthers can go either way. Some defenses, including North’s, have clamped down on them, as they’ve had four games scoring 14 points or less. But

For North, junior linebackers Justin Edwards and Spencer Whiting will be keys, as the defensive line led by junior Travis Holbrook. “They can do so much,” Laurendi said of the Panthers. “They can run inside on you with a bunch of guys or outside. So we just have to slow them down in areas of the run game, stop them in the early downs and put them in key (third down) positions. It’s going to be tough, because they’ve got an experienced group up front.”

The problem for North will be trying to score points without Harris. They’ve scored just two touchdowns since he suffered a sprained knee in the regular season win vs. Merrimack.

“We’re still trying to get used to it,” Laurendi said. “It obviously takes time when you go a full year with all your pieces in place. More time than a week or so to figure out what pieces should go where.”

With that in mind, Laurendi said he’d probably “play around with the quarterback position a little bit.” Look for the possibility of senior Sam Nicholls, normally a receiver, getting some snaps, along with sophomore Andy Barry.

“The good part about this game is we get a chance to move some pieces around, not only with our seniors but with some other guys. It gives us an early jump to get a look at next year, can we get guys at other positions, and find some help in positions we may be losing some guys at.”

Knight is worried about the Titans’ defense.

“Hey they limited us to six points,” he said. “They fly around on defense. But I think we’re a lot better team now. We left some points (on the field) in that game. But if you look at their scores, they’ve consistently played good defnse all year.”

How is South a better team?

“We’ve gotten better up front every week on the offensive line,” Knight said. “We’ve just steadily gotten better as the season’s gone on. And kids like Jason Compoh, he’s become a running back. A kid like (sophomore) Connor Rowsell, as a linebacker, has become a key player. He’s just exploded.”

But in a fun game like this, Knight always worries about the unexpected. Because his team has used the unexpected to its advantage.

And that’s what helps make the Turkey Eve Bowl the Fun Game.