South’s Buturla glad he was able to come back home 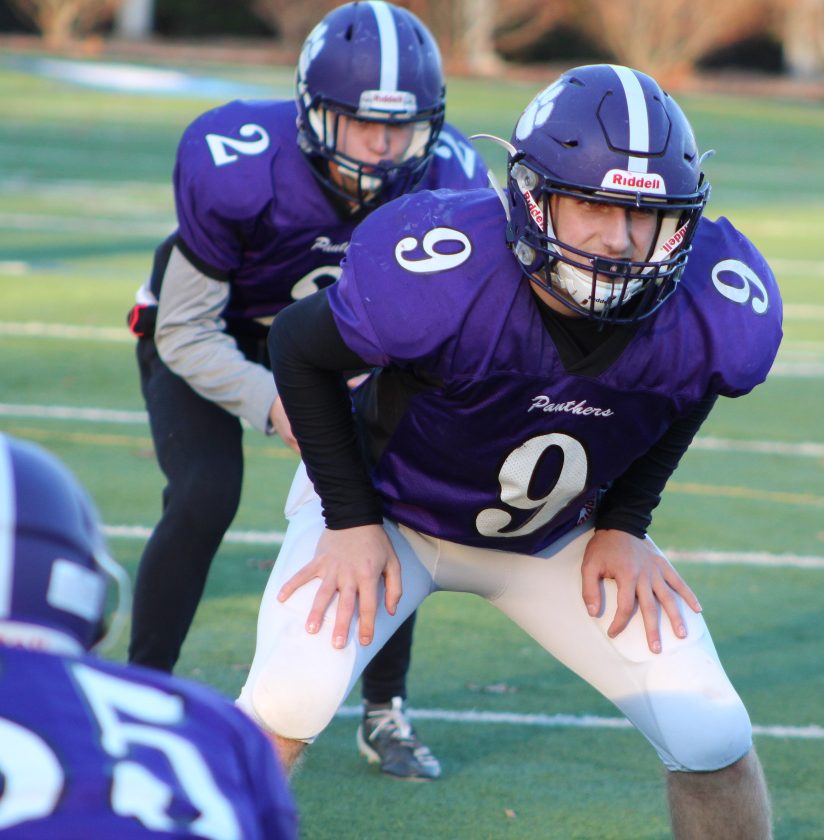 That was the feeling a little over two years ago when current Nashua High School South senior running back/linebacker Joe Buturla returned to the Panthers den after a year in Virgina.

“We had him in summer camp in the eighth grade, and we were pretty excited,” South coach Scott Knight said. “And then he moved. All we ever heard was, ‘You’re going to love this kid’. And then he was gone.”

Not to worry, though, Buturla’s father changed jobs again, and he was headed back to the area.

“I didn’t tell the coaches, but I told my friends,” said the Panther senior, who will likely be playing in his last football game on Wednesday night vs. Nashua North. “And I’m sure they told the coaches. I was super excited. I’ve been playing with these kids since third grade, so I was so excited to be playing with all my friends again. It was going to be a blast, and it has been.”

“He came back his sophomore year, and he’s played for us ever since,”Knight said, “which was awesome.”

Not only did Buturla miss playing for the Panthers, he missed football entirely. His family, due to a job change, moved to Milothian, Va, a distant suburb of Richmond, and he was enrolled at Cosby High School. But he missed the deadline for football tryouts.

But he did go to the Cosby games,and noticed a vast difference not as much on the playing field as in atmosphere.

“I think we could compete with them, that’s my honest opinon,” Buturla said. “The atmosphere was intense. A lot of the school participated in a lot of the way some schools in the northeast don’t. The entire school went (to games).”

But for Buturla, there’s been no place like home Buturla, who will likely play lacrosse, not football, in college, has been the Panthers’ bread and butter guy. He’s been a running back, a strong safety, and an inside linebacker, and has enjoyed it all.

“He had a real good winter in the weight room,” Knight said. “He’s one of those 400-plus squat kids. We moved him inside, we had some big shoes to fill and we thought he’d be the guy.

“I thought he played well. Switching from strong safety to inside backer is a transition.”

“They’re two different positions but they use the same athletic abilities,” Buturla said. “Linebacker is pretty straightforward, this is your job, this is what you’ve got to do. Safety is more ‘This is your job, but you have to react to how things play out.’ I love both, I don’t have a favorite.”

Buturla actually went back to safety for the playoff game vs. Exeter, after sitting out the regular season finale due to a few minor injuries. “That was tough,” he said. “You know you can play, but it’s for the best. It’s the worst feeling.”

On offense, Buturla also gets tough yards in a pinch when the Panthers want to deviate from Jason and Josh Compoh.

“He probably sees the ball running zone probably better than anybody we have,” Knight said. “He’s just a real coachable kid. If you tell him, if you see this pre-snap, your pre-snap read is to do this, he does it, because he’s a smart player.

“He’s played a lot of football, does all the things you’re supposed to do. Good student, good lacrosse player.”

“As a sophomore, I couldn’t do it as well,” Buturla said of his zone read ability. “But going into my junior year, Coach Monsen (South assistant Bill) really pushed me to keep my shoulders square to the line, and read the entire line. Ever since then I’ve just focused on that, you can see the entire line, see the cutbacks.”

He opted for lacrosse, which he’s been playing since the fifth grade – he made the switch from baseball because “It was more on the go” for college, where he’d like to study business/finance. It’s just a question of where. He’s begun to look at Plymouth and Keene State as possibilities.

But when the buzzer sounds Wednesday night, football ends for a pretty steady player.