Tomahawks can’t get untracked at Exeter in semis loss 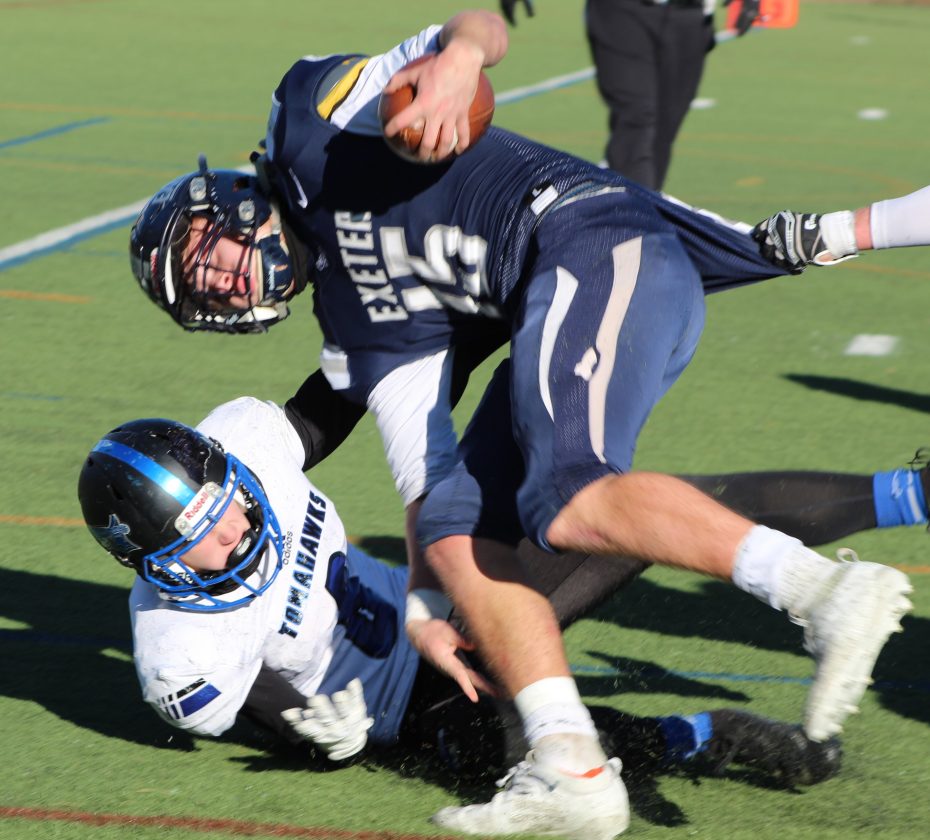 Telegraph photo by TOM KING Merrimack's Justin Fournier (8) tries to tackle Exeter's Jaedon Cliche, who is also being pulled from behind, during the Blue Hawks' 34-14 Divison I semfinal win Saturday in Exeter.

EXETER – There’s always an adjustment period when you have to play the Exeter High School football team.

You just had better not let it last too long, or fall too far behind. Unfortunately the Merrimack Tomahawks did both in Saturday’s 34-14 Divison I semifinal loss at the hands of the Blue Hawks at Bill Ball Stadium.

“They’re very good, they’re very fast, they hit us quickly, and I don’t think we were ready for it at first,” Merrimack two-way senior standout Jared Dyer said. “We gradually got into it, but I think it was a little too late at that point.”

The 10-1 Blue Hawks, seeded second in the East-West cluster, scored on their first possession on a surprise 50-yard pass play, and then racked up a couple of other TDs to go into the half up 21-0, and were in control.

“I thought we moved the ball well,” said Exeter coach Bill Ball, whose team will face Londonderry next Sunday in the Division I finals at 6 p.m. at the University of New Hampshire. “They’re (Merrimack) tough. … It’s great to be moving on.”

For the Tomahawks, it was a tough blow, their third semifinal defeat in the last four seasons. It began in tough fashion when Exeter’s Ryan Grijalva hit Nate MacDonald on a 50-yard TD pass not even three minutes in to put the Blue Hawks up 7-0.

“We needed a quick start and they ended up getting a quick start,” Tomahawks coach Kip Jackson said. “They did a really good job on money downs and we didn’t, on both sides of the ball. That kind of put us behind by three touchdowns.”

“It really set the tone for them,” Dyer said. “I thought they did a great job capitalizing on it, capitalizing on the play, the mistake that we made. I think think they did that for most of the game, and that’s why they came out on top.”

Yes, Exeter,which amassed 397 total yards on the day, didn’t stop with that surprise TD pass. On their second possession, the Blue Hawks put together a nine play, 76-yard march, all on the ground, with Derek Edmiston bursting threw the line for a 22-yard TD.

And in the second quarter, the Tomahawks committed another no-no in the book of what not to do vs. Exeter, a tipped interception into the hands of Sean Collins setting up the Blue Hawks at the Merrimack 36 midway through the second quarter. Exeter back Jaedon Cliche scored on a 10-yard run with 6:41 left in the half to help make it 21-0. Cliche finished with 177 yards on 20 carries.

Merrimack, which managed just 52 total yards in the first half, came out firing on all cylinders in the second half, QB Kyle Crampton (15 of 26 for 178 yards) engineering a 12-play, 71-yard scoring march that ended with an 11-yard fourth down TD pass to Dyer.

“We had a lot of momentum at that point in time,” Jackson said. “The problem was we didn’t get a stop on the next series to get the ball back and perhaps put them on their heels a little bit. But they’ve been doing it for awhile, that’s why they’ve got a good program.”

Jackson was referring to Cliche’s 68 yard run from scrimmage on the first play of Exeter’s next series, down to the Merrimack 5. Three plays later Grijalva plunged in from less than a yard out, and after the PAT it was 28-7 with 6:26 left in the third.

That pretty much did it. The teams traded late scores as Cliche would later catch a 9-yard TD pass while Merrimack’s Zach Twardosky had a 5-yard TD to account for the final.

“They played a much cleaner game,” Jackson said of Exeter. “On defense we gave up the big plays, and on offense we couldn’t sustain a drive. … We’ll have to try to reload, like good programs do.”