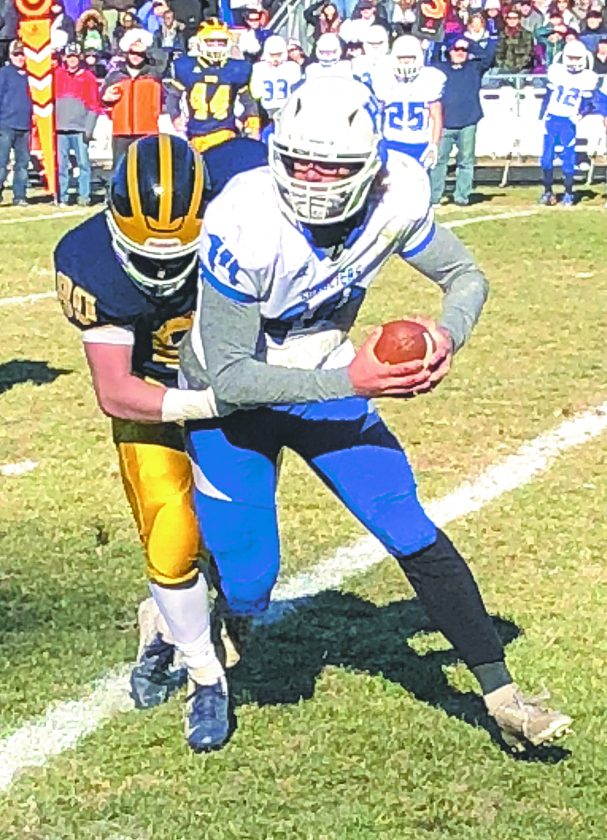 Photo by CHRIS PANTAZIS Although the Bow defense was able to wrap up Hollis-Brookline quarterback Sander Wimmer on this play, the Cavaliers’ star ran for more than 100 yards in his team’s semifinal playoff thumping of the Falcons on Saturday.

By HECTOR LONGO and TOM KING

And then there was one.

Once again, there won’t be a local in the Division I finals next Sunday at the University of New Hampshire’s Wildcat Stadium.

But lo and behold, for the second straight season the area will have a Division II finalist, as Hollis Brookline and its dynamic offense will take a six game winning streak into the title game against No. 6 Plymouth, which has won seven in a row, thanks in part to a staunch defense.

Campbell in Division III was eliminated a week ago. And for the locals in Division I, three made the playoffs – Nashua North, South, and Merrimack – and the Tomahawks bowed out at Exeter in Saturday’s semis.

As pretty as the Hollis Brookline passing game can be, you don’t often win pretty in November, not with 25 mile-per-hour winds and 25-degree temps.

The 2019 Cavs certainly flaunted their versatility on Saturday, knocking off previously unbeaten Bow.

Balance was the key to the day as 100-yard rushers Sander Wimmer and Marc-Andre Thermitus sparked a 270-yard rushing attack, while Wimmer threw for 201 yards as well.

“It was mainly the wind, and we had the lead,” said HB coach Chris Lones about the run-first attack. “In the first half we felt we could get outside on them, running our stretch stuff. We got their big guys moving laterally, and they wore down inside. Then the wind picked up and I didn’t want to take any chances.

“Our offensive line played really well. We were undersized but quick enough to get into them.”

Talk about a gritty performance.

Linemen Quinn Connors, Sal Fabbio, Adam Slater, Austin Etchells and John Rutledge all start on both sides of the ball.

“None of those kids wanted to come off the field,” said Lones. “Marc had a phenomenal game. Sander had his usual game.

“We have multiple go-to guys. It’s harder for the defense too key on one guy, because if you do, four others can beat you.”

If you are looking ahead to Sunday’s title game against Plymouth, remember that UNH is artificial turf so regardless of the weather, the footing will be fine.

The Tomahawks, as head coach Kip Jackson said, will try to “reload, like good programs do.”

But there is a long list of players who have impacted things over the last couple of seasons that after graduation this spring will leave that cupboard a bit empty – players like Jared Dyer, Devin Wood, James Dowling, Cole Camberlain, Zach Twardosky, Eric Griffin, etc.

“I think our legacy will be left,” Dyer said. “Our class is actually the winningest that we’ve had in football in our school’s history. I’m hoping that kids step up and follow in the future.”

“We’re losing a lot with Jared, as well as Devin, and James, and Zach, the list goes on and on,” Jackson said. “This is a real good senior class from top to bottom, not just what they do on the field, but the type of leaders they are – you can see them going around hugging people, making sure the others are OK. We’re going to miss them.”

On Saturday, Merrimack missed Dowling, who was the ‘Hawks quarterback the last couple of seasons, but also an effective running back at times and very good defensive back. He injured his ankle at the end of last week’s quarterfinal win over North.

“Oh yeah, definitely,” Jackson said. “On both sides of the ball, whether it be on offense at quarterback or playing slot, as well as on defense, he would’ve been one of the perimeter guys. And Twardosky would’ve been playing back (in the secondary) instead of having to fill in and having to play out of position. But that’s definitely not why we lost.”

There are a couple of key offensive players coming back, as QB Kyle Crampton is a sophomore this year and back Jake Trahan a junior.

“Down the road, I have to go back and regroup and figure out what we have coming back in the program,” Jackson said. “It’s tough. … It’s obviously a challenge. Football’s a lot easier when you have really good players, and hopefully we continue to develop some.”

With the Broncos’ loss at Plymouth on Saturday, coach Tarek Rothe has to say goodbye to 27 seniors, a very special class of kids.

The coach got a bit emotional in the twilight after the loss.

“I was their freshmen coach back four years ago,” said Rothe. “It’s just an unbelievable group. They stuck with it and stuck together. They’ve helped this program turn the corner.

“As freshmen, you could see the potential in the group. It really was something special. They got in the weight room and they stayed with it. Their dedication was just tremendous.”