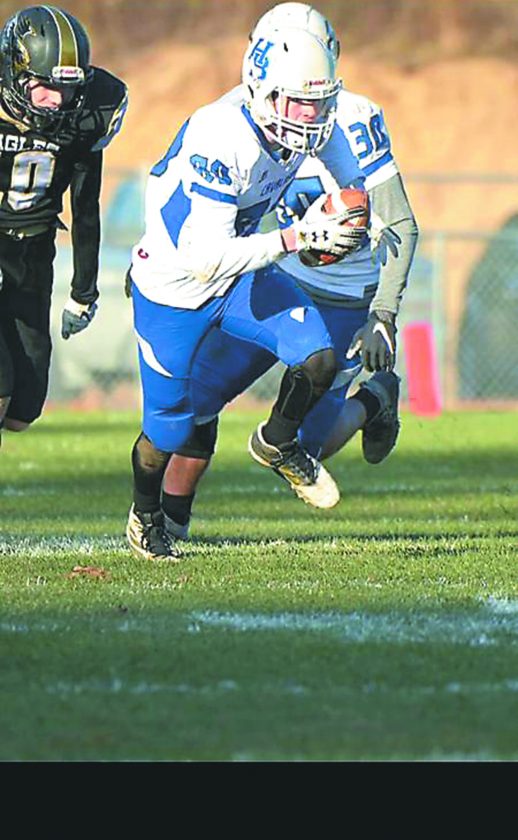 Blake Bergerson is one of the top targets for Hollis Brookline QB Sander Wimmer in Saturday's state semifinal at Bow.

HOLLIS – So how long does it take a seasoned, sizzling high school quarterback to trust a fresh, new, raw wide receiver?

Frustration bubbled at the break. Trailing 28-0 with all-state sensation Quinten Wimmer out with a knee injury, you could expect that.

“I don’t think I had a catch,” said Bergerson, who as a sophomore saw snaps here or there with no stats to speak of. “I remember walking off the field at halftime and one of the officials told me I should say something because I was open a lot.”

Sander Wimmer has been around for a while. With no “Q,” he needed more than AJ Johnson as a target. And the rest as they say is history.

Bergerson went on to catch six balls in the second half of the 35-21 loss for 173 yards and a pair of touchdowns.

“The receivers had to fill in. He’s such a huge part of our offense,” said Bergerson of Quinten, who came back after three games and has again put up serious monster numbers with 44 catches for 786 yards in seven games. “Him going down made me mature quickly and step up. It made Sander trust me more quickly. We had to adjust. We had to adapt. I guess I did.”

“I didn’t expect to be this big a part of it,” said Bergerson, who also starts at cornerback for the defense.

“Before the season, I had a goal to be in the top 10 in receiving yardage in Division II.”

“Our whole offense is close,” said Bergerson. “We went through a lot of things this year, losing ‘Q’ early and losing a coach. We just have worked so hard and so well together.”

Of course, it begins with Wimmer, a point the junior Bergerson knows all too well.

“His ability to make all those throws … Not a whole lot of quarterbacks can see the whole field and make the passes he makes,” he said.

Bergerson says he has played football 10 or 11 yards. And while he plays varsity lacrosse and saw time on a solid Cavaliers JV hoop team last winter, this is the sport he loves most.

It certainly has shown on the field.

“I’ve learned so much from the experience of playing this game,” Bergerson said.