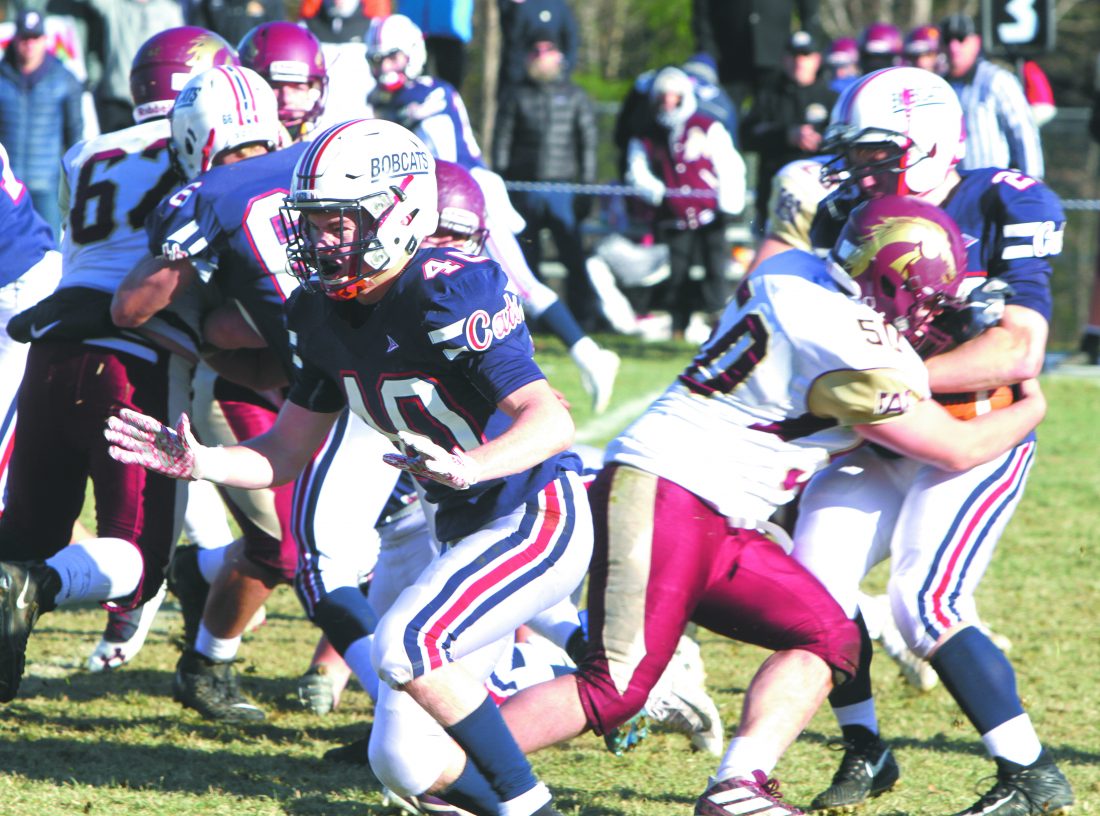 PLYMOUTH – As comfortable, and let’s face it, as good as this Alvirne High football team has played without the lead, Plymouth High is the consummate front-runner.

The three-time defending Division II state champs grab leads and protect them better than anyone and that formula played out here on Saturday in the state semifinals.

Plymouth built a 14-0 lead before the Broncos had their first, first-down and held off a character-laden Alvirne bunch in a classic chiller, 14-7. Sixth-seeded Plymouth shoots for its fourth straight state title on Sunday (2:30 p.m.) at UNH against No. 5

“Just a really tough start for us, and their kids have been doing what they do for decades,” said coach Tarek Rothe, whose seventh-seeded Broncos finish up at 7-4, one score short of a return trip to the title game. “They’re well-coached. And their kids never get too high or too low. They maintain a level.”

Alvirne had its chances to tie or potentially lead in the second half.

Twice, Plymouth turned the Broncos, who trailed 14-7 at the intermission, away.

First, after Alvirne had chewed up the first eight minutes of the third quarter, Kyle Gora found Ayvion Prak in the flat on fourth-and-goal from

Prak fought and twisted but the Bobcats held,

spilling him at the 1.

And then in the fourth, Gora clicked twice on fourth down passes, one to Dylan Bliss and another to Grady Hudson, as Alvirne moved to the Plymouth 24.

But the champs again showed their mettle, and Alvirne would give up the rock with 90 seconds to play for the last time.

Plymouth was ready from the opening snap.

Being on their own field, ringed by snow and temps in the 20s, it seemed to suit the boys from ski country.

That margin doubled in the second quarter when Cody Bannon scooted in from the 4, making it 14-0.

Alvirne still slumbered, but a big combined stick on defense between Mitch Dobek and Thomas Keegan seemed to stir things on the visitors’ sideline.

The Broncos finally moved the chains with 4:42 left in the half and came up with a huge play, a 7-yard halfback pop pass from Alex Giuffrida to Paul Manzi on fourth-and-goal from the 7 with just nine seconds left in the half.

Kory Couilliard’s PAT kick cut the margin to 14-7 at the break, with the Broncos receiving the opening kick of the third quarter.

But both defenses pitched shutouts in the second half, despite Alvirne carrying the play. And the damage was done. The Bobcats, who edged Pelham in the quarters, made 14 points work for the second straight week.

“They had a good scheme and a good plan,” said Rothe. “We had our chances, but we just got behind the chains a couple times, and you can’t do that against a team like that.”