Tomahawks face a stiff challenge vs. Exeter in semis 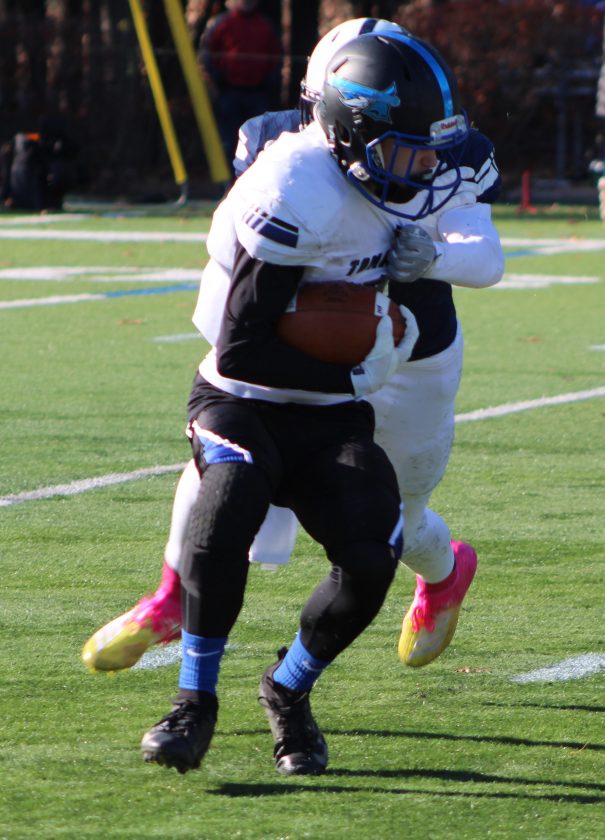 They are knocking on the door again.

Yes, the Merrimack High School football team is back in the Division I semifinals for the third time in four seasons under head coach Kip Jackson.

The problem is, that door is pretty solid, and the Tomahawks may need to use a battering ram to bang it down as they are facing a No. 2, 9-1 Exeter team Saturday that rarely loses postseason games at Bill Ball Stadium.

And an Exeter team that blew by the Tomahawks 41-7 in the season’s third game, handing Merrimack its first loss after a 2-0 start.

“We have to coach better and we have play better,” Merrimack coach Kip Jackson, his team now 7-3, said. “It’s pretty simple, they beat us in every phase of the game. It wasn’t pretty, it wasn’t good, but I think we’ve gotten better since that game,and we’ll see how much when we play them.”

What about this Exeter team? The Blue Hawks finished 4-5 last year and out of the playoffs. Ball said a couple of weeks ago that the team/program “did something about it”, and that meant more of an intense focus, especially in the off-season.

“They play with a purpose,they’re physical,” Jackson said. “It’s Exeter football. It’s everything you expect when you go there. He has great kids, and they do a great job preparing them for every single opponent.

“They do a great job of game-planning and putting their kids in a position to be successful. I’ve talked to Coach Ball, and they had a great off-season, they were ready to go this year and it shows.”

The Blue Hawks have been bouyed by a pair of first-year varsity backs, senior Jaedon Cliche and Derek Edmiston, who didn’t have full time roles a year ago. All they did was combine to rush for an astounding 402 yards vs. Nashua South in the quarters. Yes, you read that right.

“Edmiston is a tough, hard-nosed runner, and Cliche has had a tremendous year,” Ball said. “And they’re first-year varsity players.”

Ball knows that in more ways than not, he can take the regular season game vs. Merrimack and toss it. His team was pretty dominant at Stellos Stadium two weeks ago aganst Nashua South in the regular season finale but found itself in a battle royal in the quarters at home.

“I don’t think we played very well on the edge defensively,” Ball said, noting how South had 100 yards rushers in Jason Compoh and Chris Keefe. “That’s certainly a concern for us moving forward. Hopefully we’ll have corrected that (by Saturday).”

Ball knows the deal, the Tomahawks can beat you on the edge with backs Zach Twardosky and Jake Trahan, and Dowling if he’s healthy.

“They’re well balanced with Dyer and a perimeter guy like Twardosky, he’s tough,” Ball said. “And Wood and Dyer, especially in the pass game, it’s tough to contend with those two guys. And they’re tough up front, with guys like (lineman Cole) Chamberlain.”

Jackson isn’t concerned with how the Tomahawks do it, he just knows they have to put up the points. Sometimes it’s almost a curse as much as a blessing to score quickly against the Blue Hawks, because they control the ball so much.

“I don’t think we care how we score,” Jackson said. “One play, or 15 plays, it doesn’t really matter for us. I think Coach Ball feels the same way.”

The Tomahawks have a team that fits what Jackson has built – good, tough players who carry themselves well on and off the field.

“Some of those kids either they played varsity as sophomores, or played a little bit as sophomores,” Jackson said. “But they definitely learned from the adversity we dealt with a couple of years ago as well as the seniors we had last year.

“Something we talk about is your legacy isn’t just your year, your senior year, it’s what you left behind. The kids behind, they were great leaders and I think it shows in how our kids lead this year.”

Merrimck will likely start sophomore Kyle Crampton at quarterback, in part because he’s played well and also becauseusual senior starting QB James Dowling has been effective in other roles. And because Dowling may be unable to play or limited due to ankle injuries.

That would also mean more reliance on back/end Jake Trahan, who caught two TD passes vs. Nashua and had a long run from scrimmage late.

“It’s been a few weeks building,” Jackson said. “He’s just a kid that had a really good off-season. I’m glad we can point to him as kid that between his sophomore and junior years he worked hard and you see the results on the field.”

And, as far as results go, Jackson and the Tomahawks hope their third time in the semis over the last four years will be the charm.