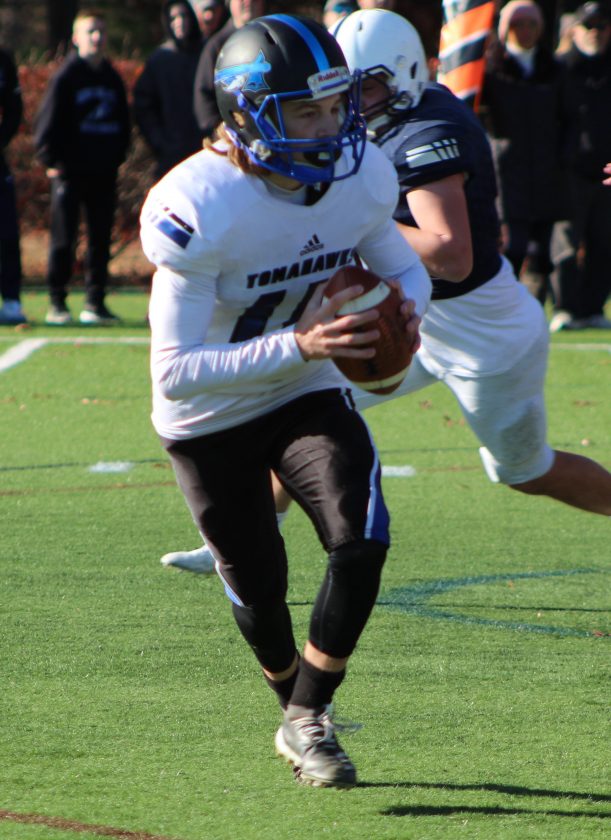 Telegraph photo by TOM KING Sophomore Kyle Crampton is likely to be Merrimack's starting quarterback this Saturday in the Division I semifinals vs. Exeter.

He was learning his craft. As a sophomore, knowing that Merrimack’s James Dowling is in his last year as the Tomahawks signal caller as a senior, he pointed to his junior year. That would be his time.

“Junior year, I was getting ready for it, and that would be my real time,” he said.

Crampton’s timetable has turned up, as he’ll likely be the starting varsity QB for the Tomahawks going into Saturday’s Division I semifinal vs. Exeter at the Blue Hawks’ Bill Ball Stadium. This past Saturday he threw two big TD passes in Merrimack’s quarterfinal win over Nashua North.

“Oh, no, no, I was ready for JV quarterback,” Crampton said, when asked if he ever envisioned such a scenario. “I was happy about that, ready to play JV. And that’s what I did.”

What changed? A few things, not the least of have been injuries to both of Dowling’s ankles. But Merrimack coach Kip Jackson wanted to unleash the athletic Dowling on the opposition both as a running back and wideout, and also spell him on offense so he could help out on defense.

So why not go with Crampton at times at QB? After all, he had shown he was capable both in JV games and in practice.

Thus, after the Tomahawks’ loss to Nashua South earlier in the season, they decided to add a few wrinkles, and one of them was Crampton. The pair would share the position during a game.

“We wanted to have another athlete on the field, as in James,” Merrimack coach Kip Jackson said. “As well as get a few others off the field, like Jared (tight end/defensive end Dyer). And that just allows us to divvy up the playing time, because a lot of them play both sides of the ball. It’s not like last year, when we had a lot of depth.”

And Crampton showed in practice he could do it.

“Most definitely,” Jackson said. “He throws the ball in really good spots. … It was like ‘Wow, now I have to play with the big boys. But he’s done a good job.

“It’s interesting, because James is actually the opposite (in demeanor) James is very emotional, and Kyle isn’t. It’s good to have the two different personalities.”

“He’s kind of a flatliner in terms of he really doesn’t show a lot of emotion,” Jackson said. “Doesn’t really get too high, doesn’t get to low. For a kid who’s a sophomore, that’s really impressive.”

It’s been a big season for sophomores. Mike Rutstein started at Nashua South before his hip injury. Josh Compoh and Connor Rowsell are other Panthers who have been keys.

“I think if they can mentally process things, as well as emotionally deal with failure and overcome adversity, they’ll be fine,” Jackson said. “I don’t think moments get to big for him, which is a good thing.

“I’m looking forward to seeing how he grows over the next two years.”

Indeed, Crampton doesn’t let things bother him, because the game is still football, whether it be varsity or JV.

“It felt like a regular game,” he said of his first varsity appearance. “I go into games thinking that it’s just a regular game, not varsity, JV. I just go into it thinking it’s a regular football game, regular day, nothing special.”

And Crampton has received the support of the more experienced players around him, such as Dyer, wideout Devin Wood, junior Jake Trahan, etc.

“Oh yeah, for sure,”Crampton said. “They tell me if they’re open, and if they see something, I look at it next time. They know a lot more than I do. I trust them.”

“It easier to be a quarterback when you have kids like Jared and Devin to throw the ball too,” Jackson said. “You don’t have to be the most accurate. If you throw the ball up, they’re going to get it.”

The key? His Tomahawk teammates have complete faith in him.

Crampton was upset to see Dowling on crutches leaving Stellos Stadium last Saturday. The two have worked well together.

“That’s a major loss for sure,” Crampton said. “He’s also a real good player on defense. I’m going to have to step up my game way more than I have been.”

But just imagine the experience Crampton is getting, because the Tomahawks know they have their QB of the future.

“It’s going to help me out a lot,” Crampton said. “Knowing the vibes of a Friday night and knowing the pressure that goes on during it.”

“I was excited,” he said when asked about last weekend’s quarterfinal vs. North. “I was ready. And then after the game, now I’m excited we get another game.”

There should be a lot of games in Kyle Crampton’s future, that’s for sure.