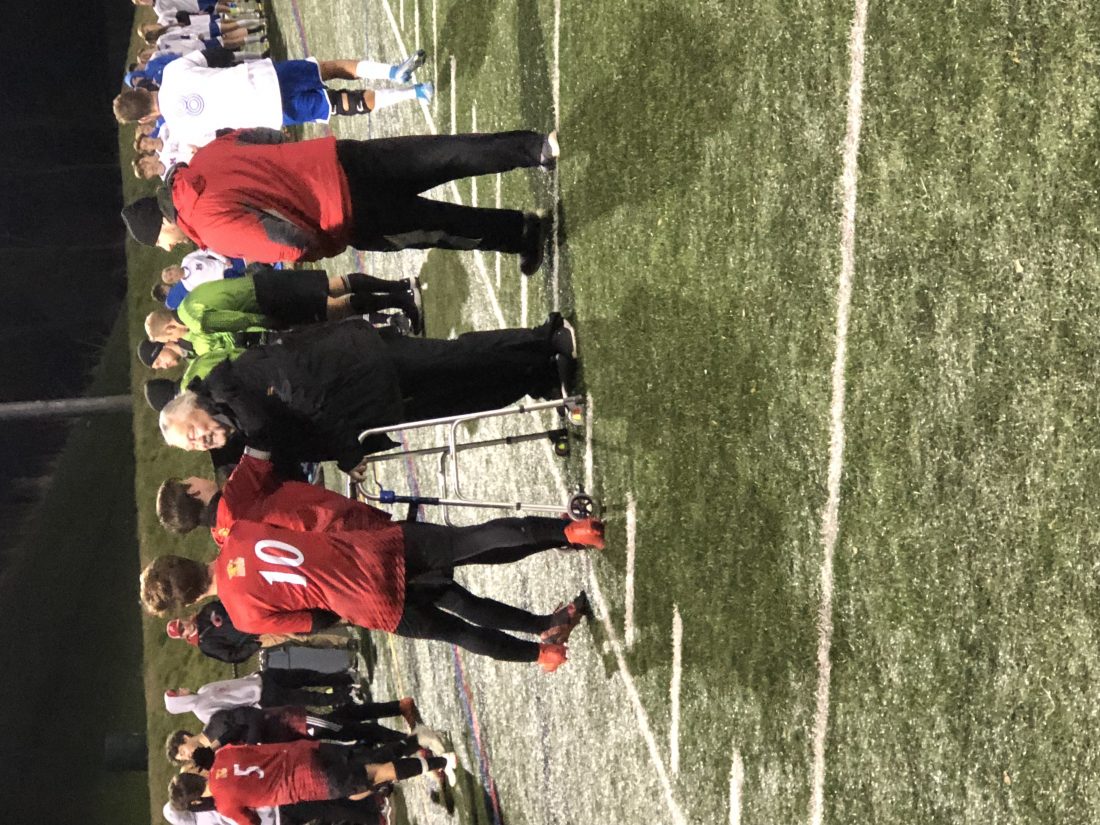 LACONIA – It took every last bit of effort, desire, and intestinal fortitude it could muster for the Campbell boys’ soccer squad to repeat as Division III champion at Laconia High on Sunday night. But it all paid off.

It took a full 80 minutes of regulation time and then nearly 18 more of overtime in bitter November weather but the top-seeded Cougars managed to squeak out a 3-2 victory over the tough-as-nails, third-ranked Mascenic Vikings to retain the D-III crown.

The locals were able to rebound from a 1-0 deficit with two second-half goals from senior forward Joaquin Heller to collect a 2-1 lead before Mascenic flew back with the tying goal in the closing minutes. And it was on to overtime.

Freshman forward Sam Gomes eventually potted the game and title-winning tally with a mere 2:17 left in the second OT to send his team and its fans into full-on celebration mode.

“It’s surreal. I never would have thought it would be me who did this,” said a smiling Gomes minutes after his huge goal.

The Cougars went undefeated through the regular season, posting a 14-0-2 record and then disposing of number 10 White Mountain Regional, number eight Prospect Mountain, and finally fifth-ranked Mascoma Valley in the semifinals to advance to the state title match again.

Mascenic went 14-2 during its superb regular season – winning 14 of the last 15 – before pushing on to the finals by knocking off 14th-ranked Laconia, number six Trinity, and seventh-seeded Hopkinton in tourney play.

When Campbell and Mascenic met up in the regular season – in Litchfield on Oct. 15 – the host Cougars managed a 2-0 success.

The locals got the first absolutely glittering chance at scoring just 1:17 into the match when senior Tyler St. Onge was hauled down by a Mascenic defender in front of the left post of the Vikings’ goal and was granted a penalty kick. But the Campbell standout was errant with his kick, putting it high above the crossbar as a golden chance fell to the wayside.

And Mascenic took full advantage of its first great scoring opportunity six minutes later, with Nathan Wilkins racing in alone on Cougars’ sophomore keeper Jack Noury and driving a sizzling shot right along the turf and well inside the right post for the 1-0 advantage.

A second superb Cougars’ scoring opportunity arose a bit later as the locals brought some consistent pressure on the Vikings’ net and its goalie Chris Wilkins. Heller got a magnificent scoring chance from close range to the right of the Mascenic keeper, who dove to his left to stifle the shot. The ball bounced off of his hands and toward the goal line behind him, but defender Jackson Cocozella was there to boot the ball away just as it was about to cross the line. He earned a big hug from his goalie for the goal-saving effort.

Play was back and forth through much of the opening half, but the Cougars wound up having a big 7-3 advantage in shots on net and they brought a good amount of pressure to bear on the Mascenic net. But they also faced that 1-0 deficit up on the scoeboard.

Cougars’ goalie Noury came up huge in keeping the deficit to one goal early in the second half when he made a big stop on another sizzling boot by Viking Nathan Wilkins, who busted his way up the middle of the field between several Campbell defenders.

And Campbell finally knotted the score at 1-1 with 26:35 showing on the clock on a scrum at the right post of the Mascenic net in which Heller thumped the ball into the netting.

The star forward would come up huge for his Cougars yet again a little more than 11 minutes later – with 15:05 showing on the game clock – when he sprinted in toward the right post and glided the ball along the turf into the net just inside the post on the other side. And the defending state champs had their first lead of the match.

But Mascenic knotted the score at 2-2 with 4:30 remaining on a pretty header by Zach Barthel off of a corner kick, and that would be it on the scoring until Gomes managed his heroics on a rebound just 2:17 before penalty kicks would have been required to decide the matter.

As exhaustion settled in during the overtimes, the players on both squads showed amazing sportsmanship in helping to stretch each other out – right on the field during play stoppages – when one of them would begin to cramp up due to the cold and efforts being exerted.

The defending champions enjoyed a total shots on net advantage of 5-2 during the intense, golden-goal overtimes, with hero Gomes hammering home the rebound of a shot which came out to him in the slot in front of the Mascenic cage.