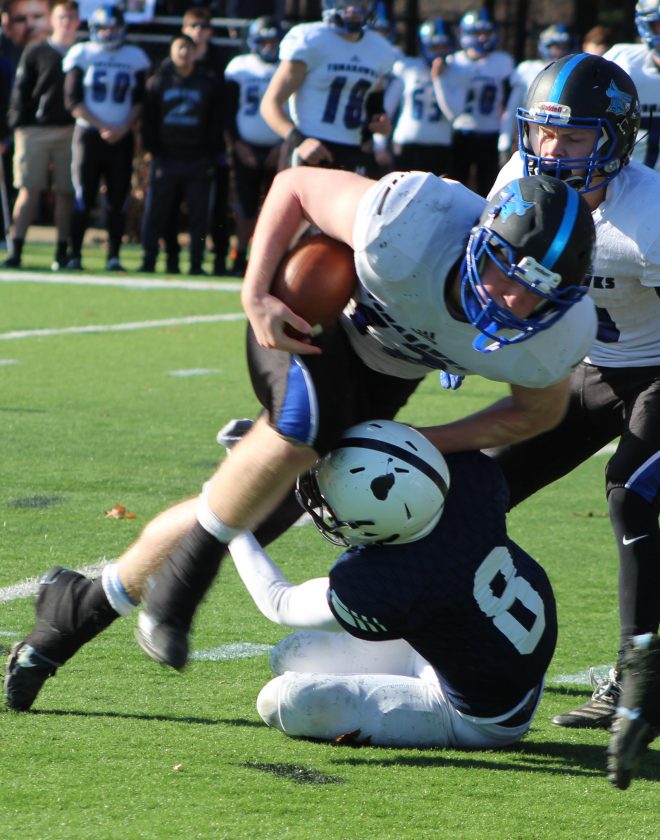 Telegraph photo by TOM KING Marrimack's Jared Dyer tries to esscape the clutches of Nashua North's Devin Bracetty (8) during Saturday's 26-7 Tomahawk win in the Divison I quarterfinals at Stellos Stadium.

NASHUA – Two weeks and a one major injury can make quite a difference.

The general concensus was that Saturday’s Division I quarterfinal between Nashua High School North and Merrimack wouldn’t follow the same script as the Titans’ 31-19 win two weeks ago. No, not with North missing all-everything quarterback and defensive back Curtis Harris due to a knee injury suffered in that game.

That was certainly the case at Stellos Stadium in the rematch, as the Titans struggled on offense, spotted Merrimack a 19-0 lead and saw the Tomahawks leave with a 26-7 win – their second playoff triumph in as many seasons over North.

“That was one of the keys we talked about beforehand, try to get up by at least two scores,” Merrimack coach Kip Jackson said, his 7-3 team back in the semis and now set to travel to Exeter next Saturday. “And putting the pressure on them to either have to throw the ball or do something they’re not used to.”

And in general, that was play without Harris. West Conference champion North (9-1), which will be idle until its Thanksgiving Eve game with Nashua South, managed just 82 total yards in the first half, and simply dug too deep a hole despite a better second half. Three fumbles, one leading to a score, also hurt North.

“You can’t dig yourself that big a hole, and three turnovers in the first half doesn’t help,” Titans coach Dante Laurendi said. “These guys (Merrimack) keep you on your toes, they keep the ball moving, they made some key plays when they needed to.

“We got a little momentum going in the second half, but we just couldn’t get it going. … Down three scores in the first half is a huge hole to climb out of against these guys.”

Merrimack opened the scoring, after turning the ball over on downs deep in North territory, on it second possession when sophomore QB Kyle Crampton delivered the first of two TD passes to back Jake Trahan, this one a 29 yarder with 4:17 left in the first period. A missed PAT left the score 6-0.

The big moments for the Tomahawks came in the final two minutes of the half, when they added two huge scores. First,

The Titans then, on Jayden Espinal’s second fumble of the game, handed things back to the Tomahawks at midfield with 1:17 left. On the very next play, Merrimack made North pay as Crampton hit Trahan in stride for a 49-yard TD with 1:07 left. The PAT kick was blocked but Merrimack was up by that 19-0 count.

“The ball that (Crampton) threw to Trahan at the end of the half was a heckuva ball,” Jackson said of his sophomore QB. “He throws the ball in really good spots.”

And Trahan was a great spot.“The last three weeks, he’s really come into his own on both sides of the ball,” Jackson said of the junior.

Still, the Tomahawks felt they should’ve been further ahead after outgaining the Titans 241-84 over the first two periods.

“It felt like we should have been up by more,” Jackson said, “because we were inside their side of the field. We had the field tilted the entire first half, but we didn’t get that third score until that big play at the end of the first half.”

North came out on fire in the second half on the strength of a Lucas Cunningham 28 yard kickoff return and 33-yard halfback option pass to Cunningham. That set up Espinal’s 1-yard TD run just 2:12 into the half, helping to cut the margin to 19-7.

But that’s where it stayed until Jared Dyer’s 7 yard TD run with 4:24 left.

“I think we did a great job as a team, we all did our job in the first half,” Dyer said. “We had a couple of plays slip in the second half, but I though we did awesome today.”

The opposite of how the Titans felt, especially without Harris. Espinal had a good day as North’s workhorse, rushing for 141 yards, but Titans just couldn’t muster up enough offense, as another drive deep in Tomahawk territory died late in the third quarter.

“It is what it is,” Laurendi said, his team also missing a few other key players from injuries earlier this year. “It’s unfortunate we don’t have (Harris), and it’s unfortunate for him. …. Our kids came out and played hard, and we just didn’t get it done.”