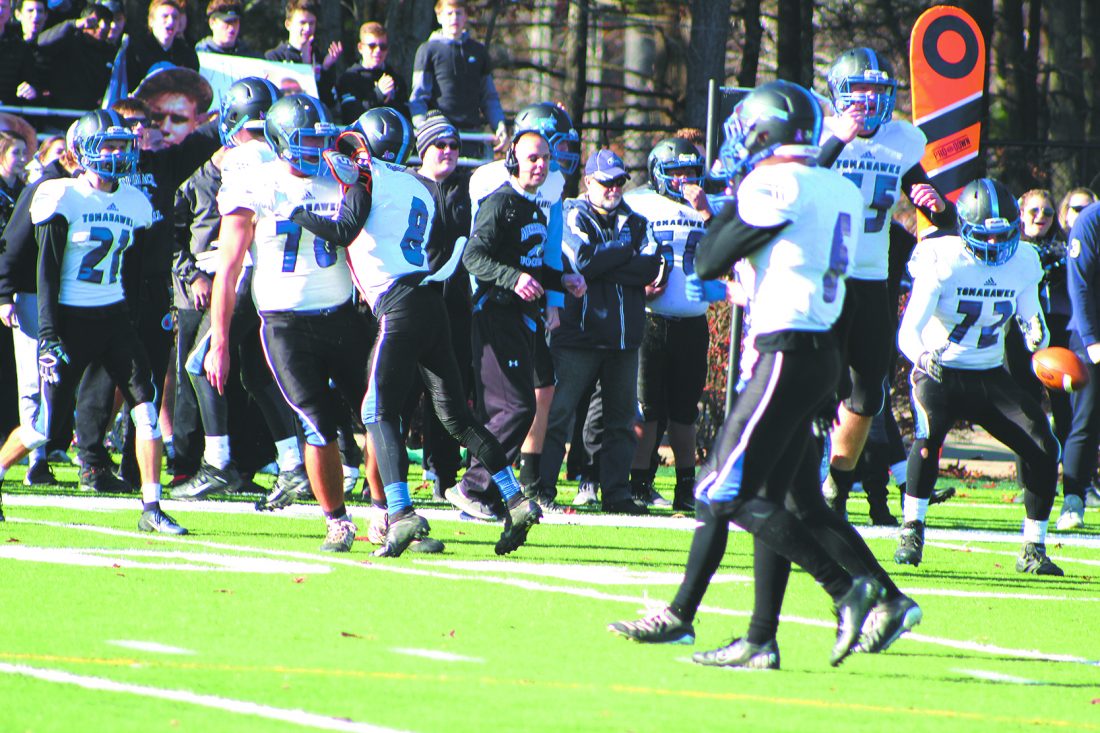 Telegraph photo by TOM KING Merrimack football players as well as the Tomahawk sideline celebrate an early fumble recovery that led to a touchdown during their 26-7 Division I quarterfinal win over Nashua North Saturday at Stellos Stadium.

And then there were three.

That’s all that remains of the eight Division I, II and III local football teams that competed in the playoff quarterfinals on Saturday.

Will any last beyond the next semifinal round en route to the finals at the University of New Hampshire on Nov. 24?

It won’t be easy. All three – Merrimack in Division I, and Alvirne and Hollis Brookline in Division II – will be on the road this Saturday.

Don’t tell the 7-3 Broncos of Alvirne that they were a No. 7 seed, as they knocked off No. 2 Milford in the Division II quarters and now get a rematch of last year’s finals, heading up to face No. 6 Plymouth. The Bobcats are 8-2 and have won six straight, including Saturday’s playoff win over

Meanwhile No. 5 Hollis Brookline (8-2) will head up to Bow to face the top-seeded, unbeaten Falcons

Here’s a look at some of the story lines from this past Saturday and what lies ahead:

The Tomahawks are headed to their second straight semifinal, and once again they will face a tough challenge against a conference champion. Last year they fell to eventual state champion Bedford.

Either way, the ‘Hawks are back to the same spot they were a year ago, albeit in a different town.

“It’s a tribute to these kids and the coaches,” Merrimack coach Kip Jackson said. “Two years in a row we’re in the semis, and three out of the last four years. But in all honesty we don’t give a crap. We want to keep going. We want two more weeks together as a team. I think that’d be great.”

It will be interesting to see if the Tomahawks have to go into this one without senior running back/quarterback James Dowling. For the second time this season he left Stellos Stadium on crutches. Back in the regular season, he suffered a left ankle sprain. This time, late in Saturday’s 26-7 win over Nashua North, he appeared to suffer a right ankle sprain.

Meanwhile, a key play late in Saturday’s win was a Devin Wood 48 yard punt that pinned the Titans at their own 7 with eight minutes to play and the score still 19-7.

“That was one of the turning points in the game,” Jackson said. “Who knew a punt could do that.”

And finally, another key player for Merrimack was junior back Jake Trahan, who had two TD receptions and also four carries for 62 yards.

“The last three weeks, he’s really come into his own on both sides of the ball,” Jackson said. “Once again, a kid who plays multiple sports, had a great off-season, and I’m really glad he’s starting to see the results of that.”

The last two weeks for the Titans, Jayden Espinal has played well in place of the injured Curtis Harris at quarterback, and also has been a force on defense.

Saturday, even as the Titans suffered their first loss of the season, was no exception. He ran for 141 yards and was a workhorse for the Titans.

“He played his butt off,” North coach Dante Laurendi said.

“We also knew he was a tough runner,” Jackson said, “and if we gave him any seams he’d be gone also.”

The other thing was the Titans came out and scored on their first possession of the second half, and made it a game.

Now the Titans will have to wait until Thanksgiving Eve to take on Nashua South.

It was a very emotional Saturday for the Panthers, falling at Exeter in a game where Jason Compoh, Chris Keefe and Co. left everything they had on the field.

In South’s case, the Thanksgiving Eve battle with North will be, if anything, a tad therapeutic. The contest has its fans and its detractors.

” I don’t mind it. I know some people don’t (like it),” said South coach Scott Knight. “It gives us a chance to look at the young kids. It’s almost like two weeks of spring ball (in college). This is tough. It would be tough to collect gear tomorrow after this. So we can go and try to clean some stuff up and just get better.”

With the game slated for Wednesday, Nov. 27, Knight will ease off the gas pedal with his troops.